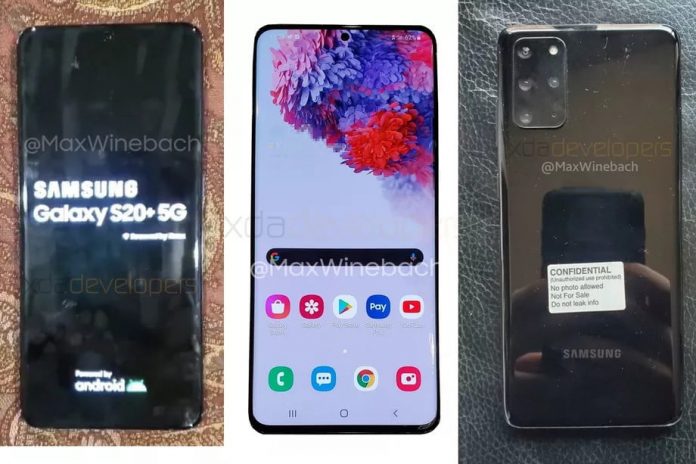 We’re barely a month away from Samsung’s February event and yet, we already know quite a fair bit about its upcoming line of Galaxy flagship smartphones except their names. Today, a new XDADevelopers report puts that mystery to rest as well and confirms that there will be no Galaxy S11. Instead, the Galaxy S10 series’ successors will be called the S20s — likely to match the decade.

The fresh leak also reveals the first live images of the Galaxy S20+ which will be reportedly the middle-child of the lineup. As previous renders have suggested, the most striking element of the new phone will be its large, rectangular camera bump on the rear. It’s expected to include a primary 12-megapixel 1.8μm sensor along with telephoto, wide-angle, and macro supplementary lenses. There’s also an LED flash and a microphone that has been possibly added to enable the company’s zoom-in video-recording feature.

While it still sports the same all-glass exterior, Samsung has made a handful of more notable alterations in the design. The tiny notch on the front that houses the single selfie camera has been relocated to the center from the corner — similar to the Galaxy Note 10 and the latest Galaxy Lite pair of smartphones. On top of that, sources tell XDADevelopers that the Galaxy S20’s screen will be relatively flatter and less curved than before possibly for better ergonomics.

Surprisingly, as per these new pictures, Samsung is also doing away with the dedicated Bixby hardware button. The Galaxy S20+ only has a set of volume and power keys. The report doesn’t shed much light on the specifications. But based on past rumors, the Galaxy S20+ might come with a 6.7-inch OLED screen, a Qualcomm Snapdragon 855 / Samsung Exynos 990 chipset, at least 8GB of RAM and 256 onboard storage, and a 4300mAh battery.

The Samsung Galaxy S20+ will launch alongside the Galaxy S20, Galaxy S20 Ultra, and the Galaxy Z Flip clamshell foldable phone. In addition, Samsung will likely have numerous separate models for 5G and 4G connectivity. The new phones will be officially announced next month on February 12th ahead of the Mobile World Congress in Barcelona, Spain.