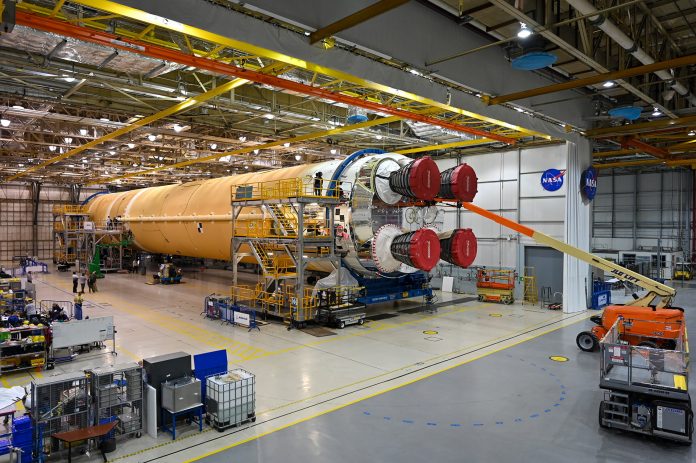 NASA and the Boeing team have removed scaffolding around the Space Launch System (SLS) rocket core stage for Artemis I and are preparing it for shipping. NASA/Steven Seipel

NASA’s next-generation rocket, the Space Launch System (SLS), has been through its share of troubles. The system has been in development since 2011 but has suffered from ballooning costs and repeated delays. However, assembly of the core stage of the rocket is now complete and the structure is ready for shipping and testing.

Assembly of the rocket core stage was completed last year at NASA’s Michoud Assembly Facility in New Orleans, Louisiana. The completed stage is 212 feet tall and had its engine section bolted on last September. With all four of its RS-25 engines attached, the mammoth rocket had to be prepared for shipping. The team used scaffolding to check all parts of the stage inside and out, and confirmed that the electronic and propulsion systems were connected correctly.

In order to move such a large object, NASA uses its Pegasus barge which can carry rocket parts across water in order to avoid the risks and difficulties of road shipping. The core stage will be shipped from New Orleans to NASA’s Stennis Space Center near Bay St. Louis, Mississippi. The shipping should take place later this month.

Once it has arrived at the Stennis Space Center, further testing of the core stage can begin. The testing is referred to as Green Run, in which the core stage will operate as one unit for the first time. In the test, propellant will be sent from the fuel tanks, and the avionics and flight computers will operate in order to fire all four engines. This will simulate the events that will occur when the rocket lifts off for real, allowing engineers to check that everything is operating as it should be.

The aim is for the SLS to be ready to carry NASA astronauts to the moon by 2024 as part of the Artemis project.