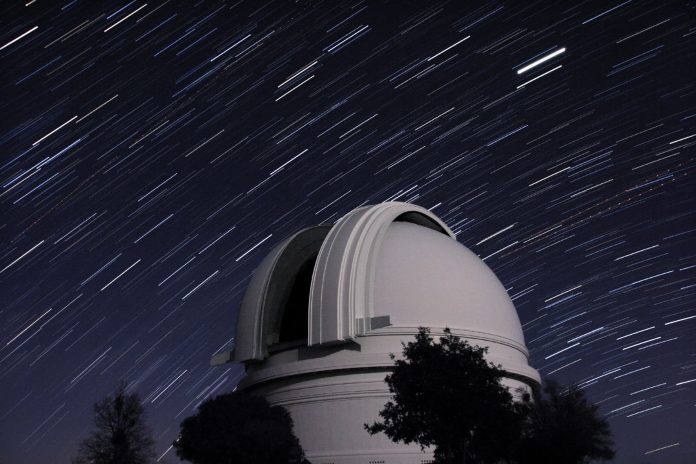 NASA has a new tool to help in the hunt for exoplanets. The New Mexico Exoplanet Spectroscopic Survey Instrument, or NESSI, is an instrument on the Hale Telescope in San Diego which has been in testing since February 2018. Now, it’s ready to start investigating the atmospheres of planets outside our solar system.

“NESSI is a powerful tool to help us meet the family,” Mark Swain, an astrophysicist and the JPL lead for NESSI, said in a statement. “Twenty-five years ago, to our best knowledge, we thought we were alone. Now we know that — at least in terms of planets — we’re not, and that this family is extensive and very diverse.”

Dedicated in 1948, the 200-inch Hale Telescope was the largest effective telescope in the world until 1993. Caltech/Palomar

NESSI uses the infrared wavelength to observe the sky, which means it can pick out cool objects like exoplanets. It detects exoplanets using the transit method, in which it observes stars to see if they have periodic dips in brightness. If they do, and these dips occur at predictable intervals, that suggests that a planet is moving between the star and the Earth. This lets astronomers work out the size of an exoplanet.

Another useful event is when the planet passes directly behind the star from our point of view, called an eclipse. NESSI looks at the light from the star before and after the eclipse, splitting the light into different wavelengths to find signatures of molecules within the planet’s atmosphere. This tells astronomers about the atmospheric composition of the exoplanets.

“We can pick out the parts of the spectrum where the molecules are, because that’s really what we’re looking for in the infrared in these exoplanets — molecular signatures of things like carbon dioxide and water and methane to tell us that there’s something interesting going on in that particular planet,” explained Michelle Creech-Eakman, principal investigator for NESSI at New Mexico Tech.

The idea is that NESSI can take the results of possible exoplanet candidates from instruments like the Transiting Exoplanet Survey Satellite and investigate them in greater detail. If an exoplanet seems particularly interesting, it can be investigated with an even more powerful telescope such as the upcoming James Webb Space Telescope. NESSI can tell whether a planet is worth investigating by looking for molecular signatures — if it doesn’t see any, that suggests the planet’s atmosphere is blocked by clouds, so it’s not a good target for further investigation.

“This helps us see if a planet is clear or cloudy or hazy,” said Rob Zellem, an astrophysicist and the JPL commissioning lead on NESSI. “And if it’s clear, we’ll see the molecules. And if then we see the molecules, they’ll say, ‘Hey, it’s a great target to look at with James Webb or Hubble or anything else.’”