HomeNewsNASA says farewell to tiny satellite that paved the way for exoplanet...
News 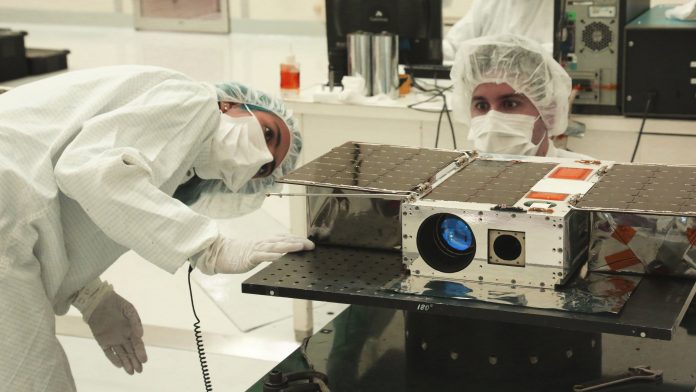 Left to right: Electrical Test Engineer Esha Murty and Integration and Test Lead Cody Colley prepare the ASTERIA spacecraft for mass-properties measurements in April 2017 prior to spacecraft delivery ahead of launch. ASTERIA was deployed from the International Space Station in November 2017. NASA/JPL-Caltech

NASA has lost contact with one of its tiniest explorers, a miniature satellite called ASTERIA (Arcsecond Space Telescope Enabling Research in Astrophysics). Operators have been unable to contact the satellite since December 5, 2019, though they will continue attempting to make contact until March this year.

ASTERIA was deployed into low Earth orbit from the International Space Station on November 20, 2017, from where it observed nearby stars in order to precisely measure their brightness. Demonstrating this was possible with a small satellite was an important step in the search for exoplanets, as far-off planets are identified by looking for small perturbations in the brightness of a star that occur when a planet passes in front of it. The satellite’s primary mission lasted for 90 days, but after this time it began an extended secondary mission which lasted for two years.

ASTERIA was a CubeSat, which is a type of small satellite that is approximately the size of a briefcase. CubeSats can be used for everything from testing out lunar orbits ahead of planned missions to exploring extraterrestrial worlds. Recent improvements in CubeSat technology include better abilities for satellites in orbit to send data back to Earth and plans for a water-powered CubeSat for orbiting the moon.

Other uses for small satellites include supporting exploratory missions, such as the MarCO satellites which helped monitor the InSight project’s landing on Mars. In the future, NASA wants to use small satellites to assist with other missions like the TESS planet-hunting satellite.

Even with the ASTERIA satellite no longer accessible, parts of the mission can still be used for scientific benefit. For example, back on Earth, NASA has kept an exact replica of the satellite’s internal hardware called a mission testbed. Scientists can use this hardware to run experiments, particularly in the area of autonomy.

“The ASTERIA project achieved outstanding results during its three-month prime mission and its nearly two-year-long extended mission,” Lorraine Fesq, current ASTERIA program manager at NASA’s Jet Propulsion Laboratory, said in a statement. “Although we are disappointed that we lost contact with the spacecraft, we are thrilled with all that we have accomplished with this impressive CubeSat.”