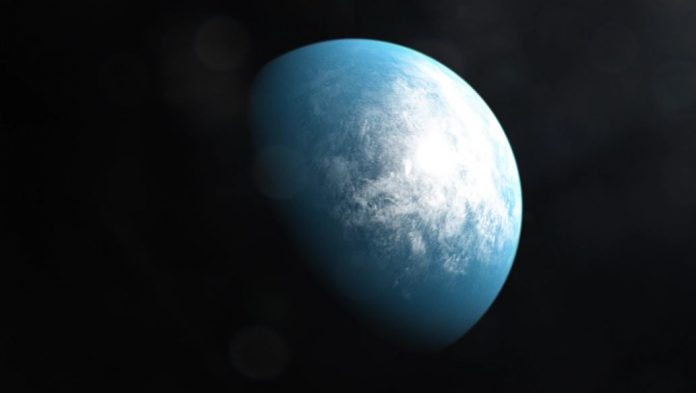 An illustration of planet TOI 700 d, based on an ocean-covered simulation of the planet with a carbon-dioxide dominated atmosphere similar to that of early Mars. NASA’s Goddard Space Flight Center/Chris Smith (USRA)

NASA’s planet-hunting telescope TESS (Transiting Exoplanet Survey Satellite) has made an exciting discovery — a planet the size of Earth which could potentially host liquid water on its surface.

TESS has found potentially habitable planets in the past, but those are generally of a size larger than Earth, called super-Earths.  The latest findings mark the first time an Earth-sized planet has been located within the habitable zone — the orbits around a star which are the right temperature for liquid water to exist on a planet’s surface. The planet TOI 700 d is located right on the inner edge of its system’s habitable zone, with the other system planets TOI 700b and TOI 700c located closer to the star.

Originally, scientists had thought that the star TOI 700 was about the size of our sun, which made the planets appear to be larger and hotter, and not like Earth. But when the scientists realized that the star was actually only 40% the size and mass of the sun, their calculations about the planets also changed and they saw that there was an Earth-sized planet in the system.

“When we corrected the star’s parameters, the sizes of its planets dropped, and we realized the outermost one was about the size of Earth and in the habitable zone,” Emily Gilbert, a graduate student at the University of Chicago, explained in a statement. “Additionally, in 11 months of data, we saw no flares from the star, which improves the chances TOI 700 d is habitable and makes it easier to model its atmospheric and surface conditions.”

This is a big step for TESS, as it has uncovered a planet more like our own than any it has located before. Researchers are now running simulations to see what kind of atmosphere and composition the planet could have, using additional data from the Spitzer Space Telescope.

“Given the impact of this discovery — that it is TESS’s first habitable-zone Earth-sized planet — we really wanted our understanding of this system to be as concrete as possible,” Joseph Rodriguez, an astronomer at the Center for Astrophysics at Harvard & Smithsonian, said in the statement. “Spitzer saw TOI 700 d transit exactly when we expected it to. It’s a great addition to the legacy of a mission that helped confirm two of the TRAPPIST-1 planets and identify five more.”

How to watch the Apple iPhone 12 event on October 13

Apple’s upcoming Hi, Speed iPhone 12 launch event is happening on October 13, and you have a ringside seat. We give you all the options for how to watch.
Read more

Diving into Genshin Impact? Here’s how to be successful early on

Need a beginner's guide to Genshin Impact? Look no further. Here's how to succeed in the first few hours of
Read more

Can I pair PS4 or Xbox One controllers to Genshin Impact on mobile?

Best answer: No, as of right now Genshin Impact does not officially support controllers for the mobile or tablet
Read more

Here are nine of the best antivirus software solutions currently available. Bitdefender Antivirus Plus gets my top vote this year,
Read more