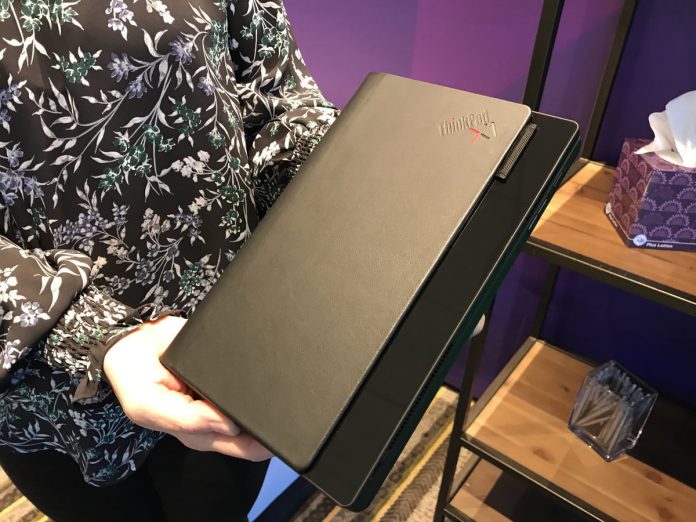 Foldable. That’s the buzzword you’ll be hearing over and over at CES 2020. Foldable phones, tablets, televisions, smart screens, and more are poised to take over this year. Except for one problem. Most of these devices aren’t ready for prime time.

Lenovo’s ThinkPad X1 Fold is different. Set for retail release in summer 2020, the X1 Fold isn’t an idea, concept, or prototype. The device I saw at CES 2020 is essentially what Lenovo will sell. It sets a new standard for foldable PC design and offers a sneak peek at what tomorrow’s portable PCs will look like.

Closed, the ThinkPad X1 Fold looks like a moleskin notebook. If not for its thickness, which gives away the trick, I could be fooled into thinking it a piece of ThinkPad swag. The leather folio outside is simple, elegant, classic, and feels great to hold.

It hides two party tricks. First, there’s a flip-out stand around back to hold the device up on a flat surface (like a desk) when it’s open. Second, the folio’s edges slide out when opened. That provides access to the stylus, which attaches to a loop on one side of the folio.

It’s almost a shame the X1 Fold is so reserved. Closed, it doesn’t scream: “Hey! I’m the future of PCs!” It looks like a thick notebook. Even weight doesn’t give it away because, at 2.2 pounds, it’s not much heavier than a notebook of similar size.

Of course, that’s all part of the plan. This is a ThinkPad, so it’s supposed to blend in at the office.

The future is unfolding

Open the folio, though, and the game is up. The ThinkPad X1 Fold unfurls into a 13.3-inch tablet with an OLED screen. The screen isn’t a stunner when compared to more conventional OLED panels, but it looks sharp thanks to its 2,048 by 1,536 resolution. It has a 4:3 aspect ratio, as well, which feels more natural than the 16:9 aspect ratio used by many Windows tablets.

It’s a nice tablet. The folding screen adds a tactile dimension that’s fun to play with. The X1 Fold isn’t just a slate. You can bend it slightly to accommodate a strange viewing angle, or close it completely for a few minutes to make more room on a desk. The leather folio is a joy to touch, adding a luxurious feel.

Now, I know what you’re thinking. What about real laptop use? What about the keyboard?

Lenovo makes a compromise, but not the one you might expect. If you want to type, you fold the device so it’s half-open. The lower half acts as the base and the upper half acts as the monitor. While you can use Windows’ virtual keyboard, Lenovo has built a tiny physical keyboard that attaches magnetically to the lower half, covering the screen and converting the device into a tiny laptop.

Yes, it’s cramped. The look reminds me of netbooks from a decade ago. Luckily, Lenovo knows how to build a keyboard. It’s great. I wouldn’t want to use it all day, but it offers excellent tactile response and a sensible layout that makes the most of the limited space available. There’s even a tiny touchpad, though I often used the touchscreen instead.

When you’re not on the go, you can use USB-C to plug the X1 Fold into a monitor and charge it at the same time. Lenovo will also sell an X1 Fold Stand that holds the open device on your desk. Used that way, the X1 Fold effectively serves as a secondary monitor alongside your main desktop display. The fold only has two USB-C ports, so you’ll need to use wireless peripherals or a USB-C dock.

Tiny, but it’s big inside

I didn’t have a chance to explore performance in-depth, but I didn’t notice any glaring issues. The device opened programs quickly. More importantly, it felt quick to convert between different usage modes and orientations. The X1 Fold isn’t a portable workstation, but I doubt it’ll have trouble with office productivity. The system will ship with Windows 10 Pro only.

What about battery life? The X1 Fold holds a 50 watt-hour battery, which is larger than I expected. Lenovo quotes 11 hours of battery life. Given the size of the battery and the hardware it’s mated with, I think real-world endurance won’t lag far behind what’s on the spec sheet.

But will it break?

Samsung’s botched Galaxy Fold launch was a bad first impression for foldables. An expensive, cutting-edge piece of tech that can be ruined by a few stray grains of sand is a hard sell. Lenovo is aware of the durability concerns, and has taken several steps to address them.

The X1 Fold’s multipoint hinge design is engineered to protect the rear of the device and minimize the chance that any foreign object will get through. Lenovo had a deconstructed X1 Fold available for inspection, and it looked promising. I couldn’t find any obvious gap that would allow debris past.

Early foldable OLEDs were easy to scratch, but the X1 Fold has a coating that’s roughly as hard as glass. It’s not invincible, but it should hold up to an occasional bump.

As a bonus, the X1 Fold’s tiny keyboard fills the small gap that normally exists between two halves of a foldable OLED device. That keeps keys or coins from wedging between the screens in the first place.

Does that mean the X1 Fold will survive the trials of everyday life? I can’t say for sure. Lenovo seems confident, and the device looks durable, but only time will tell.

Lenovo will do it

Lenovo’s ThinkPad X1 Fold is a little crazy. It looks like it should be a concept, but it’s not. The X1 Fold I held felt only a hair off the quality I’d expect from a retail ThinkPad. This is one sturdy little folio, and its unique design sets a bold new bar for foldable PCs.

While Dell and Microsoft talk about maybe releasing a foldable by the end of 2020, Lenovo is ready to put it in your hands at midyear at a predictably intimidating entry price of $2,499.

Facebook
Twitter
Pinterest
WhatsApp
Previous articleLenovo ThinkBook Plus hands-on review: E-ink note-taking right on the lid
Next articleSamsung has an invisible keyboard that you can use with your phone