HomeNewsLeaked Intel slide suggests 10900K can be up to 30% faster than...
News 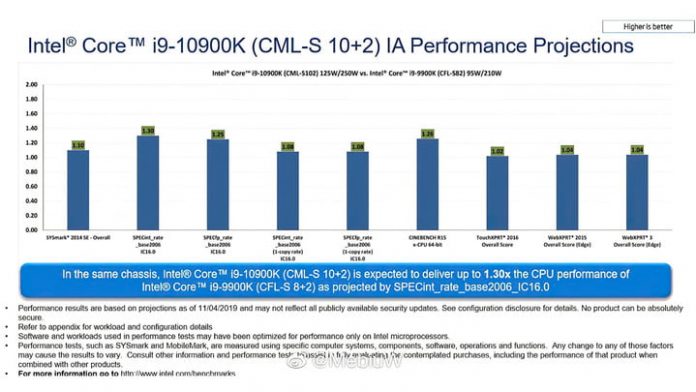 Intel’s upcoming 10th-generation desktop processors, code-named Comet Lake, aren’t expected to reinvent Intel’s well-worn wheelhouse of 14nm CPUs, but it should bring some performance enhancements. According to a leaked slide from an alleged Intel presentation, the flagship 10900K will be capable of multi-threaded performance up to 1.3 times that of the current generation 9900K. Such enhancements won’t be commonplace, though.

Intel’s desktop platform hasn’t been particularly exciting for enthusiasts and gamers over the past couple of years. AMD’s Ryzen processors have seen major advancements, where Intel, stuck on its 14nm process node and facing supply issues, has only made minor innovations. Comet Lake will be much the same, though it does bring some intriguing developments throughout Intel’s product stack. It should make six cores the average for the midrange, bring back hyperthreading for almost every chip in the line, and introduce higher clock speeds.

Intel hasn’t released an official spec list for the new generation just yet, but leaks have given us a good idea of what to expect. This latest one from a Weibo post, via Toms Hardware, looks at how the 10-core, 20-thread 10900K performs with software designed to take advantage of multiple cores. In the case of the SPECint 2006 benchmark, it managed to improve over the 9900K by 30%. That’s a sizeable uplift and showcases the benefits of higher clocks, but more importantly, two additional cores and four additional threads.

Elsewhere though, the benefits of the 10900K are less significant. Cinebench R15, which is known to scale well with additional cores, was 26% faster with the 10900K, while Sysmark 2014 SE was just 10% quicker.

Intel does note in the slide, too, that the performance was based on testing conducted in early November, 2019, and doesn’t necessarily take into consideration all the performance-inhibiting mitigations for Specter that have been released before or since. Software may also have been “optimized for performance only on Intel microprocessors.”

This slide shows that there are real benefits to increasing the core count at Intel’s top end, so that’s good to see. But it does very much look like a 9900K with a couple of extra cores, which isn’t much to get excited about if you’re an Intel fan looking to upgrade.

Hold on to your skeptical hat for now, though, as Intel may give us a clearer picture in the near future if it’s planning an early 2020 release of these new CPUs. Look out for some announcements at the upcoming CES 2020 show.