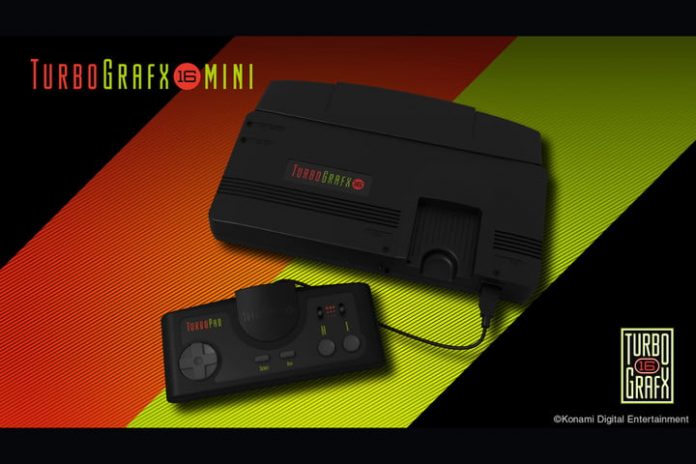 Way back in the mists of time, young me had set his heart on owning the NEC PC Engine, a game console first released in 1987. Unfortunately, at that time it was only available in Japan. The only way to get one was to import one using a third-party service, which you could typically find ads for in the back of computer magazines, because the internet wasn’t a thing back then. I remember the console taking weeks to arrive, and also having to find a Japan-to-U.K. plug adaptor to make it work, which was no easy task at that time.

Known as the TurboGrafx16 in the U.S. and the Core Grafx in Europe, it was one of the more obscure games consoles of the time; but worth every effort to get one. Now, on a stormy day in mid-January 2020, I sat in Konami Europe’s London headquarters getting reacquainted with a good old friend. I was playing the soon-to-be-released “mini” version, set to capitalize on the resurgence in interest in retro games and introduce a lot of people to a library of exciting, varied games they may never have played before.

And I was in heaven. This is the TurboGrafx16/PC Engine Mini, and it’s a little box of joy.

Nostalgia, in a good way

I was part of the first group to be able to directly capture footage of gameplay on the PC Engine Core Grafx Mini. While the little grey box on the table in front of me was familiar, it won’t be to players in Japan or the U.S., so let’s clear up any confusion over the name right now. Since this is a global release, the company has gone all-out to ensure it hits the nostalgia spot with everyone. In the U.S. it will be called the TurboGrafx16 Mini and look identical to the original, just on a slightly smaller scale. In Japan, it will be called the PC Engine Mini and come in white, while the grey PC Engine Core Grafx version will be available in the U.K., France, and Italy.

The main console is about 10% smaller overall than the original, but the controllers remain exactly the same size and fit into USB ports on the main box, attached to 3-meter (10 foot) cables. This time there are two ports, rather than a single one, and there is obviously no need to insert game cartridges — or HuCards, as they were known — on this 2020 model. The controllers are small and thin when compared to a PlayStation DualShock, and less ergonomic than Nintendo’s SNES controllers that came after it. Think original NES controllers, and you’re about right.

You’ll find a D-pad on the right, along with two buttons on the left, below two switches for altering modes, while a Run and Select button sit in the middle. It’s compact yet comfortable to hold, but did feel quite cramped after extended playtime, especially during games that require a lot of frantic movement. The D-pad also takes some getting used to for another reason, as it has a four-way movement rather than an eight-way. Practice makes perfect, just like all retro games.

The PC Engine Mini/Core Grafx Mini looks cute and fun, while the TurboGrafx16 Mini looks like the original: A bit of an ugly duckling, but we’re aware the unusual design it has its fans. However, it’s extremely heartening to see such attention to detail, something that continues when you turn the console on.

There are 57 games pre-installed on the PC Engine Core Grafx and TurboGrafx16, and it’s an eclectic line-up of titles. There are arcade standbys like R-Type, Space Harrier, Bomberman, Galaga, and Darius, plus a wide range of RPG games including both Neutopia and Neutopia 2. Additionally, there is a selection of PC Engine exclusive titles including Ninja Spirit, Victory Run, and Blazing Lazers. There’s even the rarely seen SuperGrafx version of Super Ghouls and Ghosts, plus many of the games include content originally released on CD-ROM, a sought-after hardware extra when the console was at its most popular, plus 32 PC Engine games come in the original Japanese language too.

It’s a lovingly prepared and presented list, and the animations and graphics throughout the menu are wonderful, right down to the cute PC Engine characters strutting about in the background, and the card and CD ROM loading screens. You can even choose the type of display mode you like. This setting lets you play with a 4:3 aspect ratio screen with optional CRT television filters, a stretched full-screen mode, or even a frame that resembles the handheld PC Engine GT console’s screen. The menus are clear and easy to navigate, and it’s not necessary to dig into them and waste time if you just want to play.

Bomberman ’94, R-Type, Neutopia, Victory Run, Splatterhouse, Blazing Lazers, Parasol Stars, and Ninja Spirit were among the most memorable games I played that morning. While some feel old — Victory Run, an Out Run-style driving game is quaint at best, for example — many others feel rather fresh, and not something you’d only play for a few minutes. There’s proper longevity in Neutopia, and multiplayer fun to be had with the Bomberman series. Parasol Stars, a member of the Bubble Bobble family, looks, sounds, and feels like a modern game you may play on a smartphone even.

Although the console is still a few months away from launch and still being tweaked — hence no close-up photos of the console itself — the software was mostly glitch-free, apart from a small instance of a disappearing spaceship in Blazing Lazers. The PC Engine Core Grafx happily switched between games and display styles for several hours without a problem.

What’s pleasant about the return of the PC Engine is that it won’t be instantly familiar to everyone. Most keen gamers will have played games on an early MegaDrive or PlayStation, but the PC Engine/TurboGrafx16 wasn’t as common. This means a treasure trove of highly playable, sometimes unique games unavailable on any other console awaits anyone who buys the new version, and following my all-too-brief playtime with it, it’s obvious there’s a lot of enjoyment still inside them.

When can you get one, and should you?

The $100 TurboGrafx16 Mini, 100 British pound PC Engine Core Grafx Mini, and the 10,500 Japanese yen PC Engine Mini will all be released on March 19. It’s an exclusive with Amazon, and you’ll only find it through the online retailer. Each console comes with one controller, but you can buy more for $25/22 British pounds each. If you want to play 5-player games like Bomberman you’ll need the $30/25 pound Turbo Tap multi-USB hub too. All can be pre-ordered now.

It’s a little bit more expensive than the PlayStation Classic and Nintendo’s SNES Classic Edition; but it does come with a lot more games, the majority of which we’ll bet you’ve never played, making it a good value. The variety of games — platformers, shoot-em-ups, RPGs, fighting games, and more — mean you should keep coming back to it too, ensuring it’s not a one-time trip down memory lane. Whether you owned a PC Engine or TurboGrafx16 before or not, the new Mini versions have masses of appeal. We’ll wait to play the final version before passing judgment, but things are looking very, very good indeed for the return of one of the best late 80’s consoles that you may never have tried out at all.