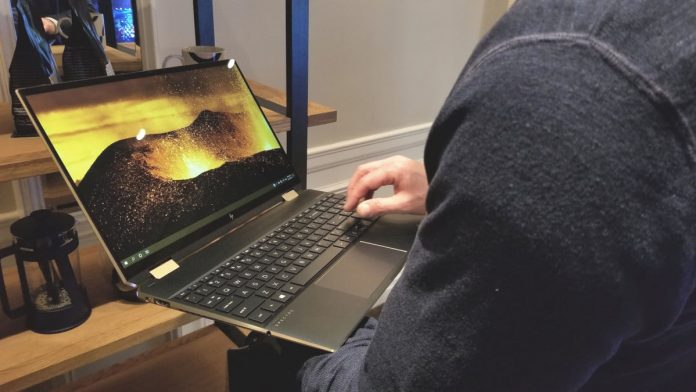 The chunky bezels of the previous versions were shaved off, leaving behind the sleek, small, chassis of its flagship 15-inch laptop. But there’s more to HP’s new laptop than just good looks. Thanks to some brand new internals from Nvidia and Intel, this also the most powerful-looking Spectre ever made too.

Much like with the smaller x360 13, this new design was accomplished by slimming down both the size of the webcam, cutting the bezels around the screen, as well as moving the hinges to become part of a strengthened CNC part under the display panel.

The webcam also now uses a module that’s even smaller than the one on the Dell XPS 13, and it still has Windows Hello support. Put together, this all means the screen to body ratio is now 90%, which is an improvement over last year’s 80%. For a 15-inch device, this makes the Spectre quite portable and compact for travel.

But that’s not all that stole the show. The looks of the Spectre x360 still wowed me. While it still felt a bit thick, HP says that it slimmed the side profile of the device by 17.36 mm. It really is hard to beat HP’s design aesthetics, down to the signature “Nightfall Black” color with its “Copper Lust” accents.

The dual-chamfer, diamond-cut edges that make Spectre so unique are all still here. The ports haven’t changed either, still offering two USB-C, full-size HDMI 2.0 port, a USB-A 3.1 port, and a Micro SD card reader. At a time when everyone favors all USB-C, it’s hard to find this type of connectivity in a machine in 2020, and I appreciate the inclusion of these “legacy” ports.

There was a point when Full HD displays (FHD) were the most common resolution in laptops, but that’s slowly shifting more to 4K resolution. We’ve seen this in ThinkPads, and even gaming laptops like the Razer Blade Stealth. This is something that HP also understands, and I am quite happy about, especially since more content creators are using HP Spectre devices in their lives.

While last year’s Spectre x360 15 model offered up an option for FHD resolution display, this year, HP is only offering it in 4K displays across the entire lineup. It’s a decision that HP tells me it chooses to make because it found users wanted the most performance out of their Spectres.

But HP is not using just your ordinary 4K panel. This year’s Spectre x360 15 comes with options for three different 4K panels. It ranges from regular 4K, lower power 4K, and OLED 4K. Don’t worry if that terminology doesn’t immediately ring a bell.

Essentially, the regular 4K panel is one that you will find in ordinary laptops. It is a panel that draws 3.5-4 watts of power from the battery inside your device. This is similar to what we had when we reviewed last year’s model, with the battery lasting us about 8.5 to 12 hours in most tests.

The lower power 4K panel, meanwhile, is different from the other option as it draws just 2 watts of power. With this option, you should expect for the Spectre x360 15 to last longer than before. HP promises that the Spectre x360 15 model with a low-power panel can last for up to 17 hours and is claiming the longest battery life in a 15-inch 2-in-1. We will need to test that ourselves later, but any extra battery life is highly appreciated.

Finally, there’s the OLED 4K panel. Much like the one on the Spectre x360 13, this one will give you amazing contrast levels, as well as deeper blacks. It’s the one that I was checked out, and it looks as beautiful as ever.

While the brightness will peak at 400 nits, HP says that the Spectre x360 15 with OLED 4K panel shares the same features as the smaller Spectre. That includes a 30% wider color gamut for accurate colors, as well as the “HP Display Control” software that has special color space presets. We complained previously that the 4K display on last year’s Spectre wasn’t good for content creation, so this looks to change that up.

When I played with my demo unit, the yellows and blacks of the default wallpaper were quite vibrant. Coming off using my 15-inch Surface Laptop 3 during HP’s briefing, I was quite jealous of how immersive and realistic colors and other items looked on the screen of the Spectre.

The Spectre x360 15 has long been about its processing power, and the 2020 model is no different, but it does look to push things a bit further. Following along with other laptop makers, this year’s x360 15 models are going with Intel’s 10th-gen CPUs.

However, unlike other laptops that come with Intel’s Ice Lake chipsets, HP is opting for Comet Lake CPUs. This is a decision that HP tells me was all about power.

HP wants you to get the most out of the 2-in-1, which is why you’ll still find an option for both a four-core, as well as a six-core Intel processor onboard the Spectre x360 15. This sets it apart from other 2-in-1s and puts it in the same class as some 15-inch clamshell laptops like the XPS 15. The unit I was on board with sported a four-core Intel Core i7 processor, but it still was plenty fast for web browsing, and a lot of the tasks I threw at it, which makes me believe the 6-core model will be even better.

HP didn’t provide generation over generation performance claims, but it did tell me that it worked with both Nvidia and Intel to ensure that the Spectre performs just as well, if not better, than last year’s model. It’s also promised that these new Nvidia graphics cards will be able to “accelerate photo editing” and boost the performance of 3D content creation.

Since we already were able to punch out some solid 1080p gaming in last year’s model in Battlefield 1 and even Assassins Creed Odyssey, this is something I’m sure will be true on the newer model too. We look forward to testing it, but it will likely even perform better in our intensive video encoding tests as well.

The other big complaint on the Spectre lineup was its lack of a Microsoft Precision touchpad. As I continued to play with the Spectre x360 15, this is something I was happy to see that changed. Its surface is around the same size as before and is still smooth for scrolling. However, the addition of precision support now means that Windows 10’s multi-touch gestures are now available. You can swipe to navigate apps and pages. I’m glad HP finally got this right.

The near-perfect 2-in-1 is now more perfect

When we last reviewed the Spectre x360 15 our major gripes were with the touchpad, and its overall weight and size. Now that HP has slimmed the display bezels, added support for Microsoft Precision touchpad, and is promising for some improved performance and battery life under the hood, the Spectre x360 15 might as well be the perfect 2-in-1. It’s set to go on sale in March for prices starting at $1,600.