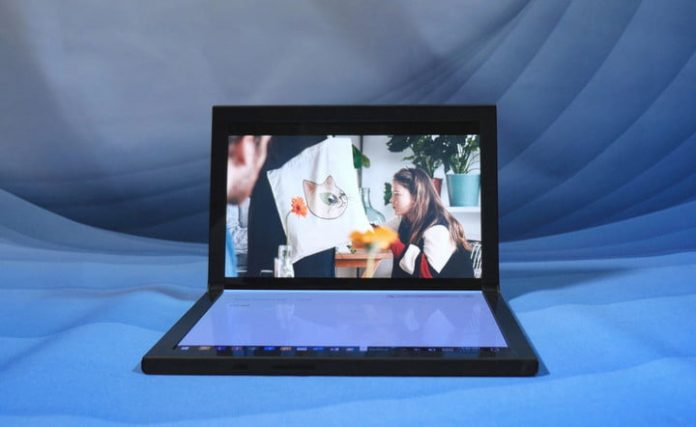 To our delight, dual-screen and foldable PCs have emerged as an important trend at CES this year. After Microsoft announced its own dual-screen PC last year, the Surface Neo, Microsoft’s partners are now taking the CES stage and showcasing similar devices.

These are exciting, often conceptual new devices, and they’re making us pretty excited for the future of the PC.

The first of the set of dual-screen devices is the Dell Ori. This is just a conceptual device, so it is not something you can purchase — for now. Short for Origami, the Dell Ori features a screen that folds in half, similar to the Samsung Galaxy Fold. However, it isn’t meant to replace your phone. It is, though, shaped like a notebook. You can fold it and hold the device in portrait mode, or horizontally.

When we went hands-on with it, we found that it was thin and light. Dell didn’t provide any specs on the Ori, but we do know that it sports a 13.4-inch screen that folds in half like a piece of paper. We also know that the device has a single USB-C port on the bottom, runs a full version of Window, and as of now, doesn’t have a keyboard. This makes it one of the more limited prototypes in this form factor, since a Windows device without a keyboard can be difficult to use.

Next on the list is the Dell Duet. This is yet another concept, but this one’s a bit more fleshed out. Unlike the Ori, the Dell Duet sports two distinct screens, and is the size of a traditional 13-inch laptop. We went hands-on with it and were happy to see that it was made out of aluminum and has a finish and build similar to Dell’s XPS 13 laptop.

The similarities to a laptop end there, though. When the lid of the Duet is opened, you’ll find that it sports two 13-inch screens, with a thin bezel. It also has a 360-degree hinge and has a Bluetooth keyboard that you can detach. That keyboard can also be placed on the bottom screen so you can get an on-screen trackpad for a more laptop-like experience. Pen support is here too, allowing you to ink on either of the screens when needed.

Then, there is the ThinkPad X1 Fold. This is a PC that you’ll actually be able to go out and purchase. It will be coming by the end of 2020 for prices starting at $2,500. Configurations include Intel’s Lakefield processor, as well as 8GB of RAM and up to 1Tb NVMe storage. At launch, that’s all powered by Windows 10 Pro, though a Windows 10X will be offered later in the year.

When we went hands-on with the ThinkPad X1 Fold and were quite impressed. On the outside, the ThinkPad X1 Fold looks like a moleskin notebook, with a leather folio finish. It also has a flip-out stand, and supports a stylus that can be attached to a loop. Weight comes in at 2.2 pounds, and on the inside, the device sports a 13.3 inch foldable OLED screen. Specs on the screen include the following: 2,048, x 1,536 resolution, and a 4:3 aspect ratio. We found the ratio felt more natural.

Much like Duet, Lenovo also has a physical keyboard that you can attach to the bottom screen of the X1 Fold. But Lenovo’s is larger, offering a more comfortable typing experiences that covers the entirety of the bottom screen. Lenovo’s also includes a small touchpad at the bottom. This means the X1 Fold can replicate the experience of a laptop a bit better than others.

Finally, there is the Intel Horseshoe Bend concept. This device is different from all the others on the list, as it is a 17-inch foldable. This is the only foldable PC we’ve seen at this size, but Intel says the larger form factor is ideal for this type of device.

When folded shut, it’s the same footprint as a standard 13-inch laptop. But when you unfold it and prop it up like a laptop, you have access to the two sides of the 17-inch OLED screen. You can, of course, also hold it open and use it as a very large tablet. It’s glorious. Intel didn’t show off a keyboard solution though, which would make using such a device a bit difficult.

This one, more than any, is not a product Intel will likely manufacture. It’s a concept, through and through. Fortunatley, the idea of a 17-inch foldable PC is likely one we’ll see again.

The Honor MagicBook Pro costs a third of Apple's MacBook Pro, but does it provide enough value to tempt a
Read more

Videos with the #Trump2020 hashtag have clocked over 10 billion views on the platform.What you need to knowTikTok is lobbying
Read more