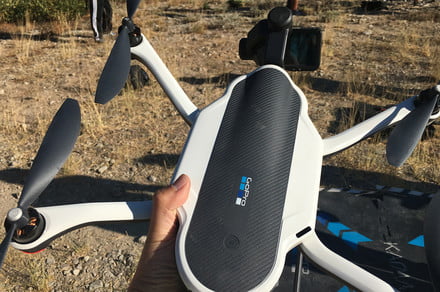 Remember the Karma drone? It was GoPro’s attempt at making a consumer quadcopter to take on market leader DJI. The company launched it in November 2016 but lack of sales prompted it to abandon the device in 2018.

Since then we’ve heard little of the device, but there are still Karma owners out there flying the machine. Or at least, they were until January 1.

Spotted by The Verge, GoPro’s online forum has been hit with messages from Karma pilots around the world complaining of problems getting the drone to fly.

The posts all describe the same problems with the Karma, specifically, that since the start of the year it’s become impossible to pick up a GPS signal and to perform the pre-flight procedure of compass calibration  — issues that are preventing Karma pilots from flying their drones.

One owner in the U.K. wrote, “I used the drone in the same place 2 days ago. Now it says compass failed and no GPS. The only thing I’ve done today is reformat the SD card to clear it. Has anyone found a solution to this problem yet?” Another said, “Flew it yesterday, today a no go … I spent quite a bit of time on chat with a GoPro agent and she had no answers.”

Considering the nature of the problem and the date when it started, it seems the problem is related to the GPS rollover issue that began to impact the functionality of various GPS-enabled devices in April 2019. The issue prompted tech manufacturers to roll out updates to ensure that affected devices could continue to operate after January 1, 2020. If this is indeed the cause of the Karma’s problems, GoPro should have issued a software update before now in order to avoid the problems that owners of the machine are now experiencing.

On January 5, GoPro responded on Twitter to a user asking when a fix will be issued with the message: “We will definitely post an update once we hear back from our product team. Thank you for your patience and understanding.”

We’ve reached out to GoPro to try to obtain more details and will update this article when we hear back.

Few will dispute GoPro’s ability to produce a great action camera, but an awesome drone? Not so much.

A short time after the Karma’s launch, a number of owners reported battery failures that caused the machine to fall out of the sky mid-flight. The resulting recall dented the Karma’s reputation, making it even harder for GoPro to survive in the highly competitive drone market.

It was also impacted heavily by DJI’s Mavic Pro, which arrived just days after the Karma and came with obstacle avoidance and auto-tracking, both of which the Karma lack.

GoPro exited the drone market in 2018, but those who continue to use its quadcopter will still expect the company to resolve this latest issue soon.