Home News Google rumored to be creating another chat app — this time to...
News 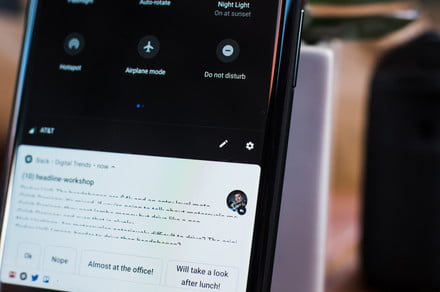 According to The Information, Google is working on a unified messaging app for businesses that aims to take on similar apps from Slack and Microsoft Teams.

Supposedly being tested internally, the app would contain functionality from the company’s Hangouts brand, including Hangouts Chat and Hangouts Meet. It would also bring together key elements of Google’s G Suite, including Google Drive and Google Docs. This would make the unnamed app a handy hub for businesses, many of which rely on Google’s free G Suite to replace costly subscriptions for services like Microsoft Office 365 package.

The app would have a hard road ahead of it if it’s to take on both Slack and Microsoft Teams. Slack has built itself a small empire as the most well-known chat app for businesses, with an intuitive approach to design and functionality that reaches into many other apps, including Google’s own G Suite. Microsoft Teams is the other major player in the scene and is included as part of the Office 365 subscription. While not as immediately intuitive as Slack, Microsoft Teams carved its own niche and claimed in July it had surpassed Slack’s daily user numbers.

So with one of the world’s biggest companies knocking at their doors, should Slack and Microsoft be worried? Perhaps not. Google hasn’t exactly had the best record with messaging apps — remember that period in 2016 when Google was inexplicably running six messaging apps at once? While apps like Allo and Spaces showed promise, most languished in obscurity before being axed. Digital Trends even wrote a heartfelt goodbye to Allo when it was shut down in March 2019. Certain key aspects of Allo were folded into Google’s other messaging apps, but the experiment was still broadly thought of as a failure.

With the number of apps and experiments Google has killed over the years, the odds aren’t great for this nascent chat app for businesses — and Google has previously tried to muscle into established spaces and failed. Google Plus, anyone?

Still, if Google chooses to put its heft behind the as-of-yet unnamed app, there’s no reason why it couldn’t build itself a respectable audience. We’ll be keeping an eye on this as rumors develop, and we’ll be sure to report back when we hear more.

Facebook
Twitter
Pinterest
WhatsApp
Previous articleTwo orbiting satellites could collide tonight over Pittsburgh
Next articleMicrosoft wants to use A.I. to make health care better for everyone

These Galaxy Watch Active bands will give your wearable new life

Being active doesn't mean you should skimp out on looking fashionable! The Galaxy Watch Active is one of the best
Read more
News

These are the best Bluetooth trackers to keep tabs on valuables

Once upon a time, you'd lose track of your keys and spend precious time searching for them. Now, you have
Read more
News

These Galaxy Watch Active bands will give your wearable new life

Being active doesn't mean you should skimp out on looking fashionable! The Galaxy Watch Active is one of the best
Read more

These are the best Bluetooth trackers to keep tabs on valuables

Once upon a time, you'd lose track of your keys and spend precious time searching for them. Now, you have
Read more

Microsoft to Stop Supporting Office 2016 for Mac in October