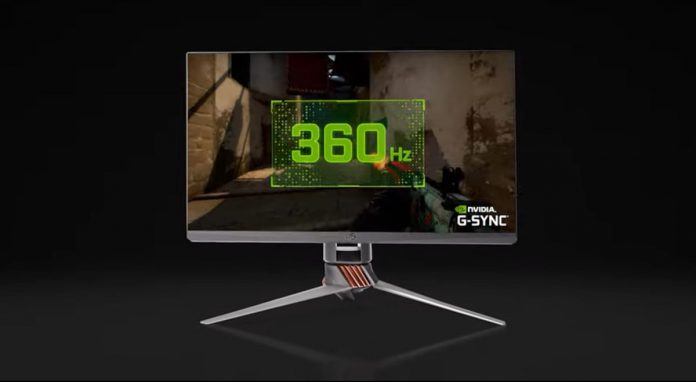 It was all a blur. Literally.

I found myself standing at Asus’ CES 2020 suite, watching canned gameplay slide across two monitors at an incredible rate. One monitor was refreshing at 360Hz, the other at a mere 240Hz. I leaned forward for a closer look.

Suddenly, I felt as if the room was about to tip on one side. A nearby Asus rep gave me a knowing smile as I stepped back to catch my balance.

This is just one of many gloriously stupid monitors I saw at CES 2020, as Acer, Asus, Razer, and Samsung decided to go all-in on monitors. I can’t help but wonder if the incredibly expensive monitors they showed off are necessary. I also can’t help but want them.

Let’s start with the monitor that almost had me on my ear. Asus’ ROG 360Hz is one of several displays with an absurdly high refresh rate being promoted at CES 2020 (Acer and Razer have a 300Hz display coming to laptops).

For those unfamiliar, 360Hz means the display shows a fresh image 360 times per second. A typical office monitor refreshes at 60Hz, or 60 times per second. Gaming monitors have crept toward making 144Hz the norm. Asus’ ROG 360Hz more than doubles that.

Let’s be honest. A 360Hz refresh rate is kind of dumb. You’ll only see the benefit if the game you’re playing can render at 360 frames per second or more. That’s just not possible with most computers, in most games. Some games (like the Battlefield franchise) have engine framerate caps that sit well below 360 FPS. A 360Hz monitor is like a gaming desktop with 64GB of RAM, or a gaming mouse with a 20,000 DPI sensor. It usually doesn’t make sense.

And yet, I did see a difference, even against the 240Hz display. The 360Hz refresh rate improves clarity during fast movement. The result? I could make out fonts, icons, and character details that weren’t quite visible on the 240Hz display. I also tried a reaction time demo that clearly showed the advantage of 360Hz in games like Counter-Strike: Global Offensive, where a few milliseconds can make the difference between victory and defeat.

There is method behind the madness, yet I still think it’s a bit daft. 360Hz? Really?

There is method behind the madness, yet I still think it’s a bit daft. 360Hz? Really? Granted, it can help you spot the tiny particle effects of an incoming attack as you zoom across a League of Legends map at warp speed. It can help an e-sports pro clinch victory on a tough shot through a door that’s barely open. There are reasons. For most gamers, however, this display is nuts.

If you don’t care about refresh rate, but you do care about image quality, don’t worry. CES 2020 has you covered with a laundry list of tech-packed monitors that you almost certainly can’t afford.

Mini LED monitors are a thing. They use hundreds or thousands of individual LEDs to light up the screen, providing more control over picture quality. Darks can appear darker, and bright can appear brighter.

Asus’ ROG Swift PG32UQX, the first VESA DisplayHDR 1400-certified monitor, is a brilliant example of what Mini LED can do. It’s so brilliant, in fact, that taking photos of the monitor proved a real pain. The searing light of an explosion completely freaked out my poor iPhone. Acer also brought a Mini LED display, the Acer Predator X32, to CES 2020.

Those 32-inch monitors look tiny, though, next to the biggest monitors at the show. Asus’ brought the ROG Swift PG43UQ, a 43-inch display with a 144Hz refresh rate and VESA DisplayHDR 1000 certifications. Acer and Viewsonic, meanwhile, brought their own 55-inch OLED monitors.

I have no beef with Mini LED or OLED. Both are a huge improvement over the edge-lit IPS monitors we’re used to. What I do have a problem with is the price.

Acer’s Mini LED display, the Predator X32, will sell for $3,600. The company’s 55-inch Predator CG552K will sell for $3,000. And the curved Acer Predator X38 will retail for $2,400. Similar monitors from Asus, Samsung, and Viewsonic haven’t had pricing announced, but I doubt they’ll be more affordable.

That’s insane. You can walk out of Best Buy with a 4K television for under $500, so why pay $3,000 for an OLED from Acer? Why would anyone buy the Acer Predator X32 when you could buy a 75-inch television for the same price? I know, I know. Monitors and televisions don’t fit in the same space. But it’s the principle of the matter. The pricing doesn’t feel fair.

As if to underscore this dilemma, Nvidia and LG announced a strengthening of their ties at CES 2020. All of LG’s new OLEDs will be compatible with Nvidia’s G-Sync. That’s in addition to LG’s 2019 lineup, which already supported it. You can buy a world-class OLED television and use it as a display for your gaming PC. And if you can do that, why would you pay thousands for an OLED monitor from Acer or Asus?

Don’t get me wrong. This is a good problem to have. The monitor revolution that started in 2015 has hit its stride. Designs that were once exotic, like widescreen or high-refresh displays, are common. More choice is great.

Still, I can’t help but feel CES 2020 is overshooting the mark. A 360Hz display is awesome. Mini LED is awesome. But what I want to see is a 27-inch OLED (or even Mini LED) monitor with a decent response time and a 144Hz refresh rate priced at $600 or less. A display like that would massively improve quality for PC gamers.

It’s just not meant to be. Not yet. For now, gamers must settle for gawking at crazy-go-nuts monitors with intoxicating specifications and a price tag to match. They’re awesome. No doubt about that. But you’d have to be high to buy one.

Facebook
Twitter
Pinterest
WhatsApp
Previous articleWith Ryzen 4000, does AMD finally have a real shot at winning the laptop race?
Next articleSay hello to Impossible Pork: The next generation of fake meat