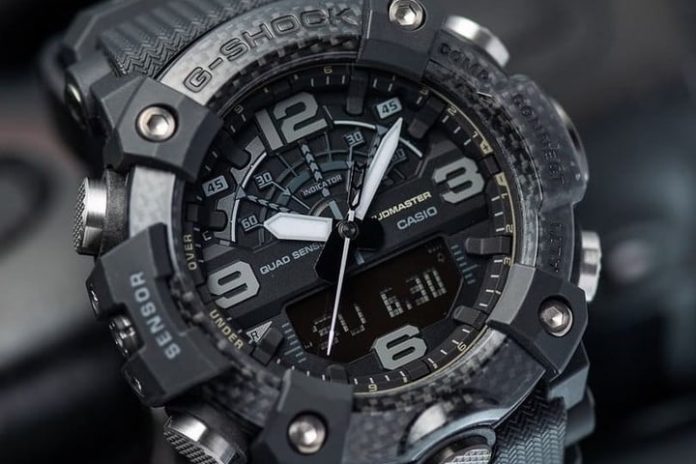 You want a stealthy watch? What about one that’s so completely blacked-out, and so hardcore, that it may as well be a ninja? If that sounds about right, you’ll want the new Black-out Mudmaster watch from G-Shock, a new-for-2020 color added to the updated Mudmaster range introduced early last year. Like the other versions, the brand new Mudmaster has Bluetooth and can connect to your phone.

What’s changed over the existing models? After all, the black Mudmaster we reviewed in August 2019 is already pretty tough-looking. The new GG-B100-1BER (to give it its official name) is entirely black, with silver buttons, gray text on the bezel, and crucially, a reverse LCD. This means the numbers and letters for the time and date information are set against a dark background, giving it a sleek, stealthy look.

The black-out Mudmaster shares the same Carbon Core Guard structure that makes the new model much smaller, lighter, and more wearable than previous, tank-like, Mudmaster watches from G-Shock. The monocoque is made from a carbon composite for strength and light weight, and that toughness means there’s no need for button guards that add so much bulk. The result is a watch that’s still obviously a Mudmaster, but not one that doesn’t fit under the sleeve of your shirt.

Bluetooth is another new feature on the updated Mudmaster. While the watch isn’t a traditional smartwatch, the app on your phone does make it easier to adjust certain functions such as changing the time, setting alarms, and altering the world time setting. Additionally, the Mudmaster’s mission log tracks activity, maps GPS data, and records altitude alterations, then plots it on a handy graph inside the app on your phone. Finally, the Mudmaster will count your steps each day. This can be shown in the app, or on the watch’s LCD.

The watch takes its name from the sealed case which prevents dirt, soil, and other particles from entering the body of the watch, keeping it operational even in the toughest, wettest, muddiest environments. The Mudmaster does not need charging, and the battery inside should last for about two years before it needs replacing.

The GG-B100 Black-out Mudmaster has been joined by a Black-out Rangeman model in G-Shock’s range too. The GW-9400-1BER is similarly stealthy looking and this time benefits from solar power, but it does not have a Bluetooth connection. Both watches are water-resistant to 200 meters, and provide shock and vibration resistance.