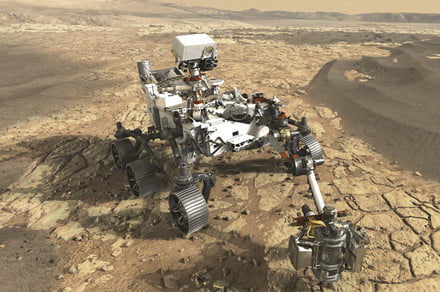 NASA has announced the semi-finalists in its contest to name the Mars 2020 rover.

The space agency has selected what it considers to be the best 155 suggestions among tens of thousands of entries from students across the U.S. And no, Rover McRoverface doesn’t get a look-in.

You can see all 155 proposals here, along with the short essays sent by each entrant to back up their suggestion.

“A cool way to engage the next generation”

“This rover is the first leg of a round-trip mission to Mars that will advance understanding in key science fields like astrobiology,” Lori Glaze, director of NASA’s Planetary Science Division, said in a release. “This contest is a cool way to engage the next generation and encourage careers in all STEM [science, tech, engineering, and math] fields. The chosen name will help define this rover’s unique personality among our fleet of Martian spacecraft.”

NASA describes its Mars 2020 rover as a 2,300-pound (1,040-kilogram) “robotic scientist” that will be given the job of hunting for signs of past microbial life on Mars, while also gathering samples and conducting research to aid possible human exploration of the planet.

The next stage of the contest will see judges whittle down the proposals to just nine finalists, after which the public will have a chance to vote for their favorite name in an online vote later this month.

“The results of the poll will be a consideration in the final naming selection,” NASA said, meaning that its team of judges will have the last say.

The nine finalists will talk about their ideas with a panel of experts, including Glaze, NASA astronaut Jessica Watkins, NASA Jet Propulsion Laboratory rover driver Nick Wiltsie, and Clara Ma, who proposed the name for the Mars Science Laboratory rover, Curiosity, as a sixth-grade student in 2009. The grand prize winner will be announced in early March 2020.

And as if having your name forever attached to the Mars 2020 won’t be enough, the winner will also be invited to watch the Mars mission launch from Cape Canaveral Air Force Station in Florida in July 2020.