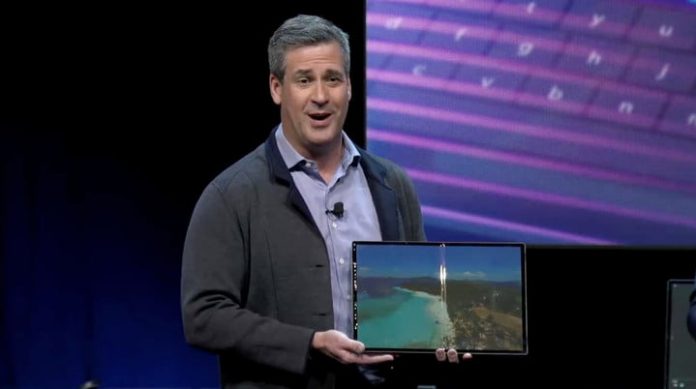 Intel showcased “Horseshoe Bend” during its CES 2020 keynote on Monday. It’s a concept device based on research conducted by the company, which showed that end-users simply want a larger, foldable device.

Intel’s Corporate Vice President of Mobile Platforms Group Chris Walker entered the stage with Horseshoe Bend and dubbed it as the world’s first 17-inch foldable OLED PC. Think of it as a laptop with a single, foldable screen without a seam disconnecting the lid from the keyboard. Fully open the clamshell device and you have a 17-inch display. Close the device, and it sports a 13-inch footprint.

Walker didn’t talk about the hardware within at first, but instead focused on demonstrating the possibilities of a unified screen. He showed how users could stream a video on the top portion and scroll through additional videos on the bottom portion. He then opened the prototype into display mode and streamed full-screen video.

What’s notable here is that end-users could have a desktop-like experience in the office, home, or away on business trips. Simply grab a tablet stand, a mouse, and a keyboard and you have a working desktop without the bulk. You also have the benefits of an OLED screen, which consumes less power than LCD panels.

Intel’s “Horseshoe Bend” appeared after Lenovo introduced the world’s first foldable PC, the ThinkPad X1 Fold. Based on Intel’s Core “hybrid” technology, in the form of the recently revealed Tiger Lake processors, the device sports a foldable 13.3-inch OLED screen and 5G connectivity. It’s built for all-day computing and weighs less than one kilogram. Like Intel’s prototype, the screen can split tasks or serve as a single viewing experience, like a tablet.

Dell also announced a couple of new dual-screen devices at CES, one with a foldable screen and one with two distinct screens. The ball started rolling on dual-screen devices last fall with the announcement of Microsoft’s Surface Duo and Surface Neo. Which of these devices run on that same Tiger Lake processor is unconfirmed, but

The first RTX 4080 laptops are much cheaper than we expected