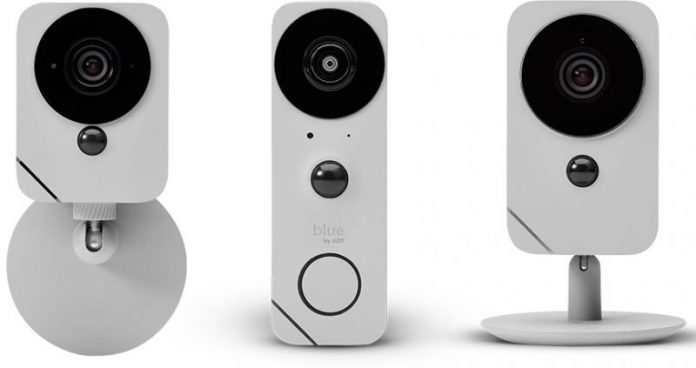 Home security company ADT today announced a new range of smart home products with forthcoming HomeKit support, including an indoor camera, outdoor camera, video doorbell, and Wi-Fi range extender that doubles as a doorbell chime. All are part of the new Blue by ADT brand, known as LifeShield until now.

ADT’s doorbell features 1080p video recording, a 180-degree field of view, night vision, custom motion detection zones, two-way talk, a water-resistant design, and more. The biggest feature of all will be HomeKit support, as there are currently only a few video doorbells that support Apple’s smart home platform.

From left to right: outdoor camera, video doorbell, and indoor camera
HomeKit support will allow users to receive an instant notification when someone rings the doorbell, leading to a live video stream in the Home app when tapped. HomeKit also means Siri support for controlling the doorbell with voice commands. Unfortunately, ADT will not be adding HomeKit or Google Assistant support to the doorbell until the second quarter of 2020, according to The Verge.

ADT’s indoor and outdoor security cameras offer many of the same features as the doorbell, including 1080p video recording and two-way talk, but they have a slightly smaller 130-degree field of view.

All four products are available to pre-order starting today and will begin shipping before the end of January. The cameras and doorbell are priced at $199.99 each, while the Wi-Fi extender runs $49.99.

ADT says additional security system components, including a base, keypad, and sensors, will launch in spring 2020.