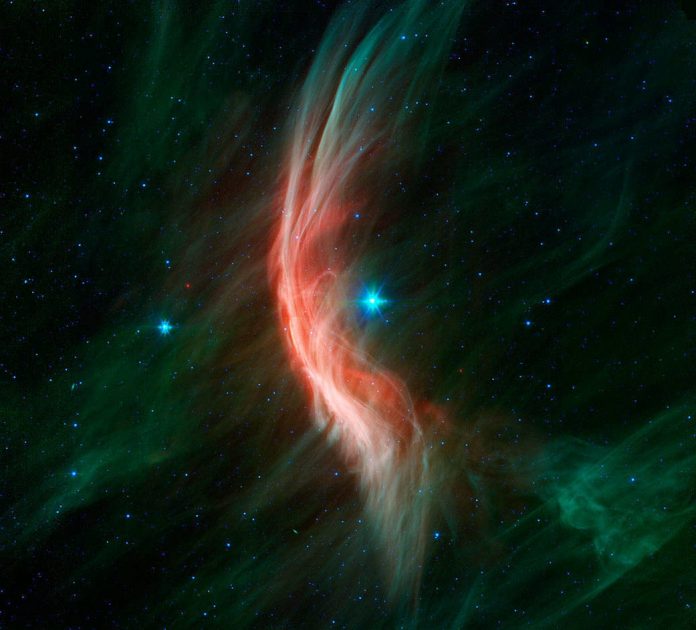 This week, NASA is saying goodbye to one of its most storied and productive telescopes: The Spitzer Space Telescope, launched in 2003 to investigate our universe in the infrared wavelength. As this remarkable 16-year mission draws to a close, we look back over the achievements of this groundbreaking instrument and how its legacy will continue to inform astronomy and space exploration for years to come.

Using infrared to peer into the black depths of space

This Spitzer image shows the giant star Zeta Ophiuchi and the bow shock, or shock wave, in front of it. Visible only in infrared light, the bow shock is created by winds that flow from the star, making ripples in the surrounding dust. NASA/JPL-Caltech

Unlike other telescopes such as Hubble or Chandra which image in the visible light and X-Ray wavelengths, respectively, Spitzer images in the infrared wavelength. Human eyes can’t see infrared radiation, but we do feel it as heat, and by looking in this wavelength Spitzer is able to detect objects which are too cold to emit visible light, such as exoplanets and the coldness of the space between stars.

Using infrared, astronomers can see things which would otherwise be hidden. Dust clouds, for example, are common in space and look like dark, featureless blobs in the visible light spectrum. But in infrared, they glow with light as parts of the dust are illuminated by heat from the stars they shroud.

Scientists didn’t know how valuable infrared data would be until Spitzer started imaging parts of the universe using it. “Spitzer taught us how important infrared light is to understanding our universe, both in our own cosmic neighborhood and as far away as the most distant galaxies,” Paul Hertz, director of astrophysics at NASA Headquarters said in a statement. “The advances we make across many areas in astrophysics in the future will be because of Spitzer’s extraordinary legacy.”

Studying the cold, the old, and the dusty

The Cat’s Paw Nebula, imaged here by NASA’s Spitzer Space Telescope using the IRAC instrument, is a star-forming region inside the Milky Way Galaxy. The dark filament running through the middle of the nebula is a particularly dense region of gas and dust. NASA/JPL-Caltech

Spitzer used its infrared detection to peer back in time and far off into the universe as well as through dust clouds. Data from it has helped us discover that the earliest galaxies in the universe shone brightly and that the famous supermassive black hole in Messier 87 resides in a supermassive galaxy. It has revealed facts about the evolution of stars, showing cosmic bubbles around young stars, imaging stellar playgrounds, and capturing the life cycles of stars.

On a large scale, too, Spitzer revealed the fate of colliding galaxies and has helped to peel away the layers of one of astronomy’s most famous and beautiful objects, the Crab Nebula.

Within our solar system, Spitzer also analyzed the materials that went flying when NASA’s Deep Impact mission collided with a comet called Tempel 1 in 2005, and discovered that Saturn has an enormous but invisible ring around it which extends out with a diameter 300 times that of the planet.

“It’s quite amazing when you lay out everything that Spitzer has done in its lifetime, from detecting asteroids in our solar system no larger than a stretch limousine to learning about some of the most distant galaxies we know of,” said Michael Werner, Spitzer’s project scientist.

The center of our Milky Way galaxy is hidden from the prying eyes of optical telescopes by clouds of obscuring dust and gas. But in this stunning vista, the Spitzer Space Telescope’s infrared cameras penetrate much of the dust, revealing the stars of the crowded galactic center region. NASA, JPL-Caltech, Susan Stolovy (SSC/Caltech) et al.

An ingenious approach to exoplanet hunting

Some of Spitzer’s most famous findings weren’t even part of its original mission plan. When Spitzer was launched in 2003, exoplanet discovery was not a priority for space exploration programs. However, once the telescope was deployed, scientists discovered they could use it as a makeshift planet detector.

Spitzer was able to locate planets using the transit method, in which it observes stars and watches for a telltale dip in their light levels. If there are dips which occur at regular intervals, that suggests that something is passing between the star and the telescope — likely a planet.

This illustration depicts the seven Earth-size planets of TRAPPIST-1, showing the planets relative sizes but does not represent their orbits to scale. NASA / JPL

This technique was used in 2017 to discover the TRAPPIST-1 system, a set of seven Earth-sized exoplanets in orbit around a star 39 light-years away. In the following years, Spitzer discovered more exoplanets and was even able to detect molecules in the atmosphere of exoplanets by seeing how light from the planets split into different wavelengths — a technique called spectroscopy.

This illustration shows the possible surface of TRAPPIST-1f, one of the planets in the TRAPPIST-1 system. NASA/JPL-Caltech

Scientists hadn’t anticipated that Spitzer would be able to gather so much information about exoplanets, and its capabilities came as a most welcome surprise. “When Spitzer was being designed, scientists had not yet found a single transiting exoplanet, and by the time Spitzer launched, we still knew about only a handful,” Sean Carey, manager of the Spitzer Science Center at IPAC at Caltech in Pasadena, California, said.

“The fact that Spitzer became such a powerful exoplanet tool, when that wasn’t something the original planners could have possibly prepared for, is really profound. And we generated some results that absolutely knocked our socks off.”

This swirling landscape of stars is known as the North America Nebula. NASA/JPL-Caltech

Not only was Spitzer of importance in terms of its scientific discoveries — it also proved the feasibility of hardware approaches for future telescopes. The electronics and other equipment on board space telescopes and spacecraft generate heat, which generally needs to be dissipated by coolant to keep everything functioning. When it launched, Spitzer had a supply of helium to act as a coolant, keeping the temperature of its components down.

This helium coolant ran out in 2009 though, marking the end of its “cool mission,” so the telescope had to switch to passive cooling in a phase called the “warm mission.” This passive system requires no coolant, and dissipates heat through black paint on the side of the telescope facing away from the sun which radiates heat out, and shiny coating on the side facing the sun which reflects heat away.

In this artist’s rendering of NASA’s Spitzer Space Telescope in space, the background is shown in infrared light. NASA/JPL-Caltech

The scientists didn’t expect Spitzer to last that long once it switched to passive cooling. But in fact, it has been remarkably successful, carrying on its mission for  an amazing total of more than 16 years. This success has set the stage for future telescopes, proving how they can be long-lived even without coolant.

Few cosmic vistas excite the imagination like the Orion Nebula, an immense stellar nursery some 1,500 light-years away. This stunning false-color view spans about 40 light-years across the region, constructed using infrared data from the Spitzer Space Telescope. NASA/JPL-Caltech

Spitzer is now winding up its science operations. Its final operations will be on January 30, after which the telescope will be decommissioned.

We won’t be without an infrared telescope for long, however. The successor to Spitzer will be the James Webb Space Telescope. The James Webb has suffered from serious delays, but progress is being made as it goes through testing. The aim is to launch the telescope in March next year, when it can use its infrared detectors to analyze infrared data similar to the way Spitzer did.

After successfully assembling the entire observatory of NASA’s James Webb Space Telescope, technicians and engineers moved on to fully deploy and tension all five layers of its tennis court sized sunshield, which is designed to keep its optics and sensors in the shade and away from interference. NASA/Chris Gunn

Spitzer also inspired the cooling system of James Webb, which will cool components using a tennis-court-sized sunshield. The upcoming telescope will be able to see even farther into space, being around 1,000 times more powerful than Spitzer.

“We have a lot of new questions to ask about the universe because of Spitzer,” said Michael Werner, Spitzer project scientist based at NASA’s Jet Propulsion Laboratory in Pasadena, California. “It’s very gratifying to know there’s such a powerful set of capabilities coming along to follow up on what we’ve been able to start with Spitzer.”

The legacy of Spitzer

The retirement of Spitzer marks the end of a remarkable mission of scientific exploration and discovery. From identifying an entire system of Earth-like planets to peering deep into the dusty recesses of space, this telescope allowed us to see the universe in a whole new way. The project also leaves behind a massive archive of data which could be used by astronomers to make new discoveries for years to come.

“I’m hoping Spitzer will be remembered as a really amazing scientific gift,” said Sean Carey, the manager of the Spitzer Science Center. “It allowed us to transform our understanding of some very important aspects of astronomy. Spitzer has been integral to that.”