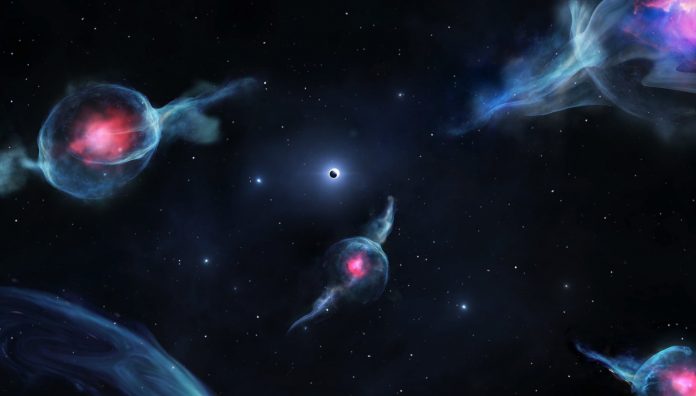 Astronomers have discovered a mysterious new class of objects at the heart of the Milky Way, unlike anything else found previously in our galaxy. The objects “look like gas but behave like stars,” according to senior researcher Andrea Ghez, as they start off small and compact but are stretched to a larger size when they approach the supermassive black hole in the center of the galaxy.

The researchers believe these objects could teach us about the evolution of stars and what happens to celestial bodies in environments of extreme gravity.

What are these strange objects?

Artist’s impression of G objects, with the reddish centers, orbiting the supermassive black hole at the center of our galaxy. The black hole is represented as a dark sphere inside a white ring (above the middle of the rendering). Jack Ciurlo

The puzzle began in 2005 when astronomers identified an object near the center of our galaxy called G1, which seemed to be orbiting around the supermassive black hole there in a strange way. In following years, five more objects numbered G2 to G6 were discovered. At first, these objects were thought to be clouds of gas. But one odd thing researchers noticed was that when the object G2 came very close to the event horizon of the black hole, it wasn’t torn apart in the way they would have expected. Instead, it initially stretched out, before rebounding back toward its original state.

“At the time of closest approach, G2 had a really strange signature,” Andrea Ghez, Professor of Astrophysics and director of the UCLA Galactic Center Group, said in a statement. “We had seen it before, but it didn’t look too peculiar until it got close to the black hole and became elongated, and much of its gas was torn apart. It went from being a pretty innocuous object when it was far from the black hole to one that was really stretched out and distorted at its closest approach and lost its outer shell, and now it’s getting more compact again.”

Now, new analysis of data on the six G objects makes astronomers think that they were formed when binary stars collided. Binary stars are twin star systems, in which two stars are locked in a mutual orbit. But sometimes, these stars can smash together and merge, producing a huge cloud of dust and gas surrounding the now singular merged star. These mergers are thought to be rare, but as the gravitational forces in this particular region of space are so extreme, it could be causing these mergers to happen more regularly than elsewhere in the galaxy.

The dramatic region at the heart of the Milky Way

Artist’s impression of the supermassive black hole at the heart of the spiral galaxy NGC 3147, located 130 million light-years away. ESA/Hubble, M. Kornmesser

Right in the center of our galaxy is a behemoth of a black hole called Sagittarius A* (pronounced A-star). Even though it is 2.6 million times the mass of our Sun, it is only around 120 Astronomical Units across (an Astronomical Unit is the distance between the Earth and the sun). That means that a tremendous amount of mass is squeezed into a relatively small space, and the black hole exerts a very strong gravitational pull.

This type of black hole is called a supermassive black hole, and astronomers believe that almost all galaxies have such black holes at their centers (though there are exceptions). We are just beginning to learn about the secret lives of these monster black holes, with surprising findings like the fact that planets may be able to form around them as well as the recent discovery of the G objects.

One of the challenging but also exciting features of investigating the heart of the Milky Way is that it is an extreme environment where density and gravitational forces are much stronger than they are in our solar system. “The Earth is in the suburbs compared to the center of the galaxy, which is some 26,000 light-years away,” Ghez explained in the statement. “The center of our galaxy has a density of stars 1 billion times higher than our part of the galaxy. The gravitational pull is so much stronger. The magnetic fields are more extreme. The center of the galaxy is where extreme astrophysics occurs — the X-sports of astrophysics.”

Ghez’s team is the same one that discovered last year that the supermassive black hole at the heart of the Milky Way is getting hungrier. The team theorized that blobs of gas could have been sucked off a nearby star and fallen into the black hole, producing a change in brightness as the gas glows when falling into the event horizon.

How the G objects were identified

Orbits of the G objects at the center of our galaxy, with the supermassive black hole indicated with a white cross. Stars, gas and dust are in the background. Anna Ciurlo, Tuan Do/UCLA Galactic Center Group

To identify the G objects, the researchers looked at data about the center of the Milky Way gathered at the W.M. Keck Observatory and used a technique called adaptive optics. Adaptive optics enables more accurate imaging by limiting the distorting effects of Earth’s atmosphere in real time, allowing astronomers to peer deeper into the heart of our galaxy.

They had to distinguish the G objects from other clusters of nearby stars, so they used a tool called the OSIRIS-Volume Display which can identify objects’ spectra so they could track the movements of the G objects in isolation.

As the data used to investigate the objects spans more than two decades, the scientists have a good level of confidence that what they are observing is a real phenomenon and more than just a single strange aberration. “The unique dataset that Professor Ghez’s group has gathered during more than 20 years is what allowed us to make this discovery,” Anna Ciurlo, a UCLA postdoctoral researcher and lead author of the paper describing the findings, said in the statement. “We now have a population of G objects, so it is not a matter of explaining a one-time event like G2.”

What these mysterious objects teach us about star evolution

If these G objects are indeed formed by the merging of binary stars, this has implications for the way we think about mergers occurring under extreme gravitational forces. “Mergers of stars may be happening in the universe more often than we thought, and likely are quite common,” Ghez said.

“Black holes may be driving binary stars to merge. It’s possible that many of the stars we’ve been watching and not understanding may be the end product of mergers that are calm now. We are learning how galaxies and black holes evolve. The way binary stars interact with each other and with the black hole is very different from how single stars interact with other single stars and with the black hole.”

The confirmation of the existence of these objects also means we can look forward to some dramatic events when they approach close to the black hole. “One of the things that has gotten everyone excited about the G objects is that the stuff that gets pulled off of them by tidal forces as they sweep by the central black hole must inevitably fall into the black hole,” co-author Mark Morris, UCLA professor of physics and astronomy, said in the same statement. “When that happens, it might be able to produce an impressive fireworks show since the material eaten by the black hole will heat up and emit copious radiation before it disappears across the event horizon.”

The findings are published in the journal Nature.

Fortnite Chapter 2 – Season 2 is officially here, check out the Trailer