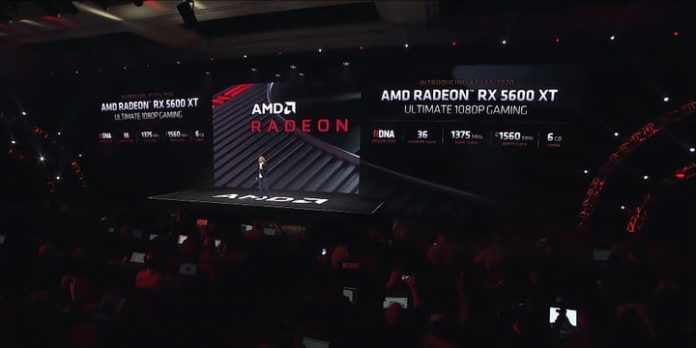 AMD’s mid-range division of its Navi graphics card line has some new reinforcements. Following the debut of the entry-level RX 5500 XT in December 2019, AMD has now unveiled its RX 5600 XT, which the company is heralding as the ultimate 1080p gaming card. Although a welcome addition to the lineup, this debut was far from surprising, as multiple leaks over the preceding weeks told us almost everything to expect from the new card.

Although we don’t have third-party benchmarks to give us a true idea of what this new card is capable of, by the numbers at least the 5600 XT slots neatly into the existing lineup of 5000-series GPUs — just between the 5700 and 5500 XT. Although its core and clocks are very near that of the 5700 (especially if you factor in overclocking from third-party manufacturers and gamers) the memory configuration is distinctly different.

With just 6GB of GDDR6 (2GB less than the 5500 XT) at 12Gbps and a 192-bit memory bus, the 5600 XT has 288GBps of memory bandwidth, 35% less than the 5700. That’s where AMD has looked to curtail its performance to make it a more middle-road GPU, though it could mean that memory overclocking yields the most impressive results with this new midrange graphics card.

AMD compared the RX5600 XT against Nvidia’s GTX 1660 Ti, and the Radeon performed with at least 10 frames per second better than its rival on titles such as Call of Duty: Modern Warfare, The Division 2, and Gears of War 5. According to AMD’s own benchmarks with these AAA game titles, the Radeon RX 5600 XT edges ahead of its rival by at least 10%. The Radeon graphics card also leads its rival in eSports gaming as well, beating the GTX in titles such as Fortnite.

The AMD RX 5600 XT won’t have a reference model, so although AMD prices it at $279, it may be slightly more expensive for most add-in board partner models. A wide array of models from manufacturers like MSI, ASRock, Gigabyte, Asus, and Powercolor, among others, will debut worldwide starting on January 21.

Additionally, AMD announced that its desktop-class RX5700 and 5600 graphics line will also be coming to mobile, with the 5600m and 5700m for laptops arriving in the first half of 2020.

This wasn’t the only AMD GPU we heard about during its press conference though. There was also a hint of the long-awaited “Nvidia Killer,” otherwise known as “Big Navi.” That should use the Navi 21 GPU, which by all reports is absolutely massive. AMD claims its performance will equal or exceed the Nvidia RTX 2080 Ti, which is an exciting prospect.

But as usual, Nvidia is waiting in the wings to pull the rug out from under AMD’s GPU announcements. Keep an eye on Digital Trends’ dedicated CES page for all the latest news from this year’s biggest tech show (so far).

Microsoft’s is bringing ChatGPT to your browser, and you can test it out right now

Among Us VR is getting a giant new map soon