HomeNewsAmazfit’s T-Rex smartwatch is so tough, it would take dino-mite to break...
News

Amazfit’s T-Rex smartwatch is so tough, it would take dino-mite to break it 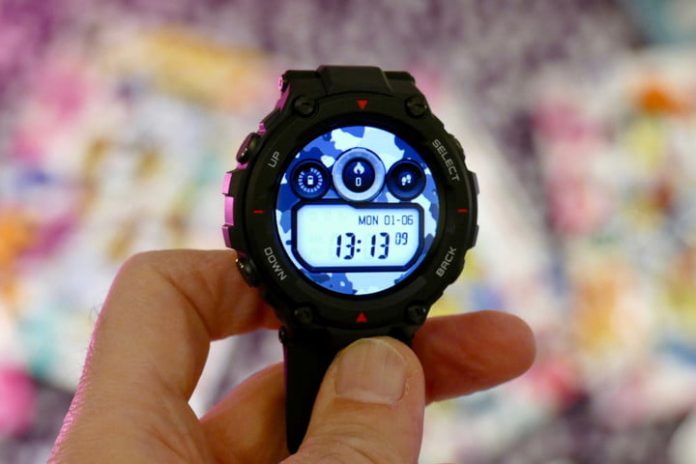 The Amazfit T-Rex smartwatch is built to take on the toughest challenges, which may (or may not) include surviving dinosaur attacks, should one take you by surprise. Either way, this is one durable watch, and Huami — the company behind the brand — has been taking notes on design from one company that knows how to build a strong watch: Casio. Amazfit has already proven it doesn’t have a problem aping popular designs with the Apple Watch lookalike Amazfit GTS, and with the T-Rex, has clearly drawn inspiration from popular G-Shock models like the GA-110 and GA-700.

The thing is, can it compete with not only Casio’s superb range of ultra-tough watches, but also other tough smartwatches? We’ve grappled with the T-Rex for a short time to find out.

The T-Rex’s body is so tough it has earned a MIL-STD-810G grade approval, meaning it’ll function even after being in the rain, under extreme heat, extreme cold, and being subjected to salt, dampness, and abrasive substances too. The watch is water-resistant to 50 meters, and can be used when swimming. The bezel has a raised bumper to protect the 1.3-inch AMOLED screen, which is also covered in Gorilla Glass 3 and an anti-fingerprint coating.

This is a big watch. The case measures 47mm, and the tough exterior is emphasized by fake screw heads, textured buttons, and chunky guard pieces surrounding the screen too. The 22mm strap is flexible silicone and very stretchy. While the strap is comfortable, the body itself is flat underneath, and due to the watch’s size it remains noticeable on your wrist during the day, never really disappearing, as a well-fitting watch should.

Although the attractive screen is bright and has a high resolution at 360 x 360, the rest of the watch looks quite cheap. It has the air of a G-Shock knockoff, right down to the similarly styled watch dial faces, and that’s not a good thing at all. However, in one of the alternative camouflage color schemes, the T-Rex does win back some much-needed personality. The standard black version is too generic. At 58 grams, the T-Rex isn’t heavy, despite the rugged looks.

Amazfit uses its own software for the T-Rex, just as it does on its other smartwatches. The platform is not quite as comprehensive as Google’s WearOS, but does hold its own against software like Huawei’s found on the Watch GT2 and the Honor MagicWatch 2. It delivers notifications, has an extensive and simple to use workout system, and a clearly laid out settings screen. It doesn’t run apps, and doesn’t need to. Like Huawei’s in-house software, its simplicity ensures a long battery life. Huami promises up to about 40 days, but it’s likely to be much less than this when using the built-in GPS.

It’s quite smooth and speedy too — perhaps more so than the software on the Amazfit GTS, although it’s still built around a series of menus that involve a lot of swiping and scrolling. The one advantage the T-Rex has over other Amazfit watches is the G-Shock style buttons. These are clearly marked — up, down, select, and back — and do help with navigation. They’re easy to press too. Open the workout app, using the Select button, and you get the choice of 14 different workout plans, ranging from walking, running, and cycling to swimming and skiing.

The watch has GPS inside, and a heart rate sensor on the back, which also provides alerts on heart rate abnormalities. Fitness and health data is collated in Amazfit’s accompanying app, where you can also choose to sync different watch faces. These take a while to be applied on the watch, so it can be a long process choosing the right one for you. Overall, the software experience is good, but the menus, font choice, and color schemes cannot be considered premium.

Amazfit’s premium GTS feels like a million dollars compared to the T-Rex, which gives the impression it’s much cheaper than the actual $140 cost. To be clear, the quality of materials and build aren’t cheap, it’s the derivative design and lack of finesse in fit and comfort that let the T-Rex down. It really is a bit of a dinosaur, actually, as it’s the type of smartwatch we got used to seeing when smartwatches were very new a few years ago.

It’s going to need every bit of that T-Rex ferociousness to survive, as the competition is very strong. It’s tricera-topped (sorry) by various smartwatches from TicWatch, starting with the TicWatch S2. This durable model can be purchased for just a little more at around $150, and comes with Google’s WearOS, giving access to third-party apps and Google Fit. It’s no better looking than the T-Rex, but it may be more tempting to those invested in Google’s ecosystem.

Similarly, the $200 TicWatch Pro uses an innovative dual-screen system to improve battery life, and shares the S2’s tough body too. The Honor MagicWatch 2 is also well priced, and while it’s not overly durable, it does have great fitness and activity support, plus a considerably more attractive design.

The T-Rex’s durability may prove tempting if you want an inexpensive smartwatch that will resist some hard treatment, but the uncomfortable fit is disappointing, and the design looks cheap and derivative. The software on the version we tested was not final, and although it seemed to work simply and without a problem, it’s impossible to comment on everyday reliability at this stage.

Amazfit will release the T-Rex in January for $130, and the company sells its products through Amazon.