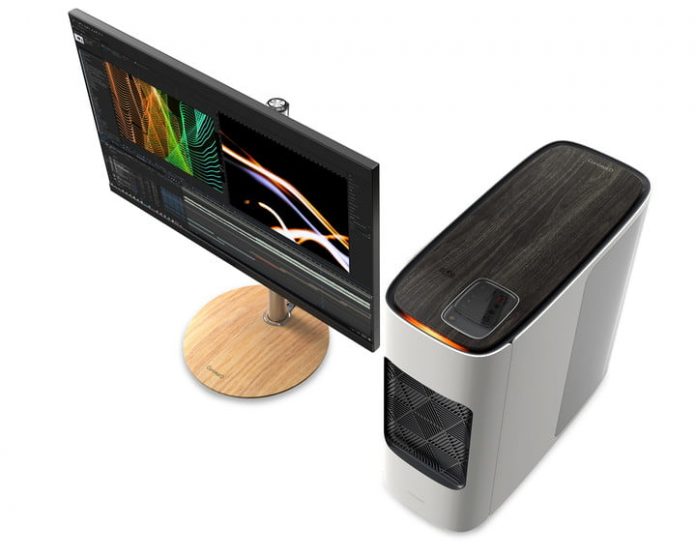 Hearing the word “workstation” evokes visions of bulky, big, black boxes. Acer wants to change that with its new ConceptD 700 workstation at CES 2020.

It’s a striking design that shows how form and function can go hand-in-hand — even for workstations. This desktop showcases Scandinavian-inspired design alongside durable silicon to help animators, filmmakers, and designers in their creative workflows.

Complementing the airy, white aesthetics of this workstation is a woodgrain-inspired top side, though Acer did not specify if the top plate is constructed from real wood. The dark wood pattern is not unlike what HP had used on its premium Envy Curved 34 consumer all-in-one desktop.

There are cutouts on the wood-like top panel to accommodate easy-access ports, and a built-in wireless charging plate means that you can recharge your phone without relying on cables as you’re working on your projects.

The ConceptD 700 also comes with plenty of power packed inside, and this desktop workstation can be configured with an Intel Xeon E processor, up to Nvidia Quadro RTX 5000 graphics, up to 64GB DDR4 memory, on-board PCIe M.2 solid-state storage, and up to four internal storage bays for expandability.

To keep things running smoothly, Acer claimed that it had optimized thermal ventilation with three cooling dans to cycle air through the system in a triangular pattern.

There’s built-in cable management too, and like the recently reviewed Acer Predator Orion 3000, comes with a flip-out headset cradle to store your headphones.

Given its workstation classification, Acer stated that this desktop has been tested and certified by major independent software vendors (ISVs), ensuring that it will run some of the industry’s most popular and demanding software titles.

The ConceptD 700 will be available starting in March in Europe, the Middle East, and Asia with a starting price of €1699, which translates to around $1,900. Acer did not mention North American pricing or availability, so it remains unclear if this powerful RTX Studio workstation will be hitting US shores any time soon.