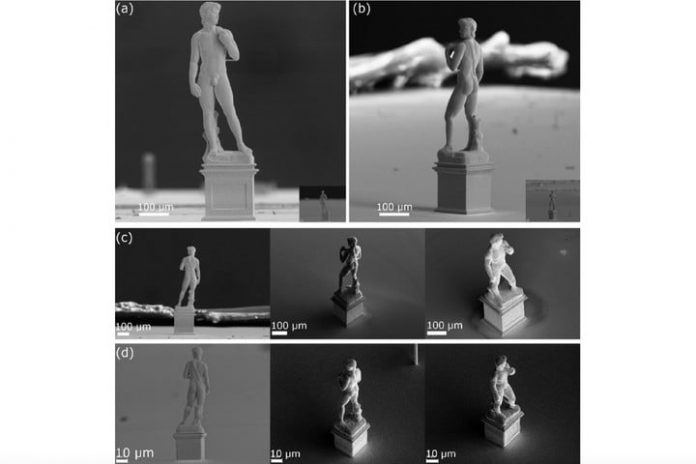 Towering in at a colossal 17-feet tall, Michelangelo’s David statue is a spectacular work of art. Well, it turns out that it’s no less impressive when it’s under one millimeter in size — as experts from 3D-printing company Exaddon and the Laboratory of Biosensors and Bioelectronics at ETH in Zürich, Switzerland recently made clear.

In a dazzling demonstration, the collaborators teamed up to re-create the iconic David statue at two different (although both exceptionally tiny) scales. One was scaled down to 1:10,000, while the other was miniaturized even further to a scale of only 1:70,000. To put that pair of figures in context, the first one is around the same size as a poppy seed, just under 1 millimeter. The second one is around a tenth of a millimeter. Both are recognizable as the David statue, although the smaller of the two loses quite a few of the details of its much larger sibling. At that size, it’s hard to blame it too much, though!

Both 3D models were printed in metal using a special “state-of-the-art … confined electrodeposition 3D printing” method. This serves as a proof-of-concept for the work of startup Exaddon, which specializes in 3D-printed metal at a very small scale. On its website, Exaddon describes how its cutting-edge tech can be used to “additively micromanufacture metal objects or to repair minute metal structures at room temperature.” This can include tiny metal structures anywhere from a few micrometers in size up to several hundred micrometers. While producing miniature versions of masterpieces is one possible application, more likely ways will involve things like repairing microelectronics.

As impressive as this all is, however, it’s not the only stunningly small miniature Digital Trends has covered as of late. Last year, we wrote about Starship Odyssey, a Guinness World Record-winning short film officially recognized for having the smallest 3D stop-motion animation character in history. Its lead character is just 300 microns tall. That’s approximately the size of a single grain of dust.

A paper describing the Michelangelo’s David work (among other demos) was recently published in the journal Micromachines. It is titled “Additive Manufacturing of Sub-Micron to Sub-mm Metal Structures with Hollow AFM Cantilevers.”

Facebook
Twitter
Pinterest
WhatsApp
Previous articleBrain-reading headphones are here to give you telekinetic control of your tech
Next articleGoogle’s A.I. can now detect breast cancer more accurately than doctors can