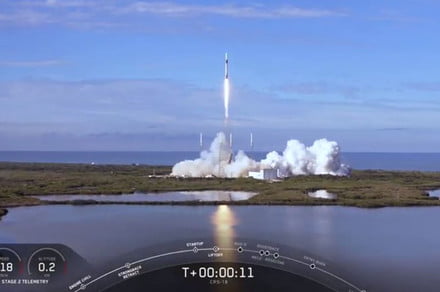 SpaceX  on Wednesday will launch the CRS-19 Commercial Resupply Service mission into orbit using its Falcon 9 booster rocket, and you can watch the event via a NASA TV livestream in the player above.

The rocket will take off at approximately 9:51 a.m. PT from the Cape Canaveral Air Force Station’s Space Launch Complex 40 in Florida. You can watch the launch for free in the player above starting about 20 minutes before the launch, or roughly 9:30 a.m. PT.

For this mission, the SpaceX rocket will be bringing up “supplies and payloads, including critical materials to directly support dozens of the more than 250 science investigations and technology demonstrations that will occur during Expeditions 61 and 62,” according to a press release from NASA about Wednesday’s launch.

The Dragon spacecraft is scheduled to reach the ISS on Saturday, December 7, and remain there until January 4.

SpaceX’s Falcon 9 booster also launched the Crew Dragon capsule into orbit on July 25. During that mission, the Dragon capsule carried 5,500 pounds worth of equipment for experiments and ongoing scientific research to supply the ISS.

While it’s brought loads of equipment up to the ISS, the goal is still to carry a crew of astronauts to the ISS for the Demo-2 mission with NASA, which SpaceX CEO Elon Musk has said he hopes will happen in 2020 if all goes as planned.

The Dragon is one of many of SpaceX’s spacecrafts that the company is working on launching into space. Aside from the Dragon, there’s also the Starhopper, which is the prototype rocket for the company’s Starship. SpaceX hopes to eventually use Starship as a commercial spacecraft that would be able to take off and land again, like an airplane.