Home News This ancient, dusty galaxy gives clues to the earliest evolution of the...
News 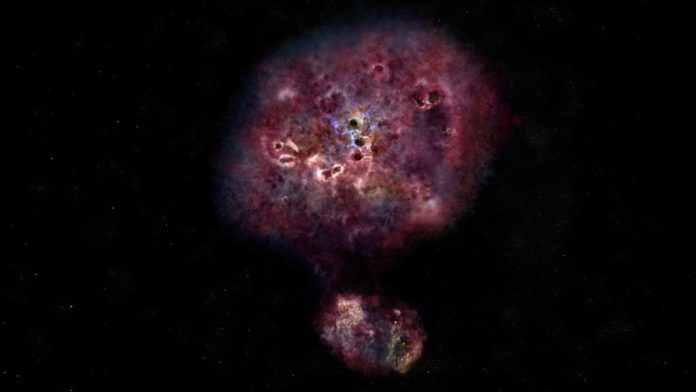 Artist’s impression of what MAMBO-9 would look like in visible light. The galaxy is very dusty and it has yet to build most of its stars. NRAO/AUI/NSF, B. Saxton

Astronomers have observed an ancient, dusty galaxy that forms stars at a tremendous rate. The galaxy is named MAMBO-9, and the light it generates traveled for around 13 billion years to reach Earth. The universe is only 13.8 billion years old, so MAMBO-9 is one of the oldest dusty galaxies yet observed.

MAMBO-9 is categorized as a dusty galaxy because it contains massive amounts of dust and gas, making it the perfect nursery for the formation of new stars. Such galaxies form stars at a rate of up to the equivalent of several thousand times the mass of our sun per year. For reference, in our galaxy stars are formed at a rate of around three solar masses per year. Another reason that MAMBO-9 is noteworthy is that astronomers previously thought that massive galaxies wouldn’t have formed in the early universe, but being both very old and very massive, this galaxy disproves that.

Locating ancient dusty galaxies is extremely challenging because the dust obscures the light from the stars which makes them hard to spot. “These galaxies tend to hide in plain sight,” lead author Caitlin Casey of the University of Texas at Austin explained in a statement. “We know they are out there, but they are not easy to find because their starlight is hidden in clouds of dust.”

To pinpoint this galaxy, Casey and her team used the Atacama Large Millimeter/submillimeter Array (ALMA) to detect the very faint starlight being given off. Thanks to ALMA’s sensitivity, Casey and her team have now been able to determine the distance of MAMBO-9. “We found the galaxy in a new ALMA survey specifically designed to identify dusty star-forming galaxies in the early universe,” said Casey. “And what is special about this observation, is that this is the most distant dusty galaxy we have ever seen in an unobstructed way.”

The astronomers were able to determine that the galaxy is not only massive, with ten times more mass from dust and gas than all the stars in the Milky Way, but it is still continuing to form stars. The amount of dust is surprising as we normally observe more stars than dust because dust is produced by dying stars. But in this case, there is much more dust than stars. Astronomers are still figuring out how so much dust could have been formed so soon after the Big Bang.