The Huawei P40 may not have a next-generation graphene battery 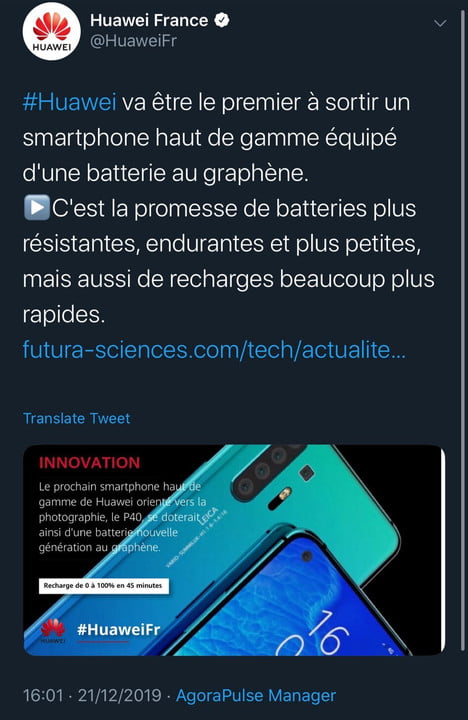 The official Huawei France Twitter account caused quite the stir recently when it posted a tweet claiming the rumored Huawei P40 would be the first smartphone equipped with a graphene battery. Unfortunately, it seems the tweet was incorrect, and the tweet was pulled moments after posting — but not before Phone Arena was able to grab screenshots of the tweet.

The next generation of battery technology, a graphene battery would allow for larger capacities in a smaller space than regular lithium-ion cells, and would be able to recharge incredibly quickly. For instance, Huawei France’s tweet claimed the P40’s 5,000mAh battery could be fully charged in just 45 minutes. As such, it’s understandable why this technology is sought after by many phone manufacturers, and prior whispers said Huawei was working on it for the P40.

Sadly, the reaction against the tweet has been swift and brutal. Renowned leaker Ice Universe was one of the first to denounce Huawei France’s tweet, delivering a swift couplet of tweets where they said the tweet could be “confirmed to be false,” and claimed the technology to create a graphene battery in a phone was “currently impossible.”

While the words of one (admittedly accomplished) leaker aren’t law, there are other elements to the story that mean it’s best to approach it with a healthy dose of skepticism. For instance, it’s odd for an official account to discuss an unannounced device. While that may explain the tweet’s swift deletion, it’s also worth pointing out the image used was a fan-made render, and not official Huawei marketing.

But whether the Huawei P40 packs a graphene battery or not, it’s probably going to be an impressive device regardless. The last rumors we heard about Huawei’s new flagship device revealed a familiar-looking camera module, but one that’s likely to pack impressive specs, considering Huawei’s past phones. However, it’s not all good news. At the same time the last renders were released, it was confirmed that while the P40 range would run Android 10, it wouldn’t launch with Google’s core apps like Google Drive and the Google Play Store. As a result of the ongoing trade war between the U.S. and China, Huawei has been left high and dry where Google’s services are concerned, and that could impact the device’s viability outside of China.