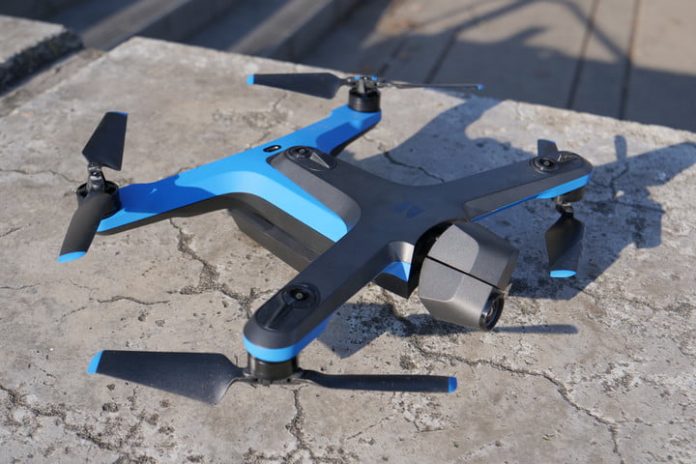 “Auto-follow drones have been around for years, but Skydio 2 is the first one worth buying.”

According to its creators, Skydio 2 ($999) is the most advanced auto-follow drone on the face of the planet. Thanks to an array of six 4K cameras and some proprietary software developed by a group of MIT grads, this drone is capable of flying, filming, dodging obstacles, and planning out cinematic flight paths, all without any input from the user.

This is the second generation of the drone, and in this new and improved version, Skydio has tried to iron out the kinks that plagued the original. So, when I got my hands on a review unit, I did the only thing I could think of to test an auto-follow drone of this caliber.

I hopped on a mountain bike, headed to the nearest thicket of trees, and tried my best to lose it.

The first place I set Skydio 2 loose was an open parking lot with nothing more than a few lamp posts sparsely peppered throughout. I did this out of caution. After trying a half dozen other auto-follow drones over the years, I’ve developed a healthy skepticism of their abilities. Even with a reputation like Skydio’s, I wanted to do the maiden flight in a place that was mostly free of obstructions.

To my delight, the drone handled itself gracefully in this open environment, save for a slightly nerve-wracking point between takeoff and orientation when it flew toward the trees near the perimeter of the lot and appeared to be on a collision course with a large Douglas fir.

Thankfully, Skydio’s software did its job, and it came to a gentle stop just before the trunk, nestling in to find an ideal filming angle. Once my heart rate slowed, I locked the drone on me and darted around the parking lot on foot for a few seconds, an act the drone had zero trouble following. It stuck on me like white on rice, maintaining a consistent distance at all times, and automatically adjusting its camera angle when necessary.

That was just kicking the tires. Test number two was tougher. Me and a handful of friends hopped on our bikes and started an ascent up a decommissioned road (on our way to the gnarly, tree-filled trails we had planned for later). Branches hung down from the surrounding trees and bushes, and there was only a narrow corridor in which the drone could safely follow.

Again, Skydio 2 handled this environment with ease. It stayed on my tail like a shadow, and even when I tried to bamboozle it by abruptly turning around and racing downhill, the drone not only kept up, but kept me in frame the whole time.

At this point I was impressed, but the hardest test lay ahead. What I had come for was a series of trails that snake through a densely-packed forest. The plan was to blast down them on mountain bike as fast as possible and see if Skydio 2 could keep up.

In my mind, this is the ultimate test for an auto-follow drone. If it can navigate through tight trees at high speeds, then it can handle anything. I rode into the thickest part of the forest, fired up the drone, and sped off down the dirt.

This was where the drone’s limitations started to show. It followed for a few seconds and successfully negotiated a tricky route through the trees, but due to the combination of high speed and frequent obstacles, it started to lag behind. I left it in the dust within a few seconds, and had to backtrack so it could re-establish a visual lock on me.

This made for slow going down the trail. Initially, I couldn’t get more than a couple dozen meters ahead without having to pause and wait for it to catch up. I was hoping it would succeed here, but it ended up being more of a burden than a convenience. However, despite the lackluster chase footage, this extreme trial did highlight what the Skydio 2 has going for it.

First, and best – the Skydio 2 never crashed. It didn’t even come close. No matter how dense the foliage, no matter how many branches stood in its way, it always did what was necessary to avoid a collision. This is a huge confidence booster, and puts your mind at ease during filming sessions.

By the end of the day, I had full confidence in Skydio’s autopilot. I can’t understate how comforting it is to know your $1,000 flying camera isn’t going to destroy itself, no matter how sketchy the environment.

Second, the subject tracking software is top-notch. Not only does Skydio 2 have the ability to track multiple subjects, it also remembers the visual signature of those subjects and can re-establish a lock when someone leaves and re-enters the frame.

This came in handy. At one point, I was riding behind the drone so I could observe as it followed my friend down the trail. It then came to a stop – presumably because he rode too far ahead – but when I rode underneath it and came into it’s field of view, the software instantly remembered me, locked on, and resumed following.

We used this leapfrog method for the rest of our ride through the forest, which allowed us to capture some long, unbroken riding sequences even when the drone was having trouble keeping up.

I also loved the new Skydio Beacon. It’s a GPS beacon/remote you can use in lieu of your smartphone for controls. Lose the drone? Just press the homing button and it’ll fly toward your GPS signal until it re-establishes a visual lock.

Need to reposition it? Just point, click, and drag the drone through the air to where you want it to be. Want to change your filming angle? Press any arrow on the directional pad. The Beacon puts the drone’s most essential functions right at your fingertips instead of hiding them away in a smartphone app.

The app certainly isn’t anything to scoff at, though. It’s refreshingly minimalist, and mirrors the simplified, mostly-hands-0ff nature of the flying experience. There’s a grand total of three buttons on the main interface, and a hamburger menu in the top left where you can find all the other options. That’s it. In other drones, this level of minimalism might be an issue, but it doesn’t feel restrictive with the Skydio 2. Perhaps because algorithms and sensors are handling many aspects of the drone’s flight.

Overall, I’m impressed with this little quad. It’s unquestionably the best auto-follow drone you can buy right now, and it makes predecessors like Airdog and Hexo+ look primitive in comparison. Even the auto-follow features on DJI’s Mavic 2 Pro (which also has omnidirectional obstacle avoidance) can’t compare.

While advanced autopilot is the main selling point of this drone, it’s an absolute riot to fly manually. The controls are tight and responsive, and the drone feels very sporty and athletic in the air. I dare say it’s on par with DJI’s Mavic line — but that’s not even the best part.

When you fly Skydio 2 in manual mode, you’re in control of where the drone goes in a broad sense, but Skydio’s obstacle avoidance system is still at work in the background and will help steer you around any obstructions you encounter.

Unlike collision avoidance systems on other drones I’ve tested, which tend to stop the drone in its tracks when you get too close to something, Skydio’s software will automatically adjust your flight path and let you fly in your desired direction, totally uninterrupted. This means you can fly with reckless abandon and execute maneuvers you’d normally never attempt. It’s like bowling with bumpers, or using aim assist in a first-person shooter.

Ultimately, that makes the drone more fun. It gives you confidence as a pilot. Whether you’re flying manually or in full autopilot, Skydio’s AI-enhanced flight controls let you fly harder, faster, and with less effort.

Skydio 2 is easily the best auto-follow drone I’ve ever tested — and I’ve flown a lot of them over the past few years. In fact, it’s the only non-DJI drone I’d recommend buying right now, especially if your main goal is to film yourself or others doing action sports like snowboarding, skiing, mountain biking, or even wakeboarding.

The Skydio 2 is currently available for pre-order with a $100 refundable deposit, which goes towards its $999 retail price. It’s set to ship in “early 2020.”

In the realm of auto-follow drones, there is no better alternative to Skydio 2. This is the cream of the crop. It’s like having a flying GoPro on an invisible leash. The only reason you shouldn’t get one is if auto-follow functionality isn’t your main concern.

If you’re more interested in manual flight, you can get more bang for your buck with something like DJI’s Mavic Air or Mavic Pro, which are better suited for general purpose aerial videography, and are a bit more compact.

Drones are more at risk of accidental destruction than most gadgets, so the Skydio 2’s avoidance technology is a serious advantage. Otherwise, the drone feels sturdy enough to handle at least several years of use.

There's another option for stylus fans beyond what Samsung and Motorola are offering.When I got the opportunity to review the
Read more
News

August makes the highest-rated smart locks around, and for a good reason. August's locks are not only easier to install
Read more