Samsung’s Star Wars edition Galaxy Note 10 Plus is no longer far, far away 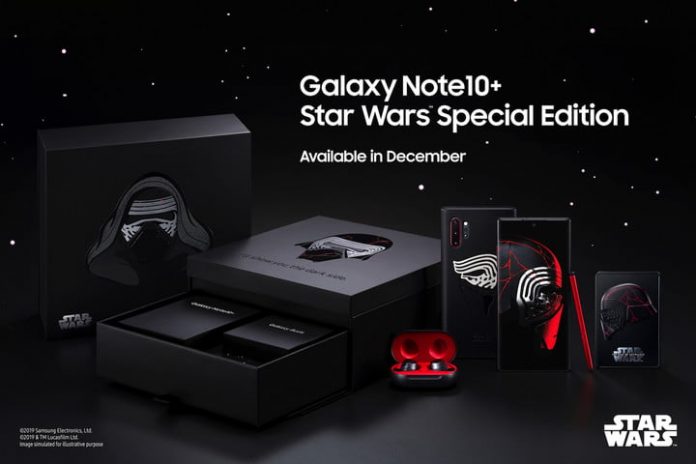 Samsung’s exciting new Star Wars-themed Galaxy Note 10 Plus smartphone is no longer far, far away. It’s here right now, and you can pre-order it through Samsung’s online store, plus it’s out a little earlier than previously expected. If you’re a Star Wars fan who hasn’t picked up a new smartphone in 2019, this is a great deal, as it indulges any geeky Star Wars collector’s mentality, and anyone’s love for a great mobile device.

A step above some of the lazier brand tie-ins we’ve seen, this one takes its Star Wars credentials seriously. The Galaxy Note 10 Plus embraces the Dark Side, so it comes in black with red accents around the camera lenses on the back and some custom artwork on the body, while the S Pen stylus is Lightsaber-themed in bright red with a black tip. A black leather case is included in the box and has an embossed design of the Supreme Leader’s helmet on it.

Even better is the inclusion of Samsung’s excellent Galaxy Buds true wireless headphones, this time in an exclusive black and red case. Finally, a Star Wars collector’s badge completes the special edition package, which is presented in a Kylo Ren-themed box. That’s the hardware side complete, but what about the software? There are several custom wallpapers, backgrounds, and sound packs, plus some great touches including some video start-up and shutdown effects, with a lightspeed jump effect when you switch the phone off looking especially cool.

The Galaxy Note 10 Plus itself is the 256GB model, which has a 6.8-inch Super AMOLED screen, a Snapdragon 855 processor in the U.S. or an Exynos 9825 processor in Europe and Asia, plus 12GB of RAM, and an excellent triple-lens camera on the back. It’s one of the best looking and performing smartphones Samsung has ever made, and the Star Wars model is a just makes it even more tempting.

Samsung has opened pre-orders up for the phone today. It costs $1,295 through the Samsung online store in the U.S., and it will ship by December 17. That means it’ll be great for Christmas, right? The Star Wars Galaxy Note 10 Plus will also be sold internationally — including in the U.K. Hong Kong, South Korea, Australia, and many European countries, although at the time of writing it is not available for pre-order yet. Previously, Samsung said the phone would be up for pre-order on December 13, so look out for it outside the U.S. around that time.

If you want one of these great special edition phones, you shouldn’t wait around. Samsung’s not talking about specific numbers, only that it’ll be sold in limited quantities. The phone’s release coincides with the new Star Wars: The Rise of Skywalker movie, which will be out in theaters on December 19.

When you're buying a hard drive for your Synology NAS, you're looking for two things: solid day-to-day performance, and long-term
Read more
News