Home News Review: Darksiders Genesis is one of the biggest surprises of 2019
News

Review: Darksiders Genesis is one of the biggest surprises of 2019 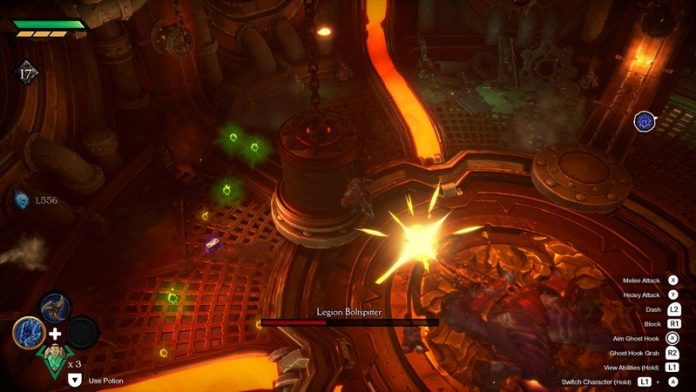 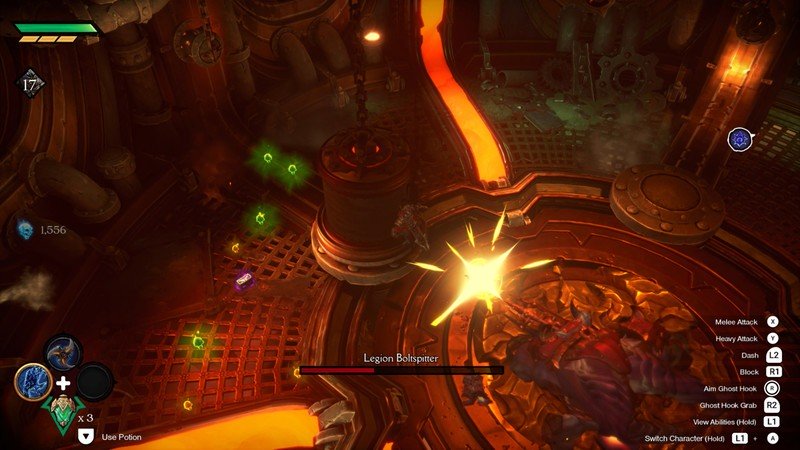 A Darksiders experience from a new perspective.

Darksiders Genesis is a top-down action game that takes you through a variety of levels. Unlike the interconnected nature of Diablo III, you teleport into various environments and are tasked with uncovering a number of secrets and defeating bosses. While the story is a little convoluted and hard to follow, the gameplay is sublime. The ability to freely move around the world and slay hordes of demons with two distinct characters feels incredible. 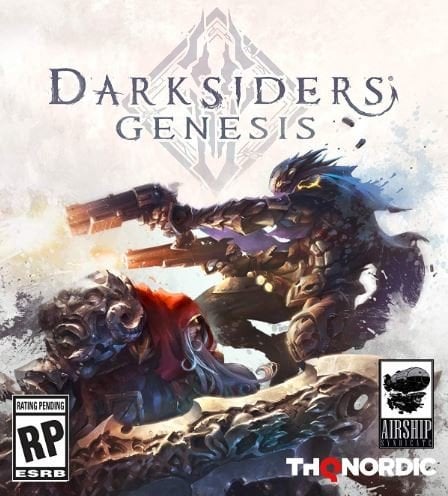 Darksiders Genesis may look like Diablo III, but it features a number of puzzles, the ability to jump, glide, ride a horse, and traverse the levels in a number of ways. This freedom of movement allows you to find hidden chests and other collectibles during its short, but memorable campaign.

From the get-go, you’re given control of two characters. War is the Horseman of the Apocalypse we’ve come to know, but Strife is a welcome addition. Strife’s carefree attitude and witty banter is the perfect foil to War’s serious demeanor. You should listen to the interactions because they’re hilarious. Luckily, both of them possess unique skills, too.

Strife relies on guns and long-range attacks to take out enemies. This comes in handy when you can’t get close to certain foes. There’s even a laser beam-like super ability thrown in there. War, on the other hand, comes with a giant sword and can take out certain creatures with ease through melee attacks. If you’re playing on your own, you can easily switch between both heroes so you’ll have to decide who’s better equipped for any given combat scenario. If you’re playing in co-op, you and your friend will control one character each. 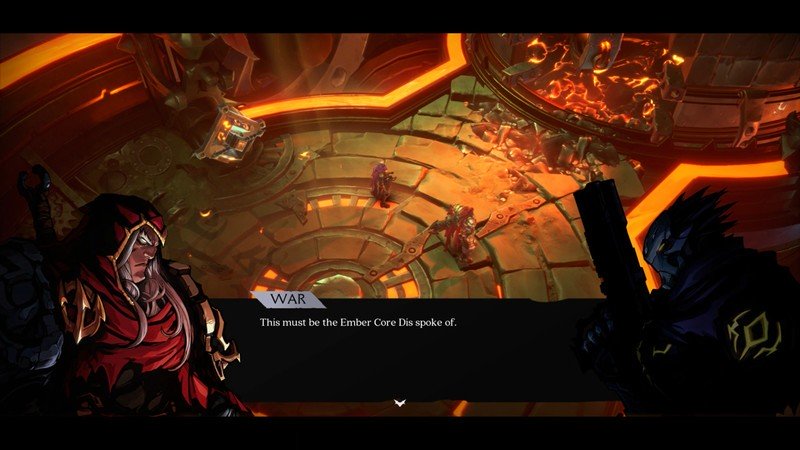 Darksiders Genesis features a lot of replayability because, as you gain new abilities, you’ll have to return to past areas and access new pathways. If you’re unsure what a magical plate does or can’t break a particular structure, come back after progressing further in the story. Usually, health upgrades or Trickster Keys are hidden in these unreachable locations. Both come in handy because the game gets progressively more difficult as the levels go by.

Upgrading your characters is the key to success in Darksiders Genesis. While the system may seem a little complex, adding cores to your skill tree makes you stronger because you acquire new skills. However, you can also purchase new moves and upgrades – from damage output to health upgrades – by visiting the hub world and talking to the various demon merchants like Vulgrim. Souls and Boatman’s Coins that you collect from each level are used as currency. 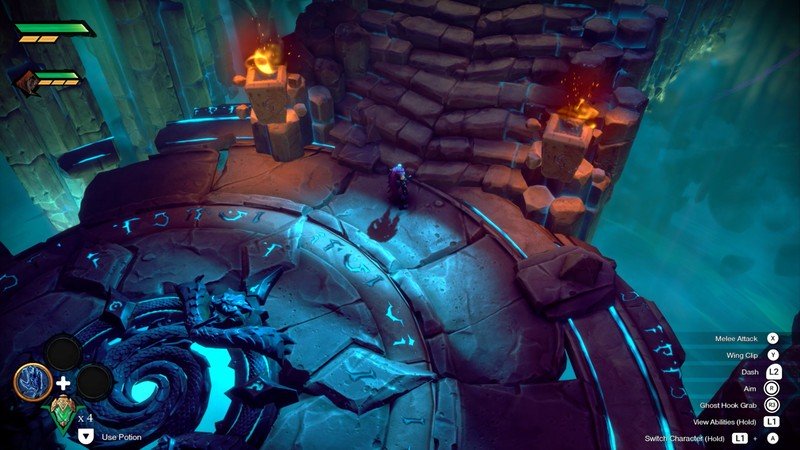 Unsurprisingly, Darksiders Genesis looks and plays the best on PC due to the variety of settings you can tweak. Unfortunately, it doesn’t appear to feature any enhancements on Google Stadia. The game appears to be running at 1080p resolution and 60 frames per second. The connection we played on was 330 Mbps and the Chromecast Ultra was connected to an ethernet cable. While the stream quality was broadcasting at 4K resolution, everything outside of the menus was a little blurry.

By no means does Darksiders Genesis look horrendous on Stadia – it’s quite a beautiful game – but I would’ve liked to see a higher resolution presentation like that found in Metro Exodus or Trials Rising. Since those games manage to render at 4K, it’s possible. Shockingly enough, additional input lag was barely noticeable, and I quickly adjusted to the difference. The real issue with Google’s platform at the moment is the image quality in my opinion. Games that should run at 4K run at 1080p due to poor optimization.

A great example of this problem is Final Fantasy XV which reaches 4K on Xbox One X, but only 1080p on Stadia. Stadia has an almost 5 teraflop advantage over Microsoft’s machine. Developers need to optimize their games for Google’s hardware. 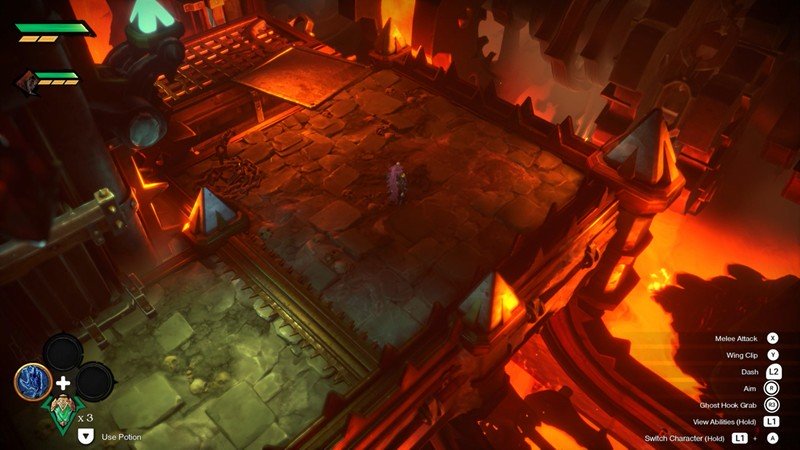 Overall, Darksiders Genesis is a great game, but it would’ve been even better with a better story and less confusing skill tree. The Darksiders Universe is complex and telling a mature tale would’ve served the title well. However, these are only minor grievances because the gameplay is incredibly responsive and performance is buttery smooth on PC and Stadia.

Darksiders Genesis won’t be available on Xbox One, Nintendo Switch, and PlayStation 4 until February 2020, so if you want to experience it, you should either play it on PC or Stadia. If you don’t have a gaming laptop or desktop, you should check it out on Stadia because it’s the first reason to subscribe to Google’s service in my opinion. It’s just that good.

Darksiders Genesis is a top-down spin-off from the main series that follows the Horseman Strife and his brother War. Team up with a friend and get ready for some co-op action.

The game was reviewed on Shadow and Stadia with codes provided by the publisher.

Google doesn't have to reinvent Android every year, but it does have to keep from screwing everything up.One of the
Read more
News

Getting a Galaxy S20? Here are some great headphones to pair it with

The Galaxy S20 includes exciting new additions like a 120Hz screen, but it misses out on one important feature: the
Read more

Google doesn't have to reinvent Android every year, but it does have to keep from screwing everything up.One of the
Read more

Getting a Galaxy S20? Here are some great headphones to pair it with

The Galaxy S20 includes exciting new additions like a 120Hz screen, but it misses out on one important feature: the
Read more

If you're looking to upgrade your home entertainment setup, today's the day with Woot's latest one-day sale on smart TVs
Read more