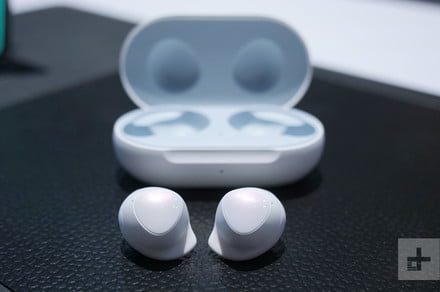 We now have the first small but noteworthy piece of evidence that Samsung is getting ready to release an upgraded version of its Galaxy Buds true wireless earbuds, which it launched early in 2019. Granted, it’s not much — just a single support page on its website entitled “SM-R175.” But that’s still meaningful because of the Galaxy Buds’ model number, which is SM-R170, as noted by BGR.com. So far, the prevailing belief is that Samsung will call these as-yet-unannounced earbuds the Galaxy Buds+, a naming convention that’s been used by countless companies already to indicate a model with more features than the original — but which won’t necessarily replace the original.

The true wireless earbuds space is undergoing massive change. What was once considered the state-of-the-art at the beginning of 2019, now seems outmoded, almost quaint. That’s the predicament facing Samsung. Its Galaxy Buds were very well received when they debuted earlier this year. For a while, they were one of our top-rated models. 10 months later, it’s a very different story.

During that time, we’ve seen the launch of a slew of supercharged competitors. Everything from the revamped Apple AirPods, to the remarkably affordable Amazon Echo Buds, the superb Sony WF-1000XM3, and more recently, the AirPods Pro. And while we still think highly of the Galaxy Buds, there’s no doubt that these newer entrants have dominated consumers’ thoughts and buying plans.

So what would the still-theoretical Galaxy Buds+ need to make a dent in this new world?

This one is kind of a no-brainer. Battery life in true wireless earbuds has been improving steadily and in some cases — like the recently released Master & Dynamic MW07 Plus (there’s that naming convention again) — that improvement has been radical: The MW07 Plus deliver a staggering 10 hours of time between charges. The original Galaxy Buds are no slouch, with six hours of battery life, but clearly we should be expecting more.

We really like the flat response of the Galaxy Buds, and their sound quality fared really well when we compared them to the AirPods and the Jabra Elite 65t. But just as the playing field has changed on other features, sound quality has been getting better, too. The MW07 Plus are the best in our opinion, but the Sony WF-1000XM3 and AirPods Pro are also excellent. To compete with these products, the Galaxy Buds+ will have to sound significantly better than the Galaxy Buds.

More juice in the charging case

The Galaxy Buds’ charging case is already pretty sweet. It’s tiny and can be charged via USB-C or wirelessly via a Qi charging mat or even off the back of newer Galaxy smartphones. However, it has an anemic battery capacity, which can really only deliver a single recharge to the buds before it too is dead. The standard these days is at least three or four full recharges, and the gold standard is closer to six. The Galaxy Buds+ need a charging case that stays small and keeps the wireless charging ability, while also delivering more portable power.

With the appearance of the Sony WF-1000XM3, the Echo Buds, the AirPods Pro, and the MW07 Plus, one thing is clear: Some form of active noise cancellation is the new high bar for true wireless earbuds. In order for the Galaxy Buds+ to grab a foothold amongst these competitors, they need this feature, too.

The Galaxy Buds already have an excellent ambient sound mode that lets the outside world in, so adding true noise cancellation seems like an obvious step up for Galaxy Buds+.

Just how water-resistant do true wireless earbuds need to be? That will depend on what you want to do while wearing them. The Galaxy Buds are IPX2-rated — the very lowest amount of water protection that has an official rating attached to it. It lets them survive small encounters with small amounts of water, but not much else. Given that the AirPods Pro are IPX4, and Jabra models like the Elite 65t and Elite 75t are IP55 or better, Samsung could greatly expand the number of places the Galaxy Buds+ could go if it bumped up their level of protection.

When will the Galaxy Buds+ arrive?

To reiterate, all we have is a single support page on Samsung’s website as evidence that the company is planning to release a new set of true wireless earbuds. However, we are fully expecting that Samsung will debut its next flagship smartphone —  the Galaxy S11 — sometime in 2020, probably around Mobile World Congress in February. If history is any indicator, this will also be the moment that Samsung introduces the Galaxy Buds+.