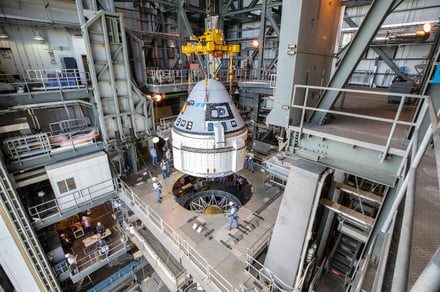 Boeing’s Starliner space capsule will have to wait a couple of extra days before it can make its first test flight into space.

The launch date for the uncrewed mission to the International Space Station (ISS) has been pushed to December 19 after an issue was found with the United Launch Alliance (ULA) Atlas 5 rocket that will carry the capsule to the orbiting outpost.

“During pre-launch processing of the Atlas V, there was an issue with the rocket’s purge air supply duct,” ULA said in a notice posted on its website. “Additional time was needed for the ULA and Boeing teams to complete an analysis of the issue, replace the duct, and complete processing ahead of launch.”

All of the necessary work will be carried out on the launchpad in Cape Canaveral, Florida, where both the Atlas V and Starliner have been in place since November 21.

The short delay doesn’t appear to present a serious problem for the mission, which was originally slated for December 17.

A successful mission will be a major step toward crewed launches to the ISS, possibly as early as next year.

There is competition, though. SpaceX, led by billionaire entrepreneur Elon Musk, has also been testing its Crew Dragon capsule ahead of crewed missions to the ISS, the first of which could also take place in the next 12 months.

But both Boeing and SpaceX have, up to now, suffered various setbacks with their plans to get their respective capsules ready in time. In November 2019, for example, one of the Starliner’s parachutes failed to deploy following a test of its launch abort system, while in April, SpaceX saw its crew capsule explode during a ground-based test of its thruster system.

Whether Boeing or SpaceX, whoever wins the race to ferry astronauts to the space station in the next year or two will have the accolade of becoming the first to launch a crewed mission from U.S. soil since the retirement of the Space Shuttle program in 2011. NASA currently relies on Russian Soyuz spacecraft to get its astronauts to and from the space station.

We’ll be sure to update with any further developments regarding the December 19 launch.