Apple forced to face lawsuit over its troublesome butterfly keyboard 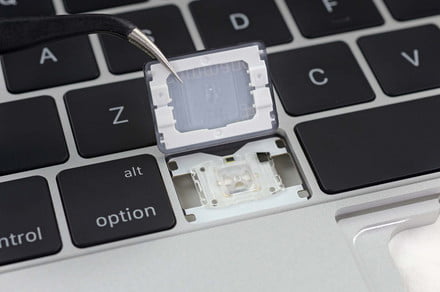 Apple has failed in its effort to persuade a judge to dismiss a class action lawsuit launched against the company in connection with the faulty “butterfly” keyboard that sold with some of its laptops.

The lawsuit, which was filed in May 2018, claims that a keyboard design that launched with MacBook and MacBook Pro laptops starting in 2015 (it doesn’t cover MacBook Air machines with the same issue) allowed dust and other debris to settle beneath the keys, causing them to stick or stop working altogether. While many keyboards can suffer similar issues over time, it’s been suggested that Apple’s keyboard had an inherent design flaw that resulted in a greater failure rate, which ultimately led to the class action lawsuit.

Despite Apple’s wish to have the lawsuit thrown out of court, U.S. District Judge Edward Davila in San Jose, California, said it should be allowed to proceed, Reuters reported. The decision means the tech giant will have to defend itself against a number of allegations, including that its troubleshooting program failed to provide an effective fix for the keyboard issue.

The lawsuit also accuses the company of failing to fully compensate customers for costs incurred while they went about arranging repairs for the faulty keyboard.

We’ve reached out to Apple for comment on the case and we will update this piece if we hear back.

Beginning with the launch of the MacBook in 2015, Apple replaced the traditional “scissor” key mechanism with the “butterfly” design as part of efforts to make the machine as slim as possible. MacBook Pro and MacBook Air updates over the following years included the same mechanism, but a growing number of complaints suggested there was something seriously wrong with the design.

In response, Apple launched a special webpage showing users how to resolve the issue by holding the laptop at 75 degrees before spraying compressed air at the malfunctioning keys. One angry owner even wrote a song about it to vent his frustrations.

In 2018, the company followed up with a repair program for affected MacBook, ‌MacBook Pro‌, and MacBook Air laptops. The program is still running, but the faulty keyboards are being replaced with one sporting a similar mechanism and are therefore also at risk of failing — a point also raised in the lawsuit.

The launch of the 16-inch MacBrook Pro in 2019 finally saw Apple give up on the troublesome butterfly keyboard, with the company reverting to a more traditional design that should prove more reliable for owners.

Apple will be keen to put this damaging episode behind it, but this week’s ruling means it still has plenty of work ahead to deal with the disgruntled users who launched the class action lawsuit.