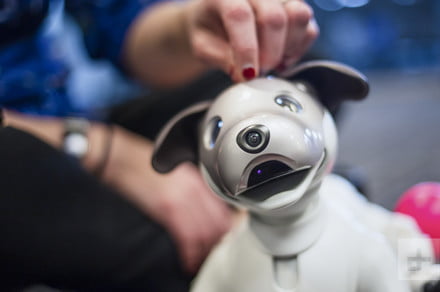 A new update to version 2.5 of the software powering Sony’s adorable Aibo robot dog enables programmable tasks, as well as the ability to feed it with virtual food.

A previous update for Aibo from earlier this year introduced version 2.0 and the Aibo Patrol feature, which Sony described as “a new service built on the concept of ‘securitainment’ (security and entertainment).” The latest update for the robot dog further delves into Aibo’s robotic half.

The version 2.5 software update launches a web-based application programming interface that offers access to the Aibo Developer Program for seasoned developers and Aibo Visual Programming for novice programmers. Access to the API is free, but Sony said that it is not capable of changing Aibo’s emotion, character, or mood.

The Aibo Developer Program lets you create new applications, traits, and experiences for Aibo. It’s really meant for serious programmers, while Aibo Visual Programming is a tool Aibo owners with limited coding experience can use to create tasks for their robot dog, with an easy-to-use drag-and-drop user interface.

Raw video of some of the office’s first interaction with Aido.

The software update for Aibo also improves the My Aibo App with a new feature named Aibo Food. Owners will be able to use bonus coins to purchase meals called Aibocrisps (really!), virtual food that may be fed to the Aibo. The feature will also work in the future with a new food bowl accessory, which the app will recognize and fill with virtual food for Aibo to enjoy.

Owners earn bonus coins by signing in to the My Aibo App at certain intervals, and through special events. There is also an option to purchase coins in exchange for real-world money.

With the addition of a feeding option, it’s only logical to think Aibo will need some potty training as well. Sony thought so too, adding that with a new Mapping feature. Aibo can now also be trained to “be quiet,” and to be carried in an upright position.

Aibo comes with a hefty price tag of $2,900, so taking care of the robot dog is definitely not for everyone. But the million dollar question isn’t whether you can afford it. It’s “can Aibo replace Fido?” If you’re thinking about it, read what happened when our own Kim Wetzel introduced Aibo to her life … and her 4-year-old. In a word: we’re smitten.