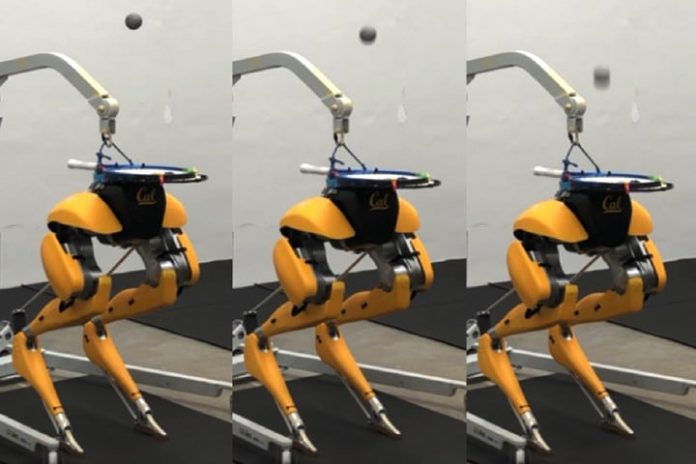 Every day, robots are proving themselves capable of doing more and more tasks with impressive levels of dexterity. The latest example of this? Cassie Cal, a two-legged ostrich-looking robot belonging to the University of California, Berkeley. In a recent demo video, Cassie Cal is shown off carrying out an impressive juggling display that would have Santa Monica Pier’s finest street performers worrying that their jobs are going to be automated.

The juggling uses an external motion capture system to track the location of the ball. Beyond this, however, the whole routine is entirely self-contained and autonomous. As can be seen in the video, the juggling doesn’t involve hands, the way most humans would juggle. Instead, it more closely resembles a soccer player bouncing a ball on their head, adjusting their bodyweight by shifting left, right, forward and backward to keep it bouncing.

This, in fact, turns out to be the point of the project. While juggling (of a sort) is certainly impressive, the real goal was to show how a robot is able to dynamically carry out this action while maintaining balance to avoid falling over. The Hybrid Robotics department responsible for the project views its work in these terms:

“Our research lies at the intersection of applied Nonlinear Control and Hybrid Dynamic Robotics. Our goal is to design controllers for achieving dynamic, fast, energy-efficient, and robust maneuvers on hybrid and underactuated systems such as legged and aerial robots. This will require addressing the challenges of high degree-of-freedom, high degree-of-underactuation, nonlinear, and hybrid systems with unilateral constraints, operating in stochastic and hard-to-model regimes.”

With that understanding, the importance of a juggling robot becomes much more apparent. This isn’t just about building a robot that can pull off a neat party trick; it’s about showing that robots can carry out multiple dexterous actions at once without fail. As advanced as many of today’s robots are, there are still plenty of examples of robots eating it when trying to mulitask. Having the awareness to do this will help make tomorrow’s robots far more effective.

According to a report from IEEE Spectrum, the researchers hope to add multi-ball juggling or more complex moves in the future. Worst-case scenario, it could always hire itself out for parties!

The Eufy by Anker RoboVac 15C robot vacuum cleaner is down to $179.99 on Amazon. The street price for this
Read more
News

A bold departure from an iconic franchise.What you need to knowYoshinori Ono has worked at Capcom for 30 years and
Read more
News

Get quick access to your favorite MacOS settings.
Read more

The Eufy by Anker RoboVac 15C robot vacuum cleaner is down to $179.99 on Amazon. The street price for this
Read more

A bold departure from an iconic franchise.What you need to knowYoshinori Ono has worked at Capcom for 30 years and
Read more

Motorola made just the right changes to give the Edge the cost advantage it needs compared to its performant stablemate.
Read more