Home News Watch the evolution of a galaxy, from the Big Bang til today
News

Watch the evolution of a galaxy, from the Big Bang til today 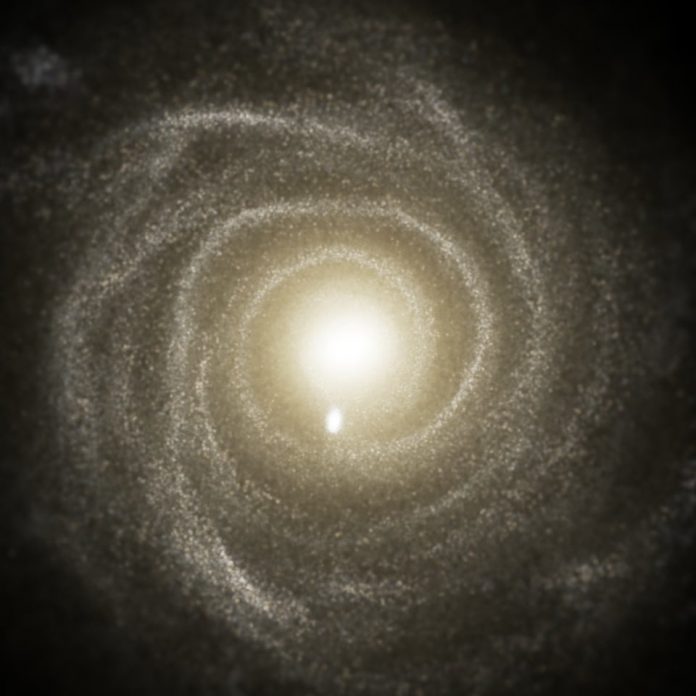 To learn how galaxies change over time, scientists have created the most complex ever simulation of a galaxy, called TNG50. The data from this simulation were used to create the video above, which shows the evolution of a massive galaxy from near the beginning of the universe in the Big Bang right up until today.

In the main panel of the video, denser gas is represented in lighter colors and thinner gas in darker colors, while the inserts at the bottom show dark matter in the lower left, and star and gas distributions in the lower right.

The full simulation is a “universe in a box,” according to the Royal Astronomical Society, combining both the scale of cosmological simulations with the level of detail usually only seen in studies of individual galaxies.

Image of the optical light emitted by the stars of a spiral galaxy from the TNG50 simulation. D. Nelson (MPA) and the IllustrisTNG team

The total space simulated is more than 230 million light-years across, though it can show phenomena that are a million times smaller. With this simulation, astronomers can look back to the earliest formation of galaxies and see how they have changed over the universe’s 13.8 billion year history.

To crunch the massive amount of data required for this project, researchers couldn’t use just any old computer — they need the Hazel Hen supercomputer located in Stuttgart, Germany, and they used over 16,000 cores working 24/7 for more than a year to build the simulation.

A key part of simulating the movements of galaxies is the modeling of dark matter, which we know must exist but have never directly observed. Particles representing dark matter are included in the simulation, as are representations of stars, cosmic gas, magnetic fields, and supermassive black holes. In total, there are more than 20 billion particles in the simulation.

“Numerical experiments of this kind are particularly successful when you get out more than you put in,” Dr. Dylan Nelson of the Max Planck Institute for Astrophysics said in a statement. “In our simulation, we see phenomena that had not been programmed explicitly into the simulation code. These phenomena emerge in a natural fashion, from the complex interplay of the basic physical ingredients of our model universe.”

A particular finding relates to disc galaxies like our Milky Way. By looking at the simulation, scientists could see how orderly disc galaxies emerged from the young universe which was chaotic and disorganized. As the universe aged, the gas within it settled and new stars were born into increasingly circular orbits.

“In practice, TNG50 shows that our own Milky Way galaxy with its thin disc is at the height of galaxy fashion: Over the past 10 billion years, at least those galaxies that are still forming new stars have become more and more disc-like, and their chaotic internal motions have decreased considerably,” lead author Dr. Annalisa Pillepich explained in the same statement. “The Universe was much messier when it was just a few billion years old!”