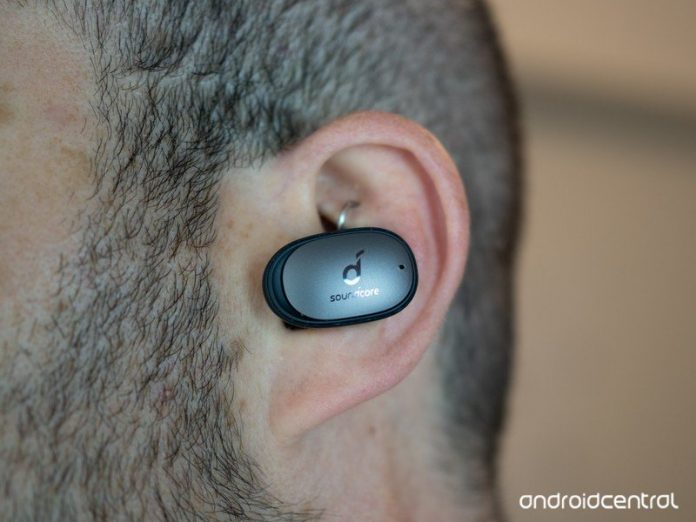 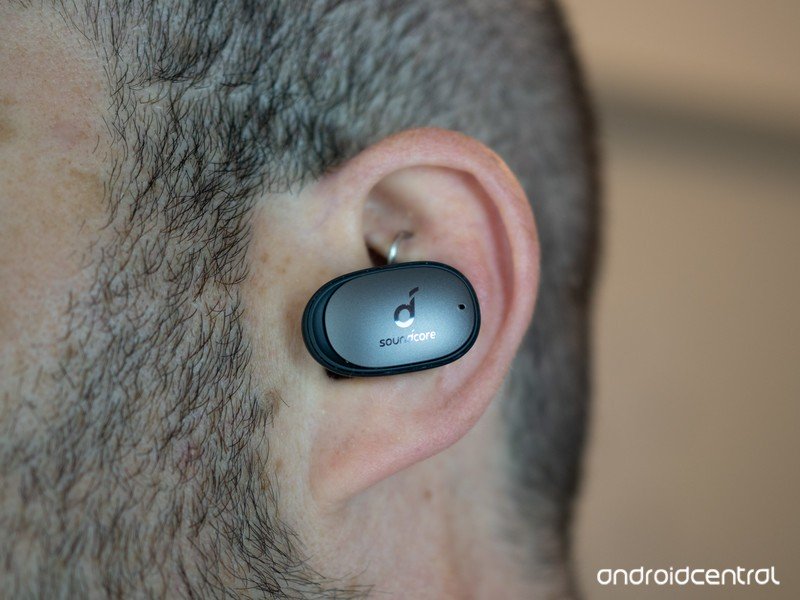 I make a point not to believe the hype, to scrutinize typically hyperbolic marketing materials as closely as possible. And Anker’s Soundcore brand has never held back on the marketing mumbo jumbo.

To wit, the company’s latest set of true wireless earbuds, the Liberty 2 Pro, purport to offer an Astria Coaxial Acoustic Architecture to produce sound that’s been “endorsed by 10 Grammy award-winning producers.” In fact, there’s so much smoke-blowing going on that I wouldn’t blame anyone for letting their suspicions get the better of them and walking away entirely.

But that would be very much the wrong decision. The Liberty 2 Pro are an incredible pair of true wireless headphones that are easily worth their steep $150 asking price. But should you buy them over similarly-priced products from Samsung, Jabra, Jaybird, and others? Yes, with a few caveats.

Let’s dig into it. 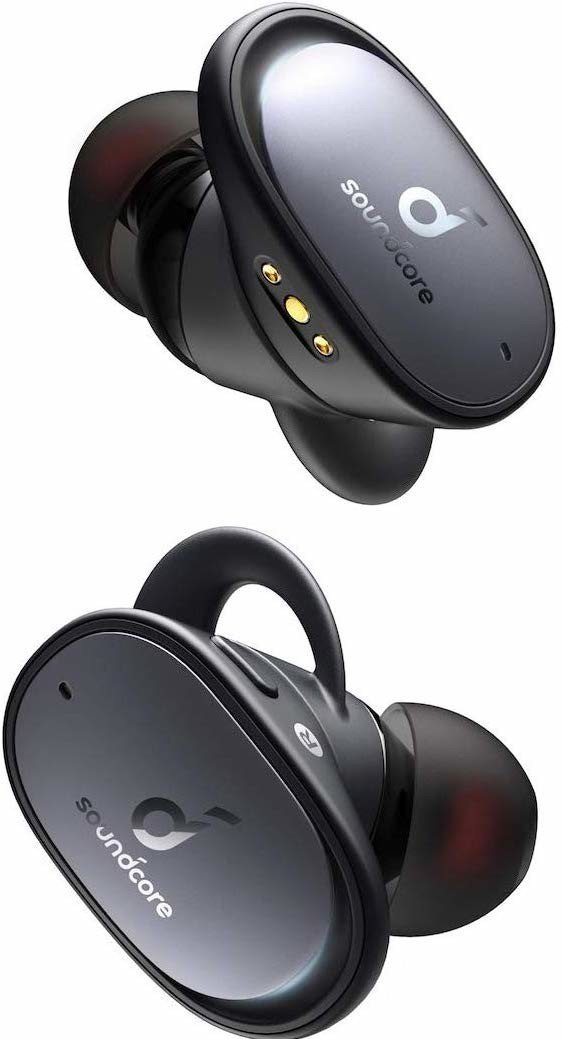 Bottom line: Soundcore’s best and most expensive true wireless earbuds are truly worthy of the “pro” moniker, offering the best sound in the category under $200.

What I love about these headphones 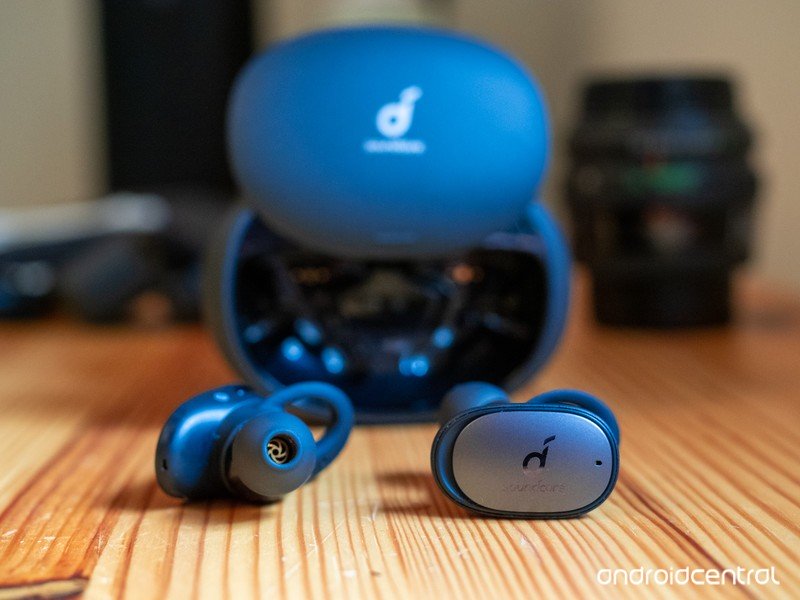 Anker isn’t the first name I think of when I consider high-quality earbuds, but that was true of power adapters, wireless chargers, battery packs, and more just a few years ago. The company has come a long way in a short time, and its newfound focus on the lucrative headphone market has led to quick iteration.

The company’s major foray into true wireless came with the Zolo Liberty, Liberty Air and Liberty Neo, relatively cheap-and-cheerful products that tried to capture some of the burgeoning interest in AirPods without charging anything close to Apple’s asking price. But they weren’t very good. To its credit, though, the Liberty Air had enough going for them — solid audio quality and nice-enough looks — that Soundcore probably sold a boatload. 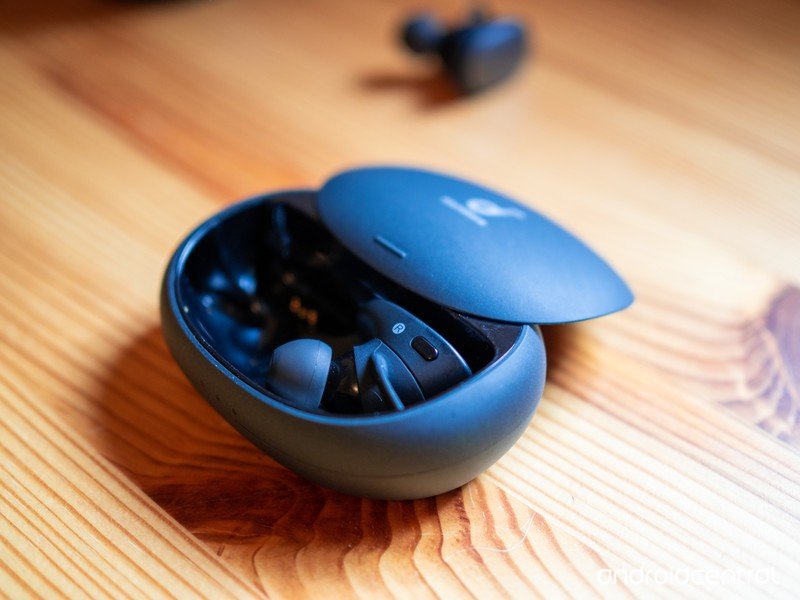 Which leads us to round two, and the most expensive true wireless earbuds the company’s ever made. The Liberty 2 Pro employ dual drivers, one a custom 11mm round dynamic driver and the other a compact Knowles balanced armature that work together to run the gamut of deep bass, accurate mid-range and accurate but sibilance-free highs. In doing all that, Anker created one of the most comfortable pairs of earbuds I’ve ever worn, with enough ear tip and wing options to appease the most finicky of ears.

These are pretty big earbuds, but their massive drivers justify it — these sound amazing for the price.

Let’s start with the case, though: the earbuds rest in an oversized pebble-shaped container whose top slides back like a showcase. The outer layer is adorned in a grey matte finish that repels scratches quite nicely but holds onto fingerprints a bit too generously. The USB-C port is, for some reason, hidden behind a little plug, but at least it is USB-C. You can’t really take such things for granted these days, though at $150, I’d expect nothing less. A single button sits next to the port to activate Bluetooth pairing.

The earbuds clank into place inside the case thanks to strong magnets, though their orientation is not intuitive, since it requires some hand gymnastics after removing them from your ear. Trust me, it doesn’t seem odd until you have to do it, and then it will tick you off forever. It’s not a problem, per se, just a weird quirk. 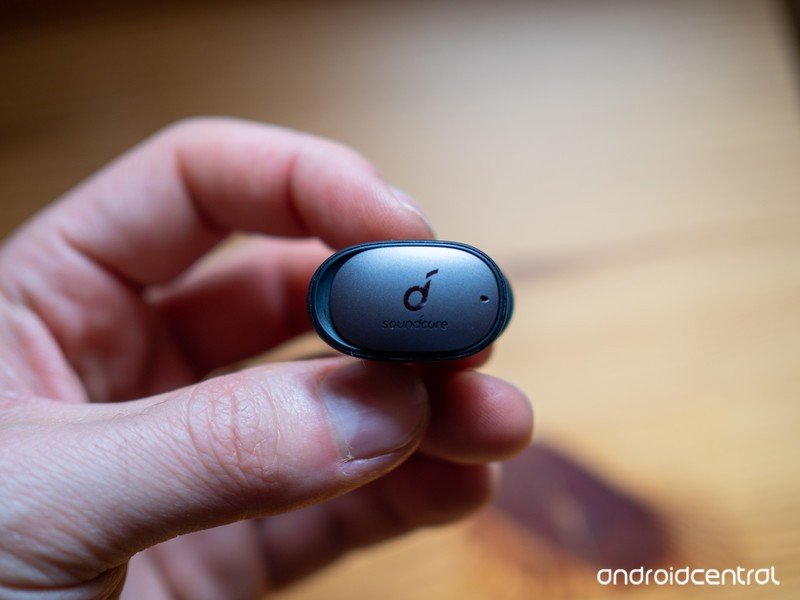 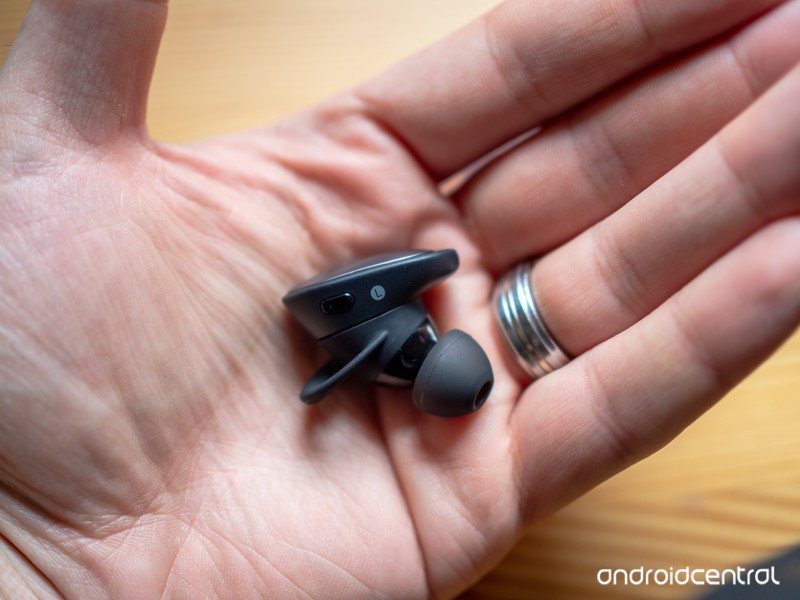 But none of these quibbles matter once the Pros are in your ear. They’re amazing. The dual-driver setup produces some of the best audio I’ve ever heard from the category, eclipsing everything under $200 in accuracy, dynamic range, soundstage, bass output, and every other metric I believe in.

They also support Qualcomm’s aptX codec, which is of slightly higher quality than the traditional AAC or SBC ones most true wireless earbuds default to. And thanks to an elongated design that resembles Sony’s WF-1000XM3 more than a little bit, they passively isolate without needing to be shoved in your ear like a horrible Q-Tip accident.

Anker’s Soundcore app could use with a few more features, but as it is it’s pretty useful.

The beauty of the design is that you just need to insert the ear tip slightly into the ear canal and twist to lock it into place. I’m someone who’s had to quibble with earbud placement for years, so whenever I find a design that doesn’t fight me, I’m more than pleased. That Soundcore does everything possible to find comfort in any ear shape — I changed the tip size from medium to large, for what it’s worth — is an additional bonus.

The sound quality can be enhanced somewhat by Soundcore’s HearIQ, an app-based EQ optimizer that asks the listener to relax, find a quiet spot with limited background noise, and identify tones at various frequencies. It’s meant to identify the upper limits of a user’s hearing and adjust the headphones’ equalization accordingly. My results ostensibly formed a nice low-midrange bump along with some slight treble gain, but the effect on music was extremely subtle — it impacted the music far less than Jaybird’s equivalent (and far slicker) process with the Vista.

Raise your arms in the air with me — there are no finicky gestures here, just a good ol’ clicky button.

Still, I appreciate its presence along with the ability to change the function of the single button on both earbuds. Yes, I buried the lede a bit, but if you’re sensible human like me, you’re going to like what I say next: you don’t have to mess with buggy, inconsistent touch controls or gestures on the Liberty 2 Pro. Soundcore sensibly understood that a discrete physical button, especially one that doesn’t dislodge the earbud itself when depressed, is a far better experience.

Each button takes two forms: single press, or press-and-hold, allowing you to customize next song/previous song, volume up/down, or phone assistant activation, and it’s all quickly done through the app. The only issue I’ve found is that the settings are device-dependent: they aren’t stored on the headphones and need to be set up again with every paired device, which is a huge bummer. 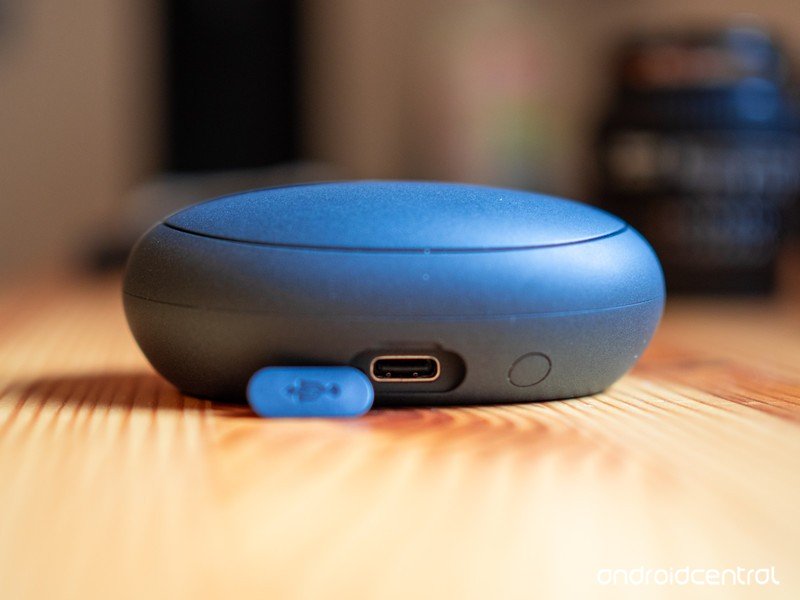 Connectivity is good, too. The earbuds are independent, meaning they make individual connections to a paired phone. This sounds inconvenient, but it allows each one to be connected to separate products if that’s your thing (think on a plane when a partner or kid forgot their headphones). The headphones are generally smart enough to sync up, as long as they’re both in the case when the lid is opened, but it’s easy enough to connect to the stray if you choose to go from mono to stereo.

A couple more niceties: the earbuds are rated IPX4, which isn’t quite enough to withstand a torrential downpour but should hold up just fine for workouts. Oh, and the case supports Qi wireless charging, which is outstanding for convenient top-ups.

And the final point in the pro column: battery life is astoundingly good. Eight hours from the buds themselves, and three additional charges from the (admittedly huge) case. It took me a stupid amount of time — over a week, I think — to get the earbuds and case down to zero, and only 90 minutes over USB-C to get back to 100%.

Where these headphones could improve 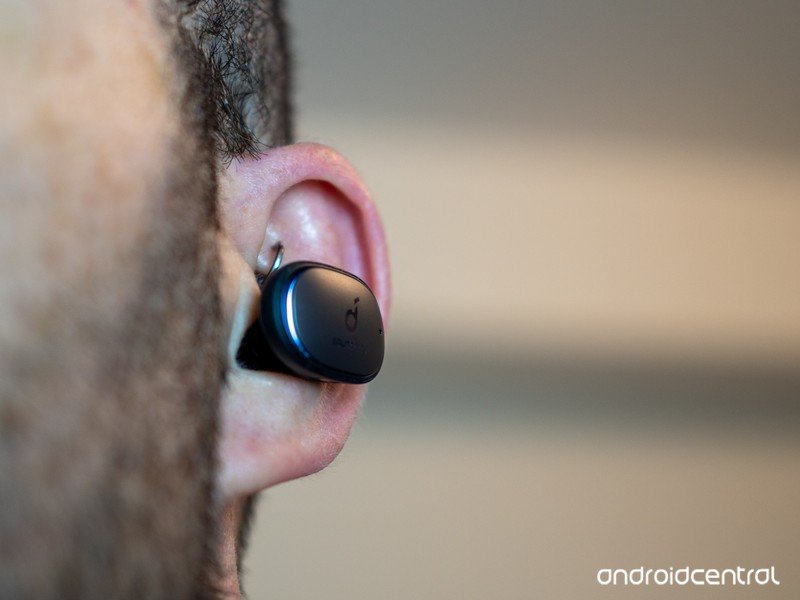 Things aren’t perfect in Soundcore land, unfortunately. A case that holds pretty big earbuds and a massive battery needs to fit it all comfortably, so Anker made the decision to embiggen it to uncomfortable proportions. It’s getting to be jacket weather over here in Canada, so I’m not wanting for pocket room, but if it was still jeans-and-t-shirt weather, I’d balk at having to carry this case around in my pocket.

The only major issue with these earbuds is how bad they sound for making phone calls.

My other quibble is minor: there’s no ambient sensor on the earbuds, so they don’t pause when you remove one or both. Even worse, Anker didn’t feel it necessary to build in a passthrough mode, making it a requirement to remove at least one earbud to have a conversation. It’s a feature combination I’ve grown to love on the Galaxy Buds, and for $150, I think these Anker should have included them here. 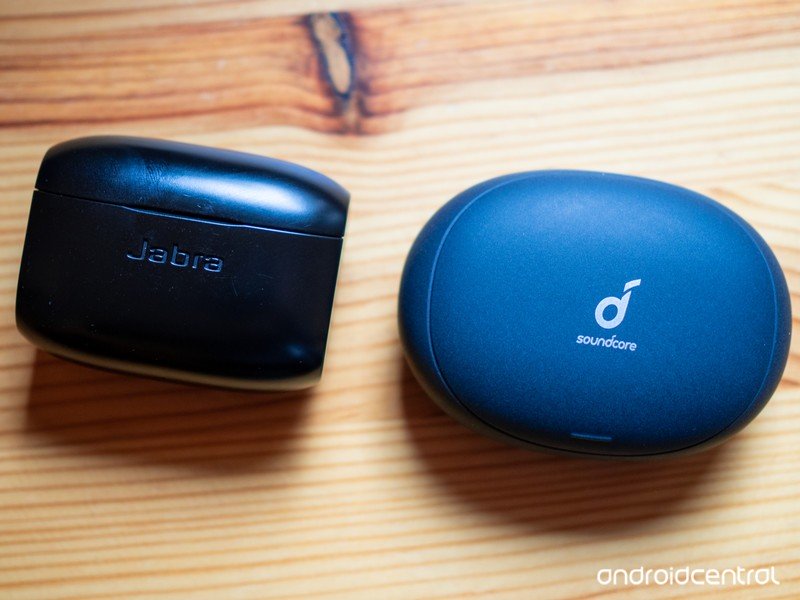 My biggest beef, though, with the Liberty 2 Pro is what my colleague Andrew Martonik had with the Liberty Air, though those cost half the price: the microphone quality is trash. Anker says that there are four microphones that combine with Qualcomm’s cVc algorithms to isolate voices and eliminate background noise, but every caller I spoke to told me I sounded like Charlie Brown’s teacher. Womp, womp. This is clearly an area Anker needs to improve, especially given the quality of audio playback.

If you need true wireless earbuds, consider the Liberty 2 Pro 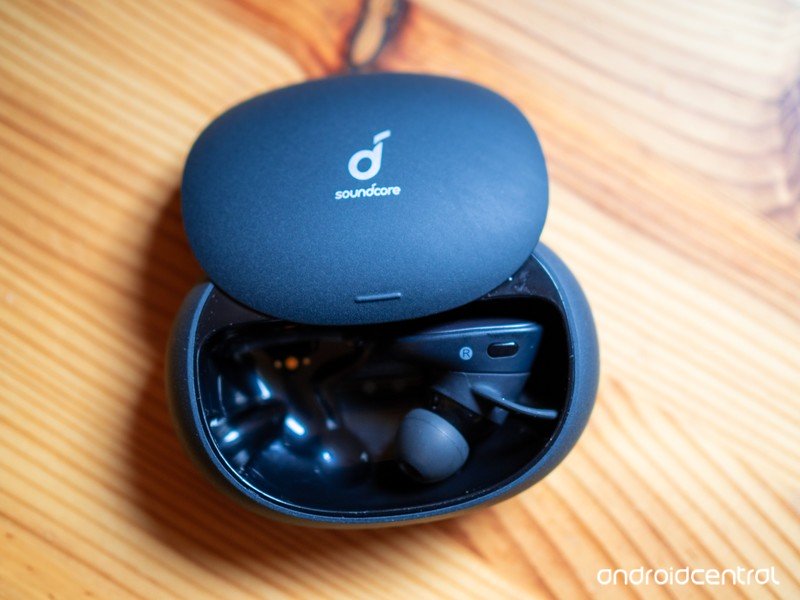 I’m rarely blindsided by a product’s quality, but Soundcore’s Liberty 2 Pro earbuds took me by surprise. From a sound quality perspective, you’re not going to find anything close at this price. These sound closer in fidelity to the $230 Sony WF-1000XM3 or the $300 Sennheiser Momentum True Wireless.

They’re not perfect — they’re a little bulky, the case is awkward, call quality is tin-can bad, and they’re not great if you like long walks in the rain — but if it’s sound for the dollar you’re looking for, these are a great fit.

Anker’s back with a vengeance

A feast for the ears

Soundcore’s best and most expensive true wireless earbuds are truly worthy of the “pro” moniker, offering the best sound in the category under $200.

Facebook
Twitter
Pinterest
WhatsApp
Previous articleIs the Amazon Echo Show 5 better than the Lenovo Smart Clock?
Next articleGoogle Pixel 3a vs. Pixel 3a XL: Which should you buy?