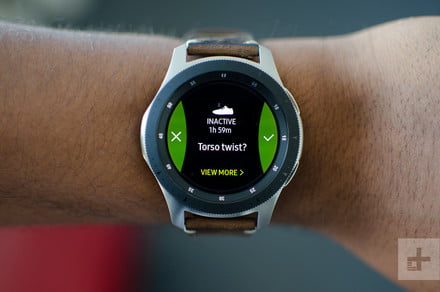 The new software is available through an update, and brings a number of awesome new features to older devices. The features aren’t necessarily groundbreaking, but they should be helpful additions for Galaxy Watch users.

For starters, you’ll get deeper Bixby integration, which will allow Galaxy Watch owners to use their watch to control routines or other SmartThings devices. That’s good news for those creating a smart home within the Samsung ecosystem.

Other features include the new Touch Bezel interface, which allows users to control the device by swiping around the interface in a rotary action — simulating a rotating bezel. That should make scrolling through longer lists a little easier. Samsung Health is getting a bit of a boost too. With the update, you’ll be able to record laptop times when tracking runs or cycling activity, which should be helpful for those who need a device for training.

There are a few other small tweaks too. Most notably, there are new ways to customize the device, through the new “My Style” watch face. Users can take a photo of their outfit for the day, and the watch face will match the colors. ensuring that no matter what, your watch always matches what you’re wearing. Samsung also notes that users will now have access to 24 new subdials and complications, in addition to the 17 that were already available.

The update is rolling out to U.S. customers now, and will be available in other regions in coming weeks. As mentioned, it’s available for the Galaxy Watch and Galaxy Watch Active, both of which are considered to be some of the better smartwatches currently available. They have since been replaced by the Samsung Galaxy Watch Active 2, but if you’re in the market for a smartwatch on a budget, then the original devices are still worth considering.