The Galaxy A71 is likely to be launched sometime early next year. 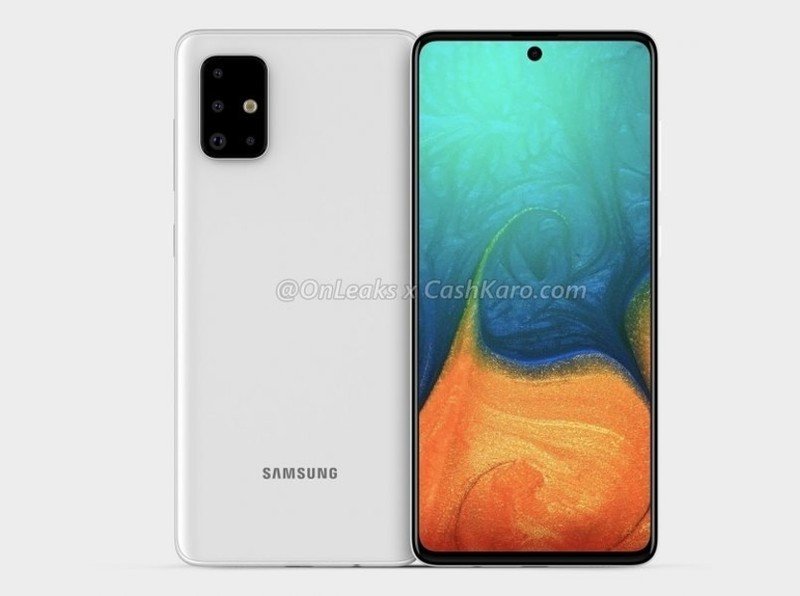 Earlier this month, we got our first look at Samsung’s upcoming Galaxy A51 mid-range smartphone, courtesy of leaker @OnLeaks. The reliable leaker has now teamed up with CashKaro to give us our first clear look at another upcoming A-series smartphone from Samsung, the Galaxy A71.

The renders suggest the Galaxy A71 will not be very different from the Galaxy A51 in terms of design. It will have a single hole-punch cutout at the top of the display, similar to the Galaxy Note 10 series. The phone will also have minimal bezels on all sides.

On the back of the phone, we see an L-shaped quad camera array with an LED flash. If rumors are to be believed, the Galaxy A71 will come with a 48MP primary sensor, a 12MP ultrawide lens, 12MP telephoto lens, and a ToF sensor for portrait shots. The hole-punch cutout on the front of the phone is tipped to house a 32MP selfie camera.

According to @OnLeaks, the Galaxy A71 will feature a 6.7-inch display and its dimensions will be 163.5 x 76 x 7.9mm. Just like its predecessor, the phone will come with an in-display fingerprint sensor.

As far as the rest of the tech specs are concerned, the Galaxy A71 is rumored to be powered by a Qualcomm Snapdragon 675 chipset under the hood, paired with 8GB of RAM. The mid-range smartphone will also pack a large 4,500mAh battery, identical to the current Galaxy A70s. On the software front, Galaxy A71 is expected to debut with Android 10 out of the box, featuring Samsung’s One UI 2.0 skin on top.

Facebook
Twitter
Pinterest
WhatsApp
Previous articleAmazon kicks off its Black Friday Week with up to 47% off its hardware
Next articleLaptop buying guide: What to look for in 2019 and what to avoid