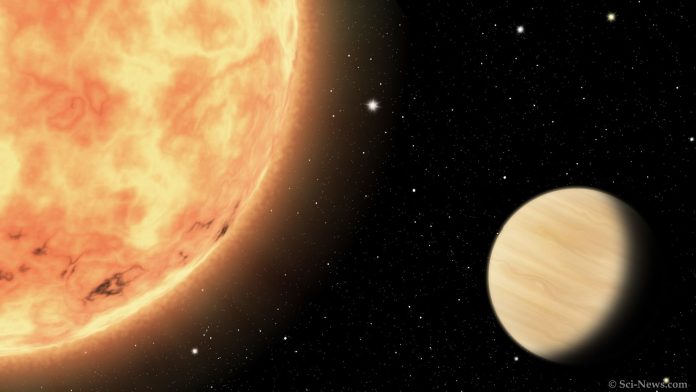 An artist’s impression of a hot gas giant and its host star. Sci-News.com

Astronomers have used data from NASA’s planet-hunting satellite, TESS, to make an unusual discovery: A planet around the size of Neptune orbiting extremely close to its star. Planet TOI-132b has an orbital period of just 2.11 days and its surface temperature is estimated to be a scorching 2,032 degrees Fahrenheit (1,111 degrees Celsius).

Hot Neptunes are rare, as although astronomers often find planets the size of Jupiter or slightly larger than Earth in orbits near to their stars, very few planets the size of Neptune have been discovered this close. Astronomers believe this may due to atmospheric loss, as Neptune-sized planets close to their stars lose gases from their atmosphere and are rapidly eroded into smaller Earth-sized planets.

This has lead to a phenomenon that astronomers refer to as the “Neptune desert,” an area around a star in which Neptune-sized planets are almost never found.

“Although Neptune-sized planets orbiting Sun-like stars are fairly abundant, at short orbital periods they are very rare,” researcher Dr. Matias Diaz of the Universidad de Chile and colleagues said in their paper. “A number of early studies indicated a lack of Neptune-sized planets with periods shorter than 2-4 days, and the term ‘Neptune desert’ was coined to explain this paucity.”

With the discovery of TOI-132b, the researchers have located a hot Neptune sitting right on the border of this Neptune desert. The star around which the planet orbits, TOI-132, is a G-type dwarf star which is 6 billion years old, and is slightly smaller and less massive than our sun.

To understand why TOI-132b survived but other hot Neptunes have not, the scientists looked at the properties of the planet. They found that it is heavy, being about 23 times the mass of the Earth and that it has a rocky core, which makes it dense. This helped the atmosphere of the planet to survive, which likely prevented it from being eroded into a smaller shape. “The survival of the planet’s atmosphere can likely be understood based on its large core mass, and also the incompatibility with being composed of either 100% rock or water,” the researchers said in their paper.

The paper is available to read on pre-publication archive arXiv and will be published in the journal Monthly Notices of the Royal Astronomical Society.

Vape Pen Troubleshooting: 3 Issues and How To Fix Them