Home How to Pick these skills to dominate in Star Wars Jedi: Fallen Order
How to 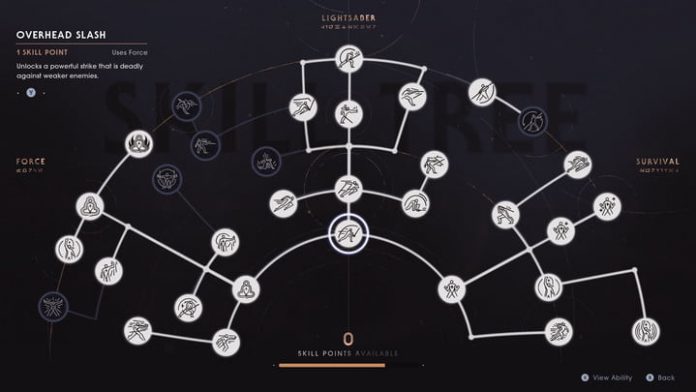 Star Wars Jedi: Fallen Order isn’t a role-playing game, but it does still include an upgradeable skills system that allows protagonist Cal to become more powerful and gain new abilities. Mastering the skills you learn is crucial to your success, especially when it comes to the game’s later bosses. In order to complete your mission, you’ll need to know which skills to pick, because a standard playthrough probably isn’t going to include every available unlocked skill. With this Star Wars Jedi: Fallen Order skill guide, we’ll explain the process and tell you the skills you should focus on.

How to get new skills

You can only unlock new skills in Star Wars Jedi: Fallen Order while at a meditation point, which are the “bonfires” of the game and are located fairly generously across each planet. Once you locate one, you can spend any available skill points you have to purchase new skills.

You will not have access to all skills from the very beginning. Keep playing through the story and you will get access to abilities at pre-planned points. Your skill tree often expands once you reach these points, drastically changing your available moves and attacks.

Skill points are earned through nearly everything you do in the game, including defeating enemies and locating collectibles. Don’t worry about “farming” the points, as you will have plenty to work with. If you are killed, your progress toward your next skill point will be reset, but you can get it back by damaging the enemy who killed you or returning to your point of death if you were killed by an environmental hazard.

Overhead Slash and Leaping Slash (1 point and 2 points, respectively): Overhead Slash is a powerful lightsaber strike that can instantly kill weaker enemies and deal significant block meter damage to bosses. Leaping Slash adds a second attack to the end of the combo, which can deal extra damage after breaking their block meter with the previous attack.

Dash Strike and Improved Dash (1 point each): Quickly close the distance to an enemy and perform a powerful slash with Dash Strike. You can jump at end of dash to leap over enemy while you attack. Improved Dash increases the range of the attack.

Sprint Strike (1 point): Attack while you’re sprinting to perform a powerful single lightsaber strike. This is a good option if you are out of Force power and still need to close the gap on a boss in a hurry.

Evasive Kick (1 point): Perform a quick kick at your enemy after evading an attack. This move is particularly useful after dodging an unblockable attack from a boss – you’ll be able to tell because they will start glowing red.

Lightsaber Mastery (3 points): Increases all lightsaber damage. Against late-game bosses, the difference it makes can mean victory versus death, and will limit your need to use extra Stim healing items in battle.

Survival Skills, Enhanced Survival Skills, and Expert Survival Skills (1 point, 1 point, and 2 points, respectively): These increase Cal’s maximum life. You will need to unlock the first tier before moving onto the next. This is not the only way to increase your total life – you can also find special power-up secrets across the game – but it’s pretty much required in order to beat the later bosses.

Improved Stims and Personalized Stims (1 point and 2 points): These improve the healing power of individual Stim canisters. At the start of the game, they only heal about halfway, and the effectiveness will appear lower as you gain more overall health. Upgrade your Stims as soon as possible.

Superior Blocking (1 point): This allows Cal to block more attacks before his guard breaks. Against bosses and enemies with very small parrying windows, as well as ranged enemies, this will be extremely useful.

Agile Deflection (1 point): This automatically blocks blaster bolts whenever Cal is sprinting, letting you focus on your primary target without concerning yourself with nearby Stormtroopers right away.

Precision Evade (2 points): You can briefly slow enemies and gain back some Force after performing a Precision Evade. It’s great for charging your Force meter against larger bosses with unblockable attacks.

Force Attunement, Greater Force Attunement, and Ultimate Force Attunement (1 point, 1 point, and 2 points, respectively): This skill increases Cal’s maximum Force, and is used not only for classic abilities like Force Push and Force Pull, but also for certain powerful lightsaber strikes. You’ll want it fully upgraded by the time you reach the end, because some of your late-game attacks take up a ton of Force and are reliable for dealing huge damage to bosses.

Mass Push and Howling Push (1 point and 2 points): Hold the Force Push button to send several enemies backward and even stagger larger enemies. When facing Stormtroopers on a ledge, you can use this to take them all out instantly. Against bosses, you’ll want to be more careful when you try it, but it can help cut down on weaker enemies before you face large targets.

Enhanced Force Recovery (1 point): This allows you to regain more Force when defeating an enemy and regain some Force after you hit a blocking enemy. This is one of the most important skills for facing bosses, as you’ll need to keep your Force meter up in order to eventually break their guard.

How to watch The Weeknd perform ‘After Hours’ virtual concert live

Despite the efforts of the U.S. government, TikTok is still going strong. In fact, it's about to host its biggest
Read more
How to

How to watch Juventus vs Lyon Champions League live stream

After a near-five month break, Champions League football returns today. A number of teams are picking up where they left
Read more
How to

After a near-five month break, Champions League football returns today. A number of teams are picking up where they left
Read more