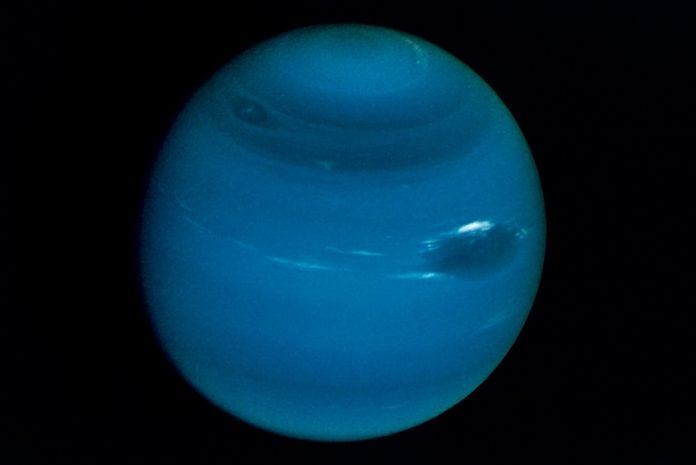 Far out on the edge of the solar system, chilly Neptune takes 165 years to complete a single orbit around the sun. And in orbit around Neptune are 14 moons, some of which are even geologically active. Now, new research reveals more about the movements of the planet’s innermost moons, Naiad and Thalassa, which have a highly unusual, unprecedented orbit.

Naiad and Thalassa are tiny, irregularly shaped moons, both being around 100 kilometers (62 miles) across at their widest points. They also orbit extremely close to each other, with their orbits being only 1,150 miles (1,850 kilometers) apart. However, the two never collide with each other, as their orbits move around each other in what astronomers are called a “dance of avoidance.”

This would give some strange views of one moon from the other. “An observer sitting on Thalassa would see Naiad in an orbit that varies wildly in a zigzag pattern, passing by twice from above and then twice from below,” NASA said in a blog post. “This up, up, down, down pattern repeats every time Naiad gains four laps on Thalassa.”

This type of interacting orbit between two moons has never been observed before, so astronomers are interested in how the pattern could have evolved. “We suspect that Naiad was kicked into its tilted orbit by an earlier interaction with one of Neptune’s other inner moons,” Marina Brozovic of NASA’s Jet Propulsion Laboratory said in a statement. “Only later, after its orbital tilt was established, could Naiad settle into this unusual resonance with Thalassa.”

“We are always excited to find these co-dependencies between moons,” Mark Showalter, a co-author of the paper, said in the same statement. “Naiad and Thalassa have probably been locked together in this configuration for a very long time because it makes their orbits more stable. They maintain the peace by never getting too close.”

Fortnite season 6, week 9 challenges and how to complete them

The Sony Xperia 10 III is up for preorder in Europe, ships in June

Best Nest deals for May 2021: Nest Hello video doorbell from $120 and more