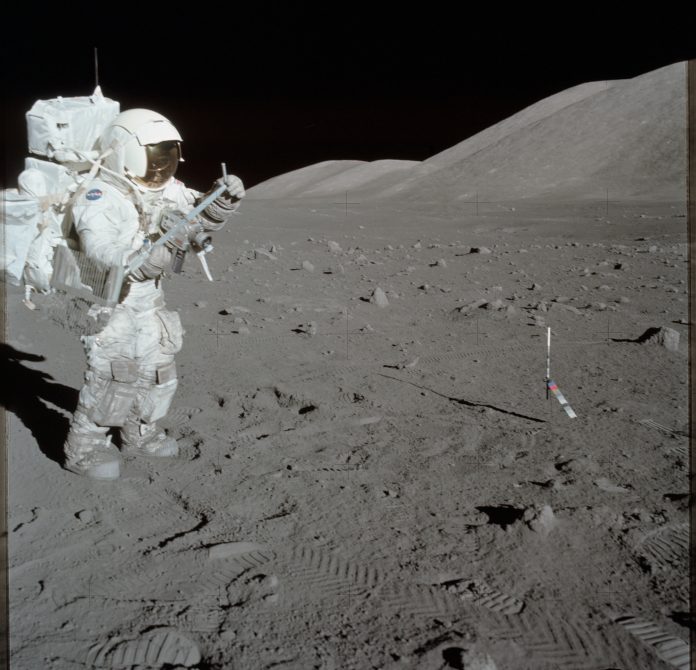 One challenge of lunar landings is something so small you might not even think about it — moon dust. Despite — or perhaps because of — its tiny size, the fine dust that covers the moon’s surface causes a range of technical problems from gumming up electronics to sticking to absolutely everything. It is even potentially harmful to the health of astronauts.

Now, NASA has come up with a solution that could help alleviate the dust problem. It has developed a new coating for use on satellite components, using a technology called atomic layer deposition to apply an extremely thin layer of indium tin oxide, which dissipates electrical charges, onto dry paint pigments. Then, the paint can be applied to satellite components to protect them from the build-up of electrical charges. To test the coating, painted wafers are being bombarded with plasma aboard the International Space Station to see how they hold up.

This technique works for components of almost any shape, and it could be applied to lunar exploration components as well. The moon’s dust problem is partly caused by plasma, as it is the ultraviolet radiation from the Sun which positively charges each dust particle and makes them stick to everything. So it occurred to the researchers that their technique could be applied to moon rovers and spacesuits as well.

“We have conducted a number of studies investigating lunar dust,” Bill Farrell, a scientist at NASA’s Goddard Space Flight Center and head of an organization which studies the lunar environment, explained in a statement. “A key finding is to make the outer skin of the spacesuits and other human systems conductive or dissipative. We, in fact, have strict conductivity requirements on spacecraft due to plasma. The same ideas apply to spacesuits. A future goal is for the technology to produce conductive skin materials, and this is currently being developed.”

The research team will now build a bigger oven to create greater quantities of the charge-dissipating pigment, and then they can apply the coating to spacesuit materials for more testing. Eventually, they may be able to apply the same coating to larger areas like rover surfaces as well.

Facebook
Twitter
Pinterest
WhatsApp
Previous articleHow to use a PlayStation 4 controller on Android
Next articleCommon Samsung Galaxy Note 10 and 10 Plus problems, and how to fix them