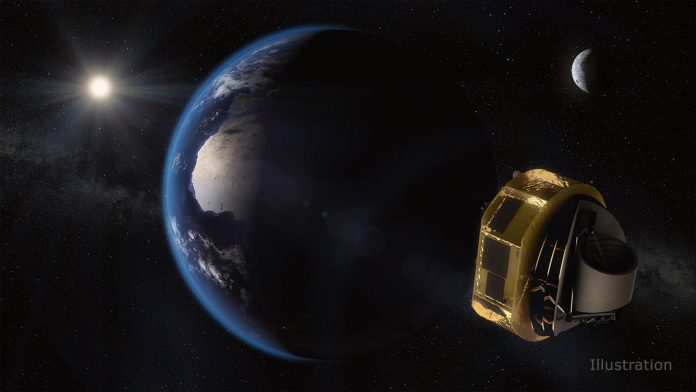 This artist’s concept shows the European Space Agency’s ARIEL spacecraft on its way to Lagrange Point 2 (L2) — a gravitationally stable, Sun-centric orbit — where it will be shielded from the Sun and have a clear view of the sky. NASA’s JPL will manage the mission’s CASE instrument. ESA/STFC RAL Space/UCL/Europlanet-Science Office

The hunt for distant planets or exoplanets will be getting a new tool in the next decade, with the launch of the European Space Agency’s Atmospheric Remote-sensing Infrared Exoplanet Large-survey (ARIEL) in 2028. Now, NASA has announced it will be providing an instrument called Contribution to ARIEL Spectroscopy of Exoplanets (CASE) to the project for deeper examination of distant worlds.

NASA already has one planet-hunting tool in action: TESS, or the Transiting Exoplanet Survey Satellite, which has discovered 29 exoplanets in its first year of operations. TESS detects planets by looking for light from stars which dims when a planet passes in front of them, which is called a transit. The job of ARIEL will be to look at these transit events more closely, to learn more about the exoplanets which have already been located.

ARIEL will observe exoplanets to learn more about their chemical fingerprints, or spectra, which can tell scientists about their atmospheres. By looking at the way light passes through the atmospheres of distant planets when they pass in front of a star, scientists can find out about the composition and temperatures of those atmospheres.

“I am thrilled that NASA will partner with ESA in this historic mission to push the envelope in our understanding of what the atmospheres of exoplanets are made of, and how these planets form and evolve,” Thomas Zurbuchen, associate administrator for NASA’s Science Mission Directorate, said in a statement. “The more information we have about exoplanets, the closer we get to understanding the origins of our solar system, and advancing our search for Earth-like planets elsewhere.”

As you can imagine, trying to peer into the atmosphere of a planet millions of miles away is extremely difficult, so ARIEL will be focusing on each exoplanet for a considerable amount of time. While ARIEL collects information, NASA’s CASE will provide supporting data by looking at the clouds and hazes which are also part of the atmosphere. Together with the ARIEL data, this can give scientists a more complete picture of an exoplanet’s atmosphere.

“This is an exciting time for exoplanet science as we look toward the next generation of space telescopes and instruments,” Paul Hertz, director of the astrophysics division at NASA, said in the same statement. “CASE adds to an exceptional set of technologies that will help us better understand our place in the galaxy.”