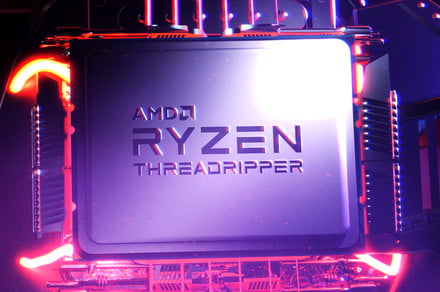 MSI may have leaked AMD’s still-unannounced 64-core Threadripper 3990X CPU in a recent video showcasing motherboards for the new-generation Threadripper CPUs. Although ostensibly designed with the 32-core 3970X in mind, the system clearly had a 64-core chip installed in the video, which accidentally leaked that information to the viewing audience. It showed a full 64 cores and 128 threads running, no doubt spoiling AMD’s planned 2020 unveiling.

This follows an official announcement of the more modest Threadripper 3000 CPUs, and a stellar response to AMD’s mainstream Ryzen 3000 processors.

AMD reportedly planned to tease this as-yet-unannounced CPU around the time of the November debut of the 24 and 32-core Threadripper CPUs, but according to WCCFTech, those plans were pushed back. That might be why MSI accidentally included this shot in its promotional video, as it was a relatively minor point that could have easily been overlooked after AMD changed its mind.

Unfortunately, beyond confirming the existence of the 64-core Threadripper with its full 128-threads, we don’t learn much else from the video. There is no clock speed information within that Task Manager window. As WCCFTech points out, though, based on the expected layout and design of the probable 3990X, we expect this chip to have a total of 288MB of L2+L3 cache, and feature 128 PCIe 4.0 lanes, making it unmatched in either the AMD or Intel high-end desktop (HEDT) product stacks by quite some margin.

Even without the 64-core CPU, AMD’s Threadripper 3000 range is expected to decimate Intel’s best HEDT offerings, and is likely the main reason that the Intel slashed the prices of its new 10th-generation Cascade Lake chips, by up to half. Its flagship, 18-core Core i9-10980XE is priced at just $1,000, whereas its predecessor, the 9980XE, sold for just shy of $2,000 when it launched in 2018.

At this time, the highest core count chip Intel has in the HEDT sector is the 10980XE, and though it has higher core count Xeon server chips — the 28-core W-3175X often tops out benchmark high-score tables — it doesn’t have anything close to 64 cores at the kind of price AMD’s Threadripper chips rest at. AMD’s new Threadripper 3000 CPUs are the more expensive options, with even the 32-core variant sitting at $2,000. A 64-core version would likely come in at a noticeably higher price, but this is a real about-face from just a few years ago, when AMD’s CPUs were the budget options and Intel’s were king of the heap, with a price tag that was effectively up to Intel to set because it had no competition.

Hopefully, we won’t see something similar from AMD now that it sits atop the heap — and looks set to retain that seat through January 2020 at least — but that seems unlikely. A $2,000 price tag for a 32-core chip might be far more than the $1,000 Intel is charging for its 18 cores, but it’s a lot cheaper than the $3,000 it charges for 28 cores. It also only just released the 10th-gen HEDT line, so we don’t expect anything revolutionary from Intel for quite some time.