Mars 2020 mission will search for fossils in the Jezero Crater 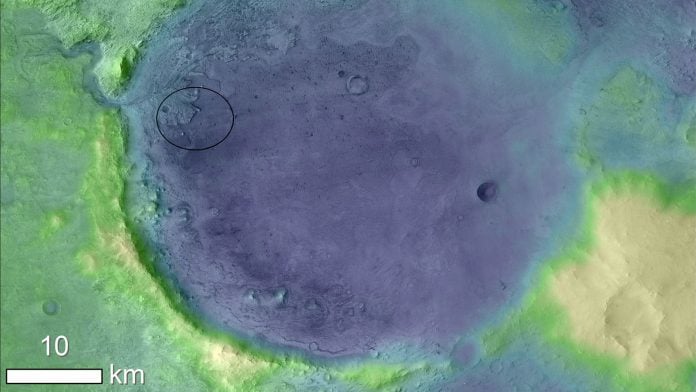 Lighter colors represent higher elevation in this image of Jezero Crater on Mars, the landing site for NASA’s Mars 2020 mission. The oval indicates the landing ellipse, where the rover will be touching down on Mars. NASA

With the Mars 2020 rover undergoing final testing before its launch next year, NASA scientists are turning their attention to the rover’s landing site in Mars’ Jezero Crater. A newly published paper in the journal Icarus has identified mineral deposits around the rim of the crater which mark some of the best places to look for evidence of ancient life on the planet.

The Jezero Crater is the site of an ancient lake that existed around 3.5 billion years ago. At the edges of the crater, scientists found minerals called carbonates which form from the interactions between carbon dioxide and water. The carbonates formed around the shore of the lake like a bathtub ring.

On Earth, carbonates help to form the structure of fossils that can last for billions of years. These fossils include seashells, coral, and rocks formed from microbial life called stromatolites. The presence of carbonates in the Mars crater indicate that these would be the best areas to search for ancient fossils.

The data was collected using an instrument aboard the Mars Reconnaissance Orbiter, called the Compact Reconnaissance Imaging Spectrometer for Mars instrument (CRISM). “CRISM spotted carbonates here years ago, but we only recently noticed how concentrated they are right where a lakeshore would be,” lead author of the paper, Briony Horgan, said in a statement. “We’re going to encounter carbonate deposits in many locations throughout the mission, but the bathtub ring will be one of the most exciting places to visit.”

One of the main purposes of the Mars 2020 mission is to look for evidence of ancient life on Mars, so the carbonate findings are encouraging. “The possibility that the ‘marginal carbonates’ formed in the lake environment was one of the most exciting features that led us to our Jezero landing site,” Mars 2020 Deputy Project Scientist Ken Williford said in the same statement. “Carbonate chemistry on an ancient lakeshore is a fantastic recipe for preserving records of ancient life and climate. We’re eager to get to the surface and discover how these carbonates formed.”

Mars 2020 is set to launch from Cape Canaveral in July next year and should land in the Jezero Crater in February 2021.