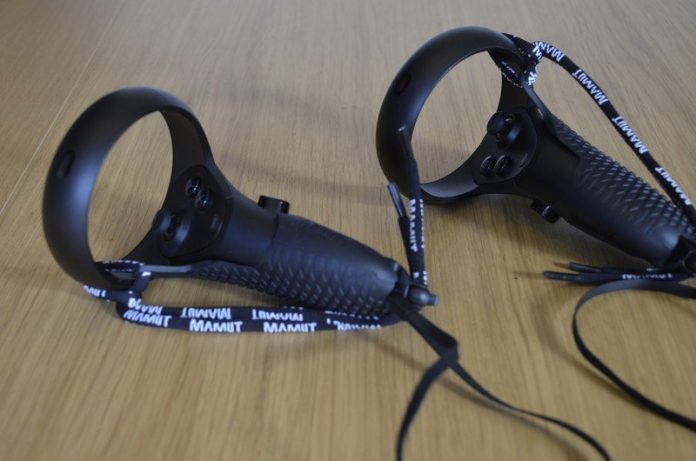 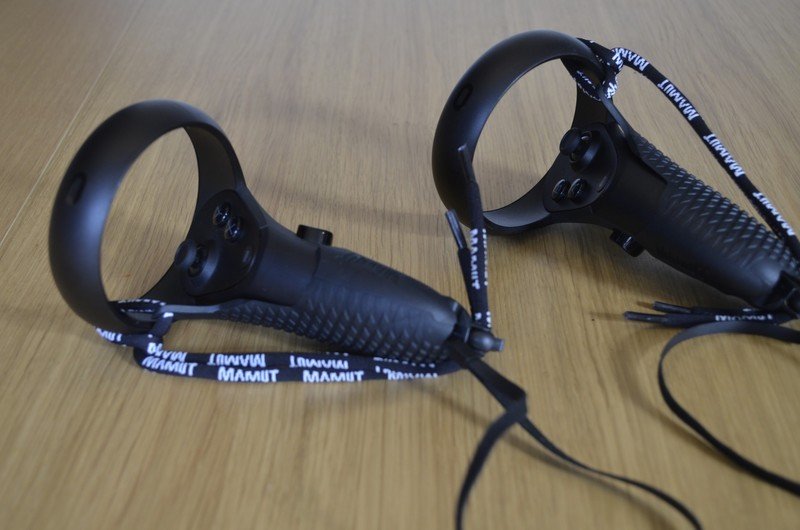 The Oculus Quest delivers an untethered virtual reality experience. It’s a liberating way to play VR because you don’t have to attach your headset to a PC or phone, or use any external cables. While the headset itself is untethered, the Oculus Touch Controllers come with wrist straps to tether the controllers to your hands. The stock straps are nice and make sure you don’t throw a controller into a wall while playing Beat Saber, but some people prefer an au naturel feel. You can remove the wrist straps, but you’d have to be a real thrill seeker to take that risk. The Mamut Touch Grips for the Oculus Quest let you securely attach the Oculus Touch Controllers to your hands without requiring a wrist strap. Bottom line: The Mamut Touch Grips securely attach the Oculus Touch Controllers to your hands and allow you to open your hand completely while using VR, but their shoelace-style straps can be difficult to make comfortable.

What you’ll love about the Quest Deluxe Head Strap 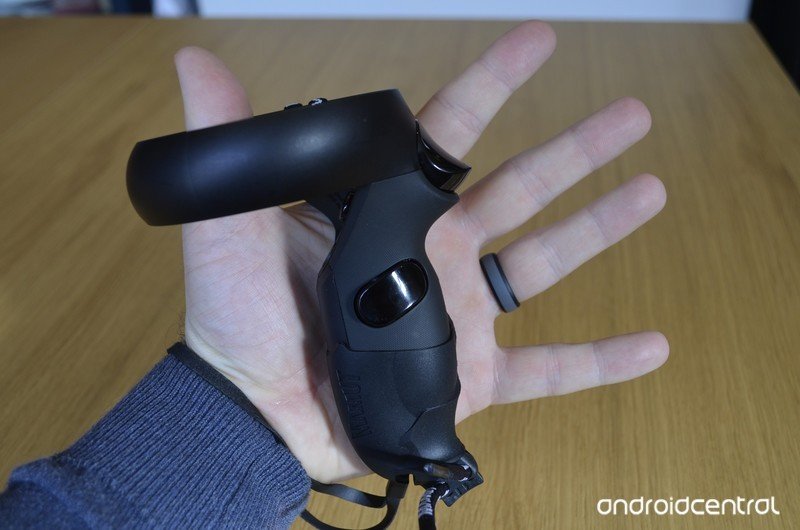 I find the Oculus Touch Controllers light and comfortable out of the box. I only use the wrist straps to make sure I don’t sling a Touch Controller into a wall while playing a game. I’ve heard too many horror stories about the Wii remote to not be cautious about these things. While I’ve never felt hindered by the wrist straps, I was curious about the Mamut Touch Grips due to their popularity. The Mamut Touch Grips provide three main advantages: freeing your hands, keeping the battery door in place, and adding grip.

In a sense, the Mamut Touch Grips aim to emulate the Valve Knuckles controllers. They allow you to freely open your hands when not interacting with any buttons or joysticks. This doesn’t matter as much for games when you’d always want your hands on buttons and sticks but is a welcome addition when playing a game like Robo Recall: Unplugged. In Robo Recall: Unplugged and similar shooting games, you often toss a gun away when it’s out of ammo and reach down to grab a new one. Being able to fully release your hand and reach for a holster at your hip feels more natural than continually holding something through the process.

I also liked using the Mamut Touch Grips in SUPERHOT VR. That title requires you to throw knives, ninja stars, and other items at enemies. It feels cool to release your hand when you throw something.

The Mamut Touch Grips also bring a couple of quality of life improvements in added grip and securing the battery door. The Touch Controller’s magnetic battery doors can slip out of place when you move quickly or swipe across them. The Mamut Touch Grips wrap these up and keep the doors in place. They also add a bit of extra grip that’s more resistant to sweat than the body of the Touch Controllers.

What you may dislike about the Quest Deluxe Head Strap 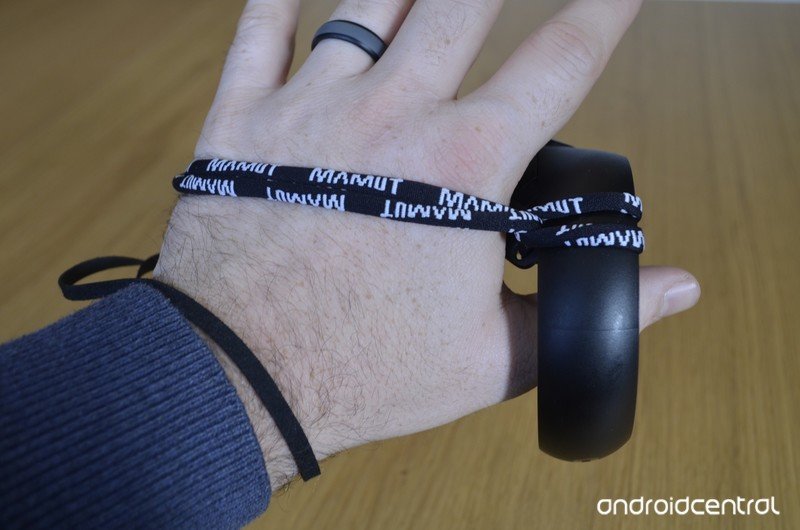 As much as I like the concept and some aspects of the Mamut Touch Grips, I just don’t love them, in fact, at times I don’t even like them. I’ve never felt comfortable in them, struggle to adjust them to a point where I don’t notice them, and found them difficult to install if I wanted to use them in conjunction with the wrist straps. Part of me wonders if my hands just weren’t made for these grips, which I’ll come back to later.

During my testing, I wanted an extra layer of security, combining the Mamut Touch Grips and the stock wrist straps that come with the controllers. This is technically possible but requires forcing a plastic rectangle through a tiny hole that’s hard to reach. I actually broke one of the pieces of my wrist straps while trying to put it through the Mamut Touch Controller. Once in, they worked fine, but I felt they should have been much easier to install.

I also found that the Mamut Touch Grips put my hands and thumbs at an awkward angle. I felt like it was more difficult to reach the buttons when using the grips. This could just be caused by the shape of my hands, but it’s been very noticeable over the last few weeks.

At the end of the day, it feels like I’ve tied Oculus Touch Controllers to my hands with shoelaces.

Adjusting the Mamut Touch Grips involves pulling two strings through a component. It works, but it’s far from elegant. I feel a bit like a boxer that needs helps getting his gloves on when seeking the right fit. If the grips are too loose, they’re pointless, so I like them a bit snug. Getting this fit was difficult, especially for my second hand.

My biggest gripe with the Mamut Touch Grip is the overall design. At the end of the day, it feels like I’ve tied Oculus Touch Controllers to my hands with shoelaces. They look like a cheap and awkward add-on, feel odd on your hands because it’s two strings stretched across the back of your hand, and they’re difficult to adjust.

This brings me back to my earlier point about my hands not being meant for these grips. Everything I’ve said above is true, I just don’t like the look and feel of these grips, but to get a second opinion and make sure I wasn’t too harsh, I asked my wife to try them on. The first thing she said was, “they feel natural.” She later said, “I actually think they’re quite nice.” So, maybe I have freakish hands that can’t be contained by the strings of the Mamut Touch Grips. Maybe they need some work to fit more hands. I can only really judge them based on my weeks of testing. For me, they just don’t work as well as I’d like.

Should you buy the Quest Deluxe Head Strap? I like the concept behind the Mamut Touch Grips, but it’s hard for me to recommend them. For $30, you’re getting what feels like two shoelaces attached to a mold. I never really loved the feel of them and struggled to reach a point where they weren’t regularly noticeable. My wife thought they felt great, so there’s a chance it comes down to the size and shape of your hands. I’d at least be aware that they might not fit your hands well when considering them.

I’m currently testing a wide range of Oculus Quest accessories, so make sure to check back in to see which accessories are worth adding to your Oculus Quest.

A freeing strap with some drawbacks.

The Mamut Touch Grips securely attach the Oculus Touch Controllers to your hands and allow you to completely open your hand while using VR, but their shoelace-style straps can be difficult to make comfortable.