Home News I bought a Ryzen laptop, and I liked it
News

I bought a Ryzen laptop, and I liked it 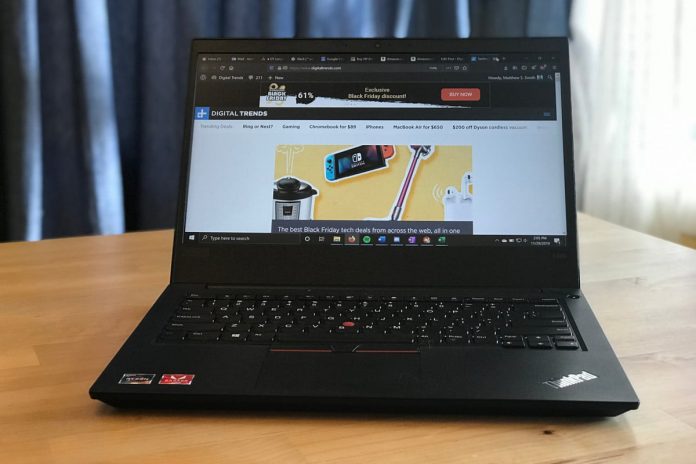 Intel has laptops in a full-on, stylish, WWE-style chokehold. Laptops are flopping around on the mat, meekly trying to slap away Intel’s strong, brutish arms.

If you buy a laptop, it’s probably going to have Intel Inside. You likely won’t even consider another option. You might not even know there is another option.

I’m here to tell you there is. AMD’s mobile Ryzen processors are available in many budget laptops, work just as well, and often cost less. So, should you save a few bucks and buy an AMD Ryzen laptop?

No sacrifice in speed

I found myself eyeing an AMD Ryzen laptop a few months ago. The time had come to buy a new personal laptop for everyday use. My needs aren’t extravagant. I play games on a dedicated desktop, so my laptop only needs to handle Word, web browsing, and – well, that’s about it. My only demand was a USB-C 3.1 port with Power Delivery and DisplayPort for one-cable connection to my monitor. My budget? Around $600.

I was curious, but unsure. Does the Ryzen 7 3700U hold up against the Core i5-8265U? Ryzen’s reputation is solid, but AMD’s older A-Series APUs gave the company a bad rap.

Ryzen mobile also lacks the core count advantage it has on desktop. The Ryzen 7 3700U is a quad-core processor, just like the Core i5-8265U.

Yes, the Intel processor is a little quicker, but the gap isn’t large enough to notice.

Surprisingly, despite its budget pricing, the AMD Ryzen mobile processor shines. It’s slightly slower than Intel’s competition in Geekbench 5 single core, with a score of 746 against the Intel chip’s 926. But it’s basically tied in multi-core testing, with a score of 2,656 vs. 2,725.

Yea, the Intel processor is a little quicker, but a gap like that isn’t large enough to matter in everyday use. Most modern CPUs are quick enough for web browsing and basic productivity in Microsoft Office (or your Office alternative of choice). Ryzen is no exception.

AMD’s Ryzen 7 3700U even has a bonus; RX Vega 10 graphics. The Vega 10 is a modest integrated graphics solution that can’t handle most modern games, but it more than double’s the performance of Intel UHD 620 graphics (according to 3DMark Fire Strike). That gap does matter.

I’ve already used it to play older games, like Half-Life 2 and Diablo 3, at reasonable framerates. I use a gaming desktop for most my gaming needs, but if the RX Vega 10 can handle a game, I’ll play on my laptop. That wouldn’t be an option with the Intel alternative.

Don’t fret about the battery

Benchmarks eased any performance concerns I had before I purchased my ThinkPad E495, so its effortless speed isn’t a surprise. My worry was battery life. AMD’s processors have a reputation for being less efficient than Intel’s.

Despite that, battery life is fine. I’ve yet to run it dead during everyday use and, in most situations, the laptop loses about 15 percent of its charge per hour. It’ll endure six to seven hours of use.

Now, I know what you’re thinking. Six hours? That doesn’t sound great. Here’s the catch. The budget-minded ThinkPad E495’s battery is small. At 45 watt-hours, it’s 15 percent behind our favorite laptop, the Dell XPS 13. Yet the XPS 13 is smaller and lighter.

No, the E495 won’t last all day. That’s not AMD’s fault. The laptop’s endurance is adequate, and at $600, that’s not a guarantee. You can find better battery life for $600, but only if you’re willing to compromise on performance or screen size.

I could’ve spent $640 on an Intel-powered ThinkPad E-Series. Instead, I saved $40 and bought the AMD Ryzen variant.

That’s good news if you’re on a budget. There’s no shortage of budget Ryzen laptops available. They’re usually less expensive than Intel alternatives, and they’ll serve you just as well.

Don’t be afraid of the unfamiliar. I have no regrets. I don’t think you will, either.

You don't need to be a professional climate scientist to know that the Earth is in trouble, and reducing your
Read more
News

You don't need to be a professional climate scientist to know that the Earth is in trouble, and reducing your
Read more