Hypervelocity star booted out of our galaxy by supermassive black hole 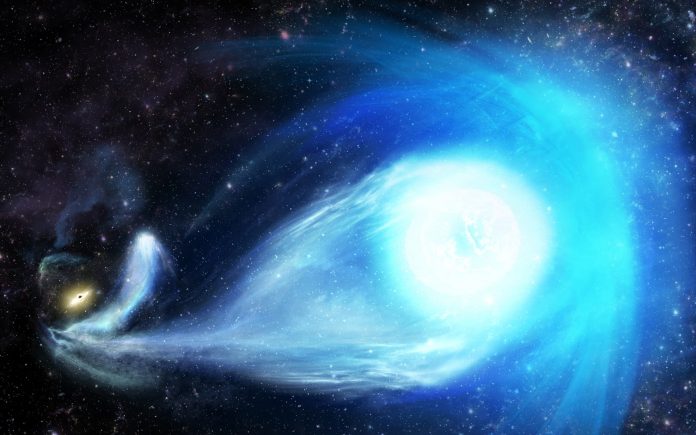 An artist’s impression of S5-HVS1’s ejection by Sagittarius A*, the supermassive black hole at the center of the Milky Way Galaxy. Sagittarius A* and the captured binary partner to S5-HVS1 are seen far away in the left corner of the picture, while S5-HVS1 is in the foreground, speeding away from them. James Josephides, Swinburne Astronomy Productions

Astronomers have detected a hypervelocity star called S5-HVS1 traveling through our galaxy at a tremendous speed of 2.3 million miles per hour (1,017 km/s), making it the third-fastest star ever recorded.

The star is traveling fast enough that it will leave the Milky Way and shoot off into the massive space between galaxies. “S5-HVS1’s velocity is so high that it will inevitably leave the galaxy and never return,” Dr. Douglas Boubert, an astronomer at the University of Oxford, explained in a statement.

The star is currently around 29,000 light-years away, in the constellation of Grus. But astronomers have tracked its path back to its origin and found that it started its journey from the center of the galaxy. At the heart of our galaxy is a supermassive black hole called Sagittarius A*, which the scientists believe kick-started the star on its journey.

“This is super exciting, as we have long suspected that black holes can eject stars with very high velocities,” Dr. Sergey Koposov, a researcher at Carnegie Mellon University, said in the statement. “However, we never had an unambiguous association of such a fast star with the galactic center.”

A supermassive black hole can eject a star via the Hills mechanism, named after astronomer Jack Hills. This begins with two stars in a binary star system that venture close to a black hole. The tidal forces from the black hole disrupt the binary stars’ orbits and can pull one of the pair into orbit around the hole. The other star is ejected away at high speed. This is what happened to S5-HVS1 4.8 million years ago when it began its journey with a velocity of 4 million mph (1,800 km/s).

“This is the first clear demonstration of the Hills mechanism in action,” Dr. Ting Li, from Carnegie Observatories and Princeton University, said in the same statement. “Seeing this star is really amazing as we know it must have formed in the galactic center, a place very different to our local environment. It is a visitor from a strange land.”

The research is published in the journal Monthly Notices of the Royal Astronomical Society.