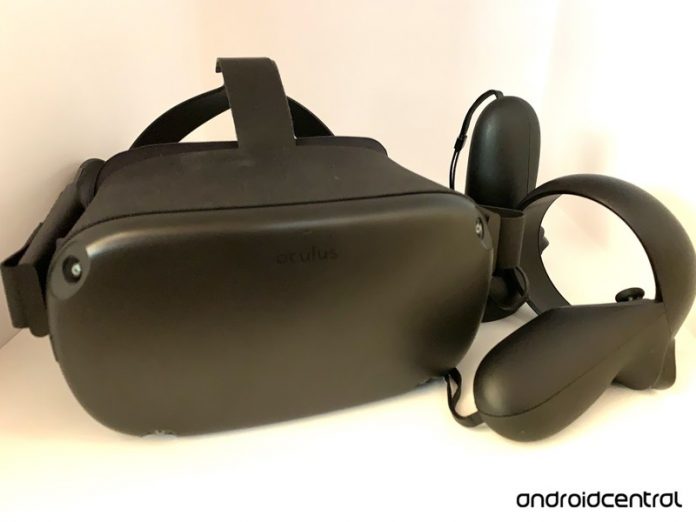 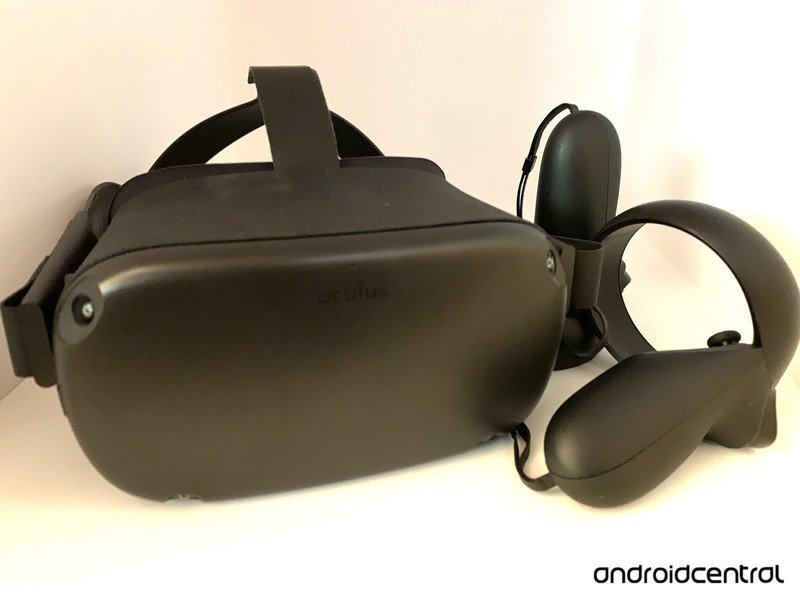 So, you own an Oculus Quest VR headset, and you’re really enjoying all of the great VR games on the Oculus Store. However, SteamVR offers a lot of other amazing VR experiences that you can’t find in the Oculus Store. This step-by-step guide will walk you through the process of setting up your Oculus Quest to play SteamVR games.

Products needed for this guide:

Determine that your computer can support VRidge

Before you can move toward playing SteamVR games on your Quest, you will need to make sure you can run Riftcat’s VRidge software on your PC. VRidge is the softwar you’ll need to do it. Riftcat’s website references cardboard viewers. You can disregard that since streaming to mobile VR and streaming to the Oculus Quest VR headset are the same thing.

Getting your smartphone and your Quest ready

There are only a few steps needed to get you up and running so you can play SteamVR games on your Oculus Quest. They might seem a bit daunting, but thankfully Riftcat’s VRidge software does most of the heavy lifting for you. Your first step is to make sure both your smartphone and your Quest are on the same Wi-Fi signal.

Open the settings on your smartphone and choose Wi-Fi. Make a note of what Wi-Fi signal you are on. You will need this information for Step 3.

Now put on your Quest headset and choose settings in the lower menu to access the menu with Wi-Fi options. Select Wi-Fi and make sure your Quest Wi-Fi is the same as your smartphones Wi-Fi signal. 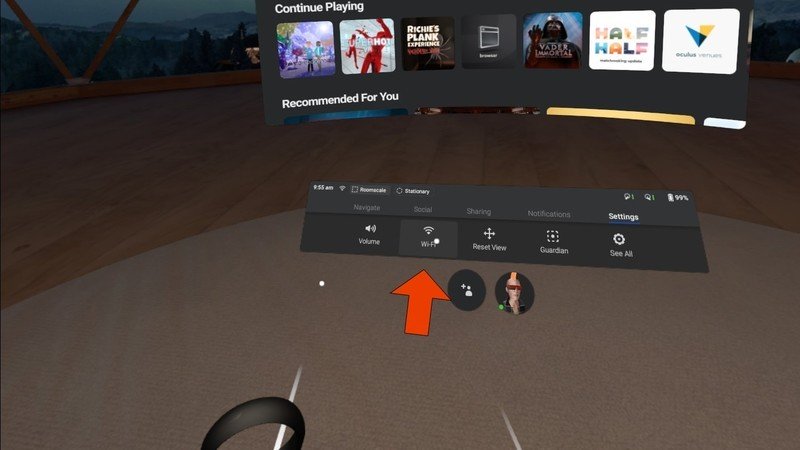 Tap on your headset listing to connect your smartphone’s app with your Quest headset. After you connect, you’ll have an new More Settings option. Click into the menu and select Developer Mode.
Tap the switch so it toggles to blue and Developer Mode will be on.

Get everything ready. Make sure your Oculus Quest, your Quest controllers, and the USB connector that came with it are close by.

Go to the Riftcat website and download VRidge and install the software to your PC.
Launch VRidge on your PC and choose Oculus Quest. 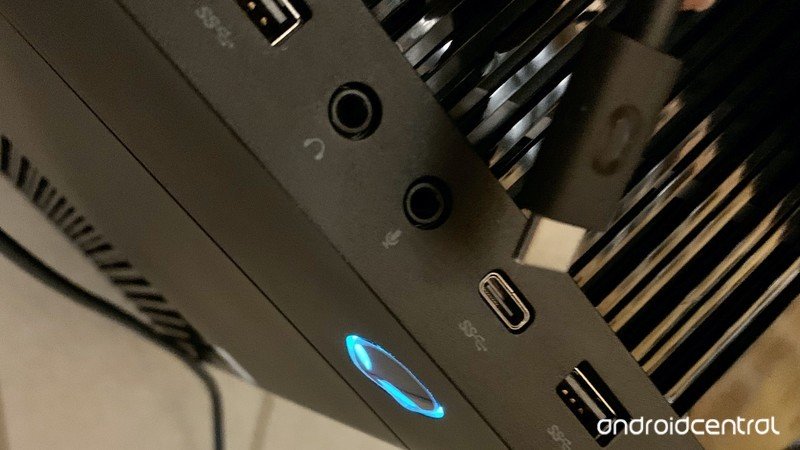 Syncing your Quest with your PC

This step is where it might seem a little scary. However, there is no need to fret. All you are doing is cutting and pasting a script and then hitting enter on your keyboard. Once you’ve done that, all you have to do is put on your Quest VR headset and, using your Quest controllers, give your PC permission to link to the headset. 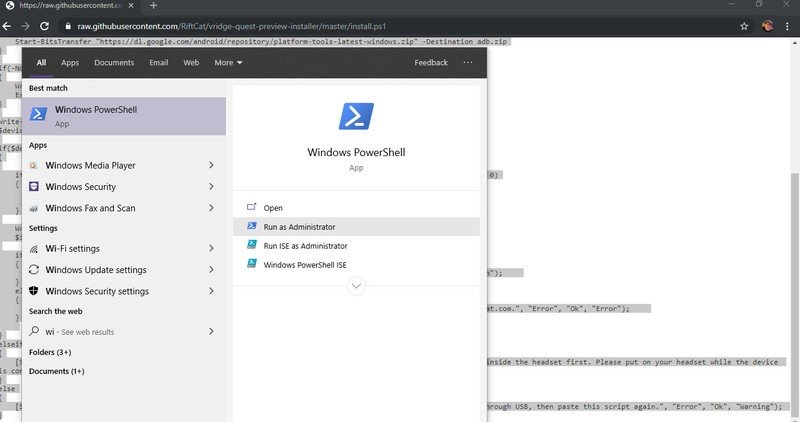 Next, open up your web brower and use this Github link to access the script needed to connect your Quest to your PC. Simply copy the entire script from top to bottom.

Go back to your open Windows PowerShell and paste the Github script into Windows PowerShell and then hit enter. This will automatically perform all of the steps needed so you can stream SteamVR games to your Quest. All you have to do is wait for the process to finish. Once it’s done, you’ll get a notification.

Put on your Quest headset, and go to your library. Choose unknown sources in the sidebar, and launch VRidge within your Quest. On your desktop, open VRidge and start playing. You will then see a message on your PC’s desktop informing you that VRidge is now running on your Quest headset. 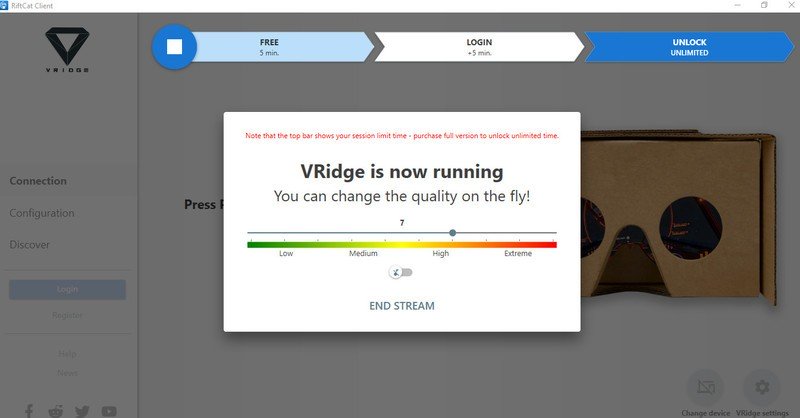 Launch SteamVR on your Quest

Your final step is an easy one. Your Quest is tethered to your PC through the charging cable that came with your VR headset, and you now have Riftcat’s VRidge software running on both your PC and your Quest headset. The only thing left for you to do is set up your Quest headset in the same way that you would with the HTC Vive or any other headset using Steam.

Launch SteamVR on your PC. Create your guardian so you don’t bump into anything.

That’s it! Call your friends! Time for a VR party!! You’ll now be able to use Riftcat’s VRidge to stream several games from StreamVR that aren’t available in the Oculus Store. One thing to mention is some of the graphics might come across a little dull. It’s not enough to ruin your VR experience, but you will notice a slight difference.

The Oculus Quest is already a great VR headset. Still, new firmware updates will soon make the headset even better when Oculus brings in hand tracking, meaning no more controllers! While the Oculus Link will let you tether your Quest to your PC and allow you to play Rift S games. VR without the need for external sensors

The Oculus Quest is a tetherless VR headset that doesn’t require a computer and uses inside out tracking. You can move freely without worrying about tripping over cables or setting up external sensors. It comes in both 64GB and 128GB versions.

SteamVR was developed by the Valve Company and offers VR fans a large number of VR experiences. The company even has its own VR hardware called Valve Index. SteamVR on the Quest There are other ways that you could stream SteamVR games to your Oculus Quest headset, but Riftcat’s VRidge software is the best and easiest way to make this happen. The process doesn’t require a lot of work, and the software does all of the heavy lifting.

Unfortunately, not every PC comes with USB-C input. However, it’s an easy fix with this small, low-profile adaptor that offers super-fast transfer speeds.

Plug your Quest into your PC In case your PC doesn’t have the right input

This adaptor will turn any USB 3.0 input into a USB-C input: super easy and hassle-free plug and play. The adaptor offers data transfer speeds of up to 5 Gbps between connected devices. It also supports up to 2.4 Amps of power output for charging your devices.