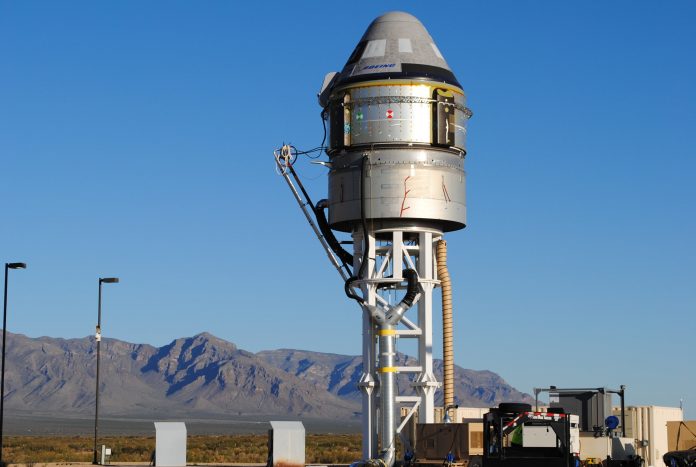 Boeing’s CST-100 Starliner spacecraft and its service module sit atop the test stand at White Sands Missile Range in New Mexico ahead of the company’s Pad Abort Test. The test is scheduled for Nov. 4, 2019, and will demonstrate the spacecraft’s ability to quickly escape the launch pad in the event of an emergency on launch day. Boeing

On Monday, Boeing will perform a key test of its Starliner crew capsule which NASA hopes will eventually ferry astronauts into orbit. The pad abort test is an important part of testing for manned launches and will be aired live on NASA TV.

“The test is designed to verify that each of Starliner’s systems will function not only separately, but in concert, to protect astronauts by carrying them safely away from the launch pad in the unlikely event of an emergency prior to liftoff,” NASA explained in a statement. “During the test, Starliner’s four launch abort engines and several orbital maneuvering and attitude control thrusters will fire, pushing the spacecraft approximately 1 mile above land and 1 mile north of the test stand.”

During the test, the crew module will be ejected away from the rocket and its descent will be slowed with parachutes and landing airbags. It should touch down in White Sands Missile Range, from where it will be collected and brought back to Launch Complex 32 to be analyzed and evaluated.

The commercial crew program is one way in which NASA is working with private companies in the hope of making space exploration more efficient and more affordable. The program has not always run smoothly, however, with delays and technical issues affecting both Boeing’s Starliner and SpaceX’s Crew Dragon capsule development.

The hope is that commercial companies will soon be able to take over the duties of delivering astronauts and supplies to the International Space Station (ISS). Currently, SpaceX performs resupply missions to the ISS but no company has yet declared itself ready to carry astronauts. The first commercial flights carrying astronauts are planned for May 2020 for SpaceX and December 2020 for Boeing.

Boeing’s latest test is scheduled to start at 6 a.m. PT on Monday, November 4, with live coverage beginning at 5:50 a.m. PT. The time window in which Boeing hopes to complete the test is three hours long, with a small amount of leeway to account for weather and other conditions.

You can watch the event live on NASA’s website through its NASA TV channel, or you can watch it right here: